How did a comedy about a group of social misfits become so popular? What is the secret of The Big Bang Theory's success?

The socially awkward fumblings and esoteric conversations of a group of physicists is not the most obvious premise for a sit-com.

Nevertheless, The Big Bang Theory, has become a multi award-winning smash hit. So, what's the secret to the show's success? Although relatively few of us are as intelligent as Sheldon, is there actually a little 'geek' in all of us?

Why is The Big Bang Theory Popular?

Could it be that it appeals to our inner geeks?

On the face of it, The Big Bang Theory should appeal to a fairly small section of society.

After all, since the dawn of theatre, the aim has been to create characters who an audience can either identify with or regard in awe.

Neither of these seems to apply to the geeky boys in The Big Bang Theory.

Relatively few of us have so much as a basic grasp of physics, we don’t spend our evenings playing ‘Mystic Warlords of Ka’a’, nor do we know anyone quite as exasperating as Sheldon.

Nevertheless, there is something here that we can all relate to.

We’re not laughing at Leonard, Sheldon, Howard or Raj (at least, not all of the time). If it were a simple case of laugh-at-the-geeks, the show would not have captured the hearts of a legion of fans.

No, there is much more to it than that and, I suspect, that it is because, deep down, there is a bit of geek in all of us.

I think that we all experience moments of social awkwardness; we’ve each, at one time or another, felt like an underdog and most of us know what it’s like to be interested in something that is just not “cool”.

The vast majority of people spend their entire lives trying desperately to conform, fighting to fit in or to be seen as a stronger member of the herd.

The truth is, I and many other people, relate more to the plight of geeky physicists than we do to the supposedly hip, young things on reality shows, which now seem to dominate the TV schedules - we’ll come back to that heinous subject in a moment.

What the creators of The Big Bang Theory (Chuck Lorre and Bill Prady) have done, is exaggerate our common experiences of ‘outsiderness’, by creating characters who are off-the-scale in their peculiarities, hang-ups and social disasters.

How Many Awards Has The Big Bang Theory Won?

At the time of writing this article, The Big Bang Theory has snagged the following awards:

Witty, scathing, silly and sometime incomprehensible lines from the show

Sheldon: You participate in the mass cultural delusion that the sun’s apparent position relative to arbitrarily defined constellations at the time of your birth somehow effects your personality.

Amy: How did you get into my apartment?
Sheldon: Wow. Is that the kind of nagging I can expect now that you're my girlfriend? Good thing I drew this up.
Amy: What's that?
Sheldon: I present to you the relationship agreement. A binding covenant that, in its 31 pages, enumerates, iterates and codifies the rights and responsibilities of Sheldon Lee Cooper, here and after known as "the boyfriend," and Amy Farrah Fowler, here and after known as "the girlfriend".
Amy: It's so romantic.

Rajesh: Oh, you're so arrogant! If you were a super hero your name would be Captain Arrogant. And do you know what your super power would be? Arrogance!

Penny: How’s your life?
Amy: Like everybody else's - subject to entropy, decay and eventual death. Thank you for asking.

Isn't it Nice to See Something Different?

Although most of us feed on whatever rubbish TV companies throw at us, we crave something with a little substance, don't we?

Our television screens are filled with so-called reality programmes, which are actually just as contrived as a scripted show, but we’ll leave that conversation for another time. These ‘reality’ programs are crammed with people who are famous for nothing other than being famous and we watch numbly, as they go about their ‘housewives’, ‘Jersey’, or in the U.K., ‘Essex’ or ‘Chelsea’ business.

If that’s not your cup of tea, you can watch washed up stars attempting to make a comeback by participating in ‘Celebrity Colonoscopy Live!’ or whatever the latest buzz is.

And then, of course, there are talent shows galore, filled with wannabe starlets, who nobody will remember in six months' time.

Surely, I can’t be alone in craving something clever; something with wit, that has taken a modicum of talent to write, direct and perform? Well, that’s rather a rhetorical question, because I know I’m not alone.

The Big Bang Theory, which was first broadcast in the U.S., in 2007, emerged at the height of the reality-craze wave (as a side note, hopefully, that wave will soon start to ebb). It offered something different, not just in that it was unheard of to fill a sitcom with almost nothing but socially-stunted nerds, but also because - in vast contrast to the other TV fodder we’re force-fed, it is cleverly written, witty, acerbic and, often, so scientifically savvy that most of us simply don’t understand it.

I think the overwhelming majority of viewers want to be challenged by the programs they watch on television and, if that can come wrapped in lots of laughs, all the better!

There's Something to Be Said for Inoffenisve Charm

Who said popular TV shows had to be filled with stupidity, sex, drugs and rock 'n' roll?

In addition to the other aspects of The Big Bang Theory that, I think, contribute to its appeal, it’s also worth mentioning that, on the whole, there is a lot to be said for TV that doesn’t offend anyone.

Typically, the language in The Big Bang Theory is quite tame, as the writers predominantly rely on smarts rather than swears to get their laughs.

In addition, although the characters can be vicious towards each other, the edge of nastiness is shaved off by the obvious affection that exists between them.

There is never anything cruel or mean-spirited about the show’s comedy.

And this, in my opinion, above all else, is the key to The Big Bang Theory’s success.

Yes, we are encouraged to laugh at the characters’ attempts to look “cool” (and that even applies to the ‘ungeeky’ member of the crew: Penny).

But it’s never a case of point-and-laugh-at-the geeks.

We laugh because we know that any attempt to look “cool” is doomed to fail - that’s true of everyone; it’s true of us.

In the end, what The Big Bang Theory shouts loudly and proudly is that it’s okay to be a geek; it’s all right to be different and being super-intelligent, although doing zilch for your street cred, isn’t a disadvantage in every aspect of life.

Personally, I’ll take that message over the fatuous importance placed on beauty, and the almost lauding of ignorance and stupidity espoused by ‘reality’ TV any day of the week.

I love the big bang theory! Great tribute, thanks :)K

I have heard about the show, mostly when they got awards, but never seen an episode. Thanks for heads up on this. Sounds like great fun!

Hello, Yeirl. I agree, 'smart is the new sexy' is a great message - certainly beats the celebration of stupidity that's so prevalent in our society. I hadn't heard of Revenge of The Nerds, but I will definitely check it out.

It's nice to know that television show is promoting, "Smart is the new sexy." Love the show! Does anyone remember the movie, Revenge of the Nerds? Nice change.

Thanks Mladen! Personally, I don't think being a geek is a bad thing. I think we should reclaim the word and begin the uprising. : ) Glad you enjoyed the article and that the quotes gave you a chuckle.

Definitely my favorite TV show! I just don't miss any episode. Am I that geek? :D
Seriously, great article! Those quotes gave me a laugh!

Thanks very much, Janet. Sheldon is my favourite, too. Jim Parsons plays it so well!

We love the Big Bang Theory. Sheldon is awesome. Love your write up....great perspective on the shows popularity.

Where Are All The Funny Girls?

Are women funny? Why is comedy still a male-dominated world? And why don't mo... 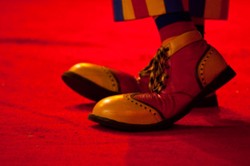 Where Are All The Funny Girls?

Are women funny? Why is comedy still a male-dominated world? And why don't more women want to be comedians?
Loading ...
Error!