The Cat and Bagpipes- Westminster

Through its tavern doors came the famous of London - including a dead prime minister.

The Cat and Bagpipes stood on the corner of Downing Street and King's Street, Westminster. Antiquated, popular, it may once have acted as host to the pilgrims visiting Edward II's tomb in Westminster Abbey. Its most famous caller however was Spencer Perceval, First Lord of the Treasury, and prime minister in the House of Commons. He came not to dine but as the victim of a fatal shooting. Here, an autopsy was carried out and a verdict of murder was pronounced.

On July 2 1783 the Reverend John Michel wrote to his friend Henry Cavendish "I must now beg you to accept my best respects and present my compliments to all friends that may inquire after me at the Society, the Cat and Bagpipes etc when you see them".

The two men shared a passionate interest in all things scientific. Rev Michell, a "little short man of dark complexion, and fat" was deemed an "excellent philosopher" and his claim to esteem was that he mooted the idea that black holes existed.

Henry Cavendish was a like minded philosopher, chemist and physicist who is credited with discovering hydrogen.

Both men were members of the Royal Society that held its meetings at the Mitre Inn in Fleet Street and the Crown and Anchor in the Strand.  It is clear that these gentlemen and their contemporaries also frequented the Cat and Bagpipes as would such eminent figures as Robert Boyle, Joseph Priestly and James Boswell.  Because of its location close to Parliament, a string of contemporary politicians would also have made their way through its doors. One such was George Rose, later Secretary to the Treasury who was said to dine here regularly on a "plain chop."

Violent Death of a Prime Minister

May 11 1812 started off as an unexceptional day.  Business in the House of Commons was conducted as usual. At five o'clock, the First Lord of the Treasury and leader of the house, Spencer Percival descended into the lobby.  A man stepped forward, pointed a pistol at his chest, fired and then quietly took a seat by the fireplace.

In the chaos that followed it quickly became clear that Perceval was mortally wounded and he was removed to the Speaker's house.  The perpetrator still held his pistol but quietly handed it over. When asked what possessed him to shoot Percival he said that his pleas for justice and compensation following his unfair imprisonment in Russia had been ignored and he had been forced to act as he did to draw attention to his case. His name was John Bellingham.

According to Charles Taylor (Literary Panorama Vol II) "The body of Mr Perceval was removed from the Speaker's House during the night to his own in Downing Street; and on the Tuesday morning at 11.0'clock a most respectable jury was summoned to attend at the house of Francis Dukes, at the sign of the Rose and Crown in Downing Street.  After taking a view of the body a verdict was returned of wilful murder against John Bellingham."    The Rose and Crown stood near to the Cat and Bagpipes and other contemporary accounts confirm the inquest took place at the latter tavern.

Five days later Bellingham appeared at the Old Bailey. As he pleased guilty to the crime and there were also many witnesses, a verdict of guilty was quickly brought in. He chose not to accept a plea of insanity and was hanged on May 18.

A meeting of the Newshounds

In his book "Fleet Street and Downing Street,"  Kennedy Jones in commentating on the influence of the press in Parliament observes "...remember at that corner a hundred years ago stood a tavern bearing the unusual sign of the Cat and Bagpipes.  The house and sign may have gone but the symbol remains.  Even today it happens that "the piper pipes and the cat jumps."

One such was George Bridgman aged 80 who died at the Cat and Bagpipes.  During the latter part of the reign of King George III he was "court newsman." and the Gentleman Magazine Vol 102 of 1832 observed that he was "well known about the town for his singular appearance being of very short stature and invariably carrying with him a huge walking stick and a reticule basket."  He was known as the "Poet Laureate of Westminster" and several newspaper offices had granted him a pension for his former services as also did several gentlemen in the Treasury. A 19th century Cash for Questions?

Odd Events at the Cat and Bagpipes

The literary Gazette Volume 8 recalled an incident following a meeting at the Cat and Bagpipes between a land waiter from the Customs House and a man from Manchester.  During a discussion on songs and music the Mancunian challenge the custom man as to his knowledge at which point the land waiter left for his home to collect a large volume of "catches and glees" that he had compiled.  On his way back he was challenged by the Watchman who insisted  on knowing where he was going.  Taking offence the land waiter struck the watchman with his book, commenting that "such is the power of music."

Such anecdotes and rendezvous came to an end in the 1830s.  The land around Whitehall and Downing Street was boggy and unstable. Filled with a jumble of lodging houses frequented by visiting MPs, it was decided to clear the area and rebuild.  So,after several centuries the Cat and Bagpipes fell victim to progress.

Nice read! The Literary Gazette is bound at the library into volumes? I'm just wondering how you read your info. I was expecting microfilm.

Hi Jan, Nice to have you posting again and with such an intriguing article. Loved the images you sourced for the piece, they do help it come to life. Do you specialize in the Georgian period? 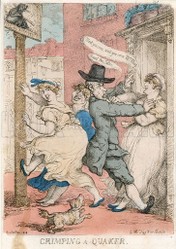