Stand By Me is a classic song that was a hit for Ben E. King and the Drifters and was covered years later by John Lennon

Ben. E. King and The Drifters
Stand By Me is one of the songs I always perform at gigs. It is a classic pop song that just about everyone knows so it is ideal to get people joining in with it. It is a great song for audience participation.
It was first written by Ben E. King, Jerry Leiber and Mike Stoller. It was a hit for Ben E King, who was already famous for his work with The Drifters. In fact it was a number one in 1986 on its re-release, and number four the first time it went out in 1961.

In 1975, it was recorded and released by former Beatle the late John Lennon in a very different version with more of a rock flavour to its original R&B genre. In 1999, it was included in Rolling Stone's list of the 500 Greatest Songs of All Time.

I love the song, and also as a performer, I well know the value of audience participation at gigs. It gets the crowd on your side and helps for a far more interesting and enjoyable experience for all.

I decided to cover Stand By Me in a totally new and unique way. I decided to invite the audience to come and join me on stage - to literally stand by me!

Over the years, I have become known for doing this, and often use it to close my set. It can get really chaotic and in some places the management are not too happy about it but generally I have got away with covering the song how I like to play it.

I will always remember playing it on stage at Glastonbury Festival in 1998 which was one of the very wet and muddy years.  I was on the Wise Crone Stage which is one of the smaller ones and  I had a couple of people join me for Stand By Me. I had an encore for my set too and I am sure my performance of this song got the crowd on my side.

Stand By Me by John Lennon sheet music

John Lennon covered Stand By Me

Bard of Ely at Glastonbury Festival 1998 ( a very wet year)

In a club setting there may be drums and musical instruments already on the stage as the set up for another band appearing at the same venue. This was the case once in the Oddfellows Club in Luton, which I was headlining. It was a benefit concert against the Criminal Justice Act back in the mid 90s.

One of the other acts was a death metal band called Irritant and I ended up with them on stage with me really rocking the song up. At one point I jumped down off the stage to see if I could get some more people up and I left the vocalist of the metal band singing.

Bard of Ely live on stage at Tenerife's Flicks Bar

Stand By Me with audience participation

At another gig in Cardiff's Welsh Club with King Arthur and the Travelling Court of Camelot it became combined with an impromptu knighting session with King Arthur with sword Excalibur in hand down in front of the stage knighting those who came forward.

I changed the lyrics to "Stand by King Arthur and get knighted," and they did! Billy the compère said after we finished: "Well, that was the legendary Steve Andrews with King Arthur and the Travelling Court of Camelot, and I don't know how anyone is going to follow that!"

As a member of the Free Gorsedd of Bards of Caer Abiri, it became a new tradition for me to perform the song in the ancient stone circle where we met for the eight celebrations of the pagan yearly calendar. I often had King Arthur and other archdruids in the circle with me and with people dancing.

That is another change I make to the lyrics. I sing "dance by me" and they do!

All about King Arthur Pendragon

Stand By Me at Flicks bar, Tenerife

Stand by me and don't forget the green beard

It's a good gimmick

Over here in Tenerife, I became well known for performing the song at Flicks Bar in Amarilla Bay in the south of the island. I was equally famous for having a green beard and a lady called Vicky made plastic green beard masks that could be handed out to the bar staff and audience.

I often had a whole bunch of people up on the stage with me, all wearing green beards and singing and clapping along with the song. On one occasion someone even brought a dog up on the stage too.

Bard of Ely and Psychic Dave perform Stand By Me 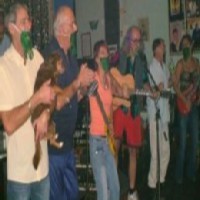 Wizzography for The Bard of Ely whose real name is Steve Andrews. Here you can find out more about him.
14%  0   2 BardofEly
Books

C.J. Stone is an author several books, as well as being a journalist and freelance writer. He is probably most famous for his column Housing Benefit Hill that was in The Guardian.
Loading ...
Error!