Antoine de Saint-Exupery wrote, at the end of The Little Prince, to send word to him if the child returned. Several modern authors have done that. 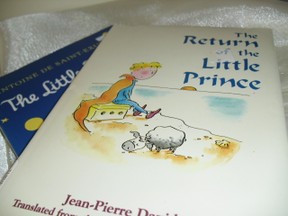 The return of the little prince... or is that the returns of the little prince?  It hasn't reached the level of Elvis sightings, but in the years since The Little Prince came into the public domain in some parts of the world, quite a few authors claim to have seen him.

There are two different books, by two separate authors, that have been translated into English as The Return of the Little Prince.  There is another book, Return of the Young Prince, that is available in the United States as a Kindle book.  There are reports of a fourth story, but it has proven elusive.

The Return of the Little Prince

Of the two books by this title, the better known is probably the one by Ysatis Desaint-Simon.  It is widely available through Amazon.  The following review is for the Jean-Pierre Davidts novella, published in 1997 and translated to English in 1999. I don't think this book in print, at least not in the U.S, but it can be bought used through Amazon and other online sellers. 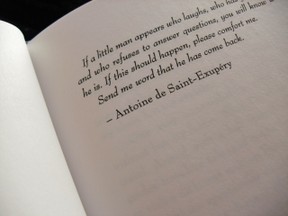 The narrator wrote, at the end of The Little Prince, that if a reader encountered the prince, he should comfort him by sending word that the little fellow had returned. Davidts assumes that it is de Saint-Exupery himself who needs comfort and addresses his incredible tale to him.  Not only does he speak to him, but he has something that must be returned to him at the end.  (It takes some suspension of disbelief to imagine that the box indeed reaches him. and yet... it must.)

Davidts' sequel parallels the original in some ways.  A shipwrecked traveler is approached by a well-dressed little boy who asks a surprising question and shares an even more surprising tale. When a tiger came to his small planet, the prince's sheep was put into jeopardy.  At the warning of his rose, the young prince left on a shooting star in search of a solution to his problem.  He encountered some folks along the path to earth who were not terribly helpful.  One was an ecologist, another a statistician, another an advertiser.  There was also an administrator, and by far the most disturbing, a border patrol person.

Davidts' tale has a wry humor. We are, for example, led to realize that the little prince, with his baobab-eating sheep, was a practitioner of biological pest control.  While this book can't touch the original (What can?) it remains relatively true to the themes and metaphors in The Little Prince. Davidts, too, has an eye for the absurdity around him.  His advertiser contemplates tigers as "a new niche that hasn't been exploited."

What's the age group for this story?  Like the original, it's hard to pin down; this book could be enjoyed by adults or older kids. The vocabulary would be a bit much for the younger ones. Here's an example: "At his side was a sheep placidly chewing a palm frond, its eyes filled with the vacuity which renders those of its race impervious to the torments of the world around them."

The Return of the Little Prince (Jean-Pierre Davidts version)

This is the one featured in the review.

The Return of the Little Prince (Ysatis DeSaint Simon version)

I haven't read this one!

The Return of the Young Prince

This is a Little Prince sequel that I just found out about: The Return of the Young Prince.  It was written by an Argentine author, and as far as I know, is only available in English on Kindle.  I read the first couple chapters (available online as a preview).  I did want to read more, and after poking around a bit, learned that it was indeed possible to read a Kindle book on a PC (with a software download available free from Amazon).  I haven't done it yet, though!

In this tale, the price has grown from a child to a youth, but he retains his childlike innocence. The new narrator is driving down a road in Argentina when he encounters the young man sleeping near the road, placid and exhausted. The narrator feels the need to pull him in and take him to safety. The youth is just as bewildering in conversation as he was in sleep. I get the sense, from the Amazon review, that a long philosophical discussion will ensue.

On Amazon: The Return of the Young Prince

Has The Little Prince Returned?

Someone tells you he's returned. Your first inclination is to...

I read on Wikipedia that there were three sequels.  The Davidts' title was given as The Little Prince Returns not The Return of the Little Prince.  The Return of the Young Prince had no mention. There was reference to another story, The New Adventures of the Little Prince, which purportedly described the search for a new flower to replace the one that (ah!) did get eaten by a rose.  Well, de Saint-Exupery did leave us with the possibility (and the fear) that this could happen.  And, yes, it can be cathartic to explore our own fears through metaphor and story.  But I for one feel the need to say, "Ah, that is just exploration.  Not a sighting!"

Now here's the odd thing:  When I searched by title and the name of one of the authors, I came up with pages of mostly word-for-word rehashing of what was on Wikipedia.  I did not find the story; I found little evidence of its existence.  I have gotten the impression that it might be some type of media other than a book.

(There are, I will add, plenty of fan fiction sequels that are not for sale.)

Your Thoughts? (Have you seen him? Do you believe?)

The Little Prince is one of my favorites. I know a boy who once played him on stage. I am anxiously waiting for his return, too.

I honestly didn't know anything about the Little Prince till today. It's an interesting read. 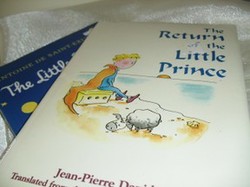