Steven Seagal is maybe not back in shape, but he sure is back in form in ”Absolution.” And not only that – he’s actually in this movie, meaning he’s starring in it, he’s playing the lead, and he’s featured in it from beginning to end. This is a real Steven Seagal actioner, and it’s pretty good – it’s above average when it comes to Seagal’s direct-to-DVD B-movies.

I don’t know if Keoni Waxman is Steven Seagal’s preferred director, or if Seagal is Waxman’s preferred actor, but this is yet another outing from the Hawaiian director. He’s made quite a few Seagal movies by now, and several more are in post-production or filming. Waxman has made a couple of Seagal’s best movies, such as ”A Dangerous Man,” but also a few that aren’t very good – like ”A Good Man.”

Like so many of Steven Seagal’s movies, ”Absolution” (also known as ”Mercenary: Absolution,” and even ”The Mercenary: Absolution”) was shot in Bucharest, Romania. Seagal plays John Alexander, who’s some kind of contract killer and who in the opening voice over says he’s made a lot of bad things. Alexander is hired by some agency to take out a gangster, but while doing so, Alexander and his partner Chi (Byron Mann from ”A Dangerous Man”), encounter a young woman running for her life.

It turns out that the girl and her sister were kidnapped by a psychopathic mob boss (Vinnie Jones), who likes to film himself torturing women. Before escaping, the woman managed to steal a video tape of the psycho. Alexander and Chi decide to find and kill the mob boss, his men, and, well, anyone getting in the duo’s way. They also pop by a strip joint a couple of times.

If it’s summer, warm, and you need to keep a window open, and if you, like I do, live next to a heavily trafficked street, it’s pretty tough to watch a Steven Seagal movie without subtitles. As always, Seagal is whispering and mumbling his lines, and it’s pretty damn hard to hear what the hell he’s saying. Not that it matters, it’s pretty obvious what he’s saying. And as usual Seagal rarely looks at the persons he’s talking to.

There’s quite a lot of action in this movie, and it’s brutal and gory. The bad guys can’t shoot straight. The big-bellied Seagal is basically a sitting duck; an easy target who’s moves slowly. The bad guys also often give Seagal a chance to kill them, instead of just gunning him down. This means that Seagal gets the opportunity to break every bone in the baddies’ bodies, or plunge a knife in their throat, or just shoot them in the face.

Byron Mann’s character is just as sadistic as Seagal. In one scene, he tortures a guy by pouring boiling water from a tea pot in his face. Mann is a good martial artist, unlike Seagal, he doesn’t need a stand-in when kicking people – and he kicks a lot of people in this movie. He takes a bullet in his shoulder, but that doesn’t stop him from kung fu-ing dozens of people.

The last scene needs to be seen to be believed. The young woman Seagal rescued is seducing him by slowly dancing in front of him (he could be her father or grandfather) – and on the wall behind her is a big oil painting of Steven Seagal playing the guitar!

”Absolution” is no new ”A Dangerous Man” or ”Urban Justice,” but it’s worth a look. 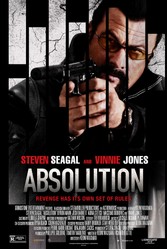