A review of an action movie starring Steven Seagal as a vigilante.

When you watch a Steven Seagal movie, you never know if the Tall Guy actually plays the lead, or if he just appears in a glorified, extended cameo – or a Blink and you miss him cameo. You can never tell from the DVD sleeves. If Seagal is in a movie, he’s featured on the artwork. He’s the only person featured on the artwork for writer-director Michael Winnick’s ”Code of Honor” – but he’s just playing a supporting role.

Steven Seagal is Colonel Robert Sikes, who’s wife and kid were killed in a drive-by shooting. Because of this, Sikes has decided to take out the trash in Salt Lake City (where this movie was shot). Using a sniper rifle and bombs, he kills every criminal he can find, from pimps and muggers, to mobsters and corrupt politicians. Yes – Steven Seagal is The Punisher. Sort of.

Sikes is referred to as the Super Vigilante. Louis Mandylor (Costas brother) plays the cop trying to find Sikes, who’s blown a strip joint to pieces, killing everybody inside. Craig Sheffer (”Nightbreed”) is agent William Porter, who seems to know who the Super Vigilante is. James Russo has a small part as a gangster.

The idea behind this movie is ”How far can a vigilante go before people stop cheering.” At least according to an interview with Michael Winnick. The first few minutes of the movie are pretty good. Seagal is hiding on a roof top and takes out a large amount of bad guys. There’s a big explosion and the title – ”Code of Honor” – appears. It feels like a good, old-fashioned action movie.

Too bad this movie turns put to be some kind of amateur hour. The editing is pretty god, but otherwise, this is a very cheap looking movie. The cinematography is flat and looks too digital. The dialogue is bad and most of the actors are really bad. The worst one being the guy playing an unscrupulous TV reporter in a handful of scenes which seem to be inspired by the great film, ”Nightcrawler.” That’s a very annoying and silly character.

Swedish actress Helena Mattsson plays a stripper, who’s the female lead, and she’s by far the best actor in this movie.

The use of CGI gore and CGI muzzle flares in this movie is abusive. Some of the action scenes could be good, if it weren’t for the massive amount of dopey bullet hits, which makes it look like a video game.

I don’t know if Steven Seagal has bought himself a new hair piece lately, but his rug looks more like some kind of hat than ever. He actually kind of looks like The Phantom; the comic strip character. Albeit fat. And with a goatee.

Seagal doesn’t have that many scenes in ”Code of Honor.” I guess he only spent a couple of days on the set. In most of his scenes, he’s just sitting down with his rifle. However, he does have a decent fight scene on a roof top near the end.

”Code of Honor” actually played a handful of theaters in the States for a couple of days, before being released on VOD and DVD. Theatrical screenings of movies like this one are usually just promotion for the home video release. 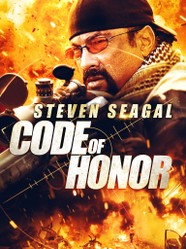