A review of a Steven Seagal movie that's hardly featuring Seagal at all.

”Gutshot Straight,” directed by Justin Steele, is one of the best looking movies Steven Seagal has appeared in for ages. Too bad he’s hardly in it at all.
Seagal, sporting a hula shirt and smoking a cigar, shows up already in the pre-credit scene. He’s sitting at a desk, talking. He appears three more times in the movie, about three minutes all in all, and except for in the final scene, he’s sitting at that desk.

Seagal’s face dominates the poster for ”Gutshot Straight,” and his name is featured on it. However, he isn’t mentioned at all in the James Bond-esque opening titles. I had to rewind and re-watch the titles – I didn’t know anything at all about this movie, and did of course think this was a Steven Seagal actioner. Vinnie Jones is also featured on the poster, and he participates just as little as Seagal.

This turns out to be a glossy neo noir thriller of the kind that flooded the home video market in the late 1990s/early 2000s. George Eads, from ”CSI,” plays down on his luck gambler Jack Daniel, who lives in Las Vegas, drives an old Volvo 240, and owes people money. Stephen Lang is Duffy; a mysterious, rich guy who makes Jack an offer. offers Jack will get a lot of cash if he has sex with Duffy’s wife … while Duffy is watching. But things aren’t as simple as that, and things aren’t what they look like.

The cinematography is very slick, the locations are flashy, and the acting is most of the time pretty good. However, the name actors are wasted in this movie. Ted Levine has a small part as a baddie, and suddenly Tia Carrere shows up in a totally pointless part as a woman who asks Jack for a drink. Was she just passing by? ”Hey, are you making a movie? Can I be in it?”

I lost interest rather soon. ”Gutshot Straight” is not thrilling, not exciting, not fun. It’s just an uninspired, boring movie. And if you’re looking for hard hitting action, look elsewhere. Seagal shows up at the end and fires one shot. That’s about it. Oh, and Seagal’s character is called Paulie Trunk. Not the coolest name one can think of. Trunk? As in boot?

But I wish all of Steven Seagal’s movies looked this good – which they usually don’t.

This movies was released as ”Gutshot” in some countries. 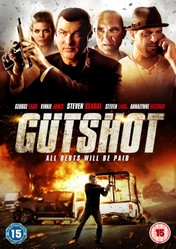 A review of the 1961 movie about a cat seeking revenge for the murder of her mistress.
62%  1   9 StevenHelmer
Thrillers