Dory Previn was an American singer-songwriter probably best known for her album Mythical Kings and Iguanas.

How the Pulp frontman became a fan of Dory Previn

It is one of those injustices in the world that Dory Previn never became a household name and that many have not heard of her or listened to her remarkable body of work. Nevertheless she was very highly acclaimed by all those who did know her songs and she has many well-respected fans in the music business.

Jarvis Cocker, the singer-songwriter himself and frontman for Pulp, became an instant fan just like I did it is reported. Apparently he heard her Lady With The Braid on the radio and that was enough to make him want to hear a lot more.

According to Bob Stanley, writing forThe Sunday Times in January 2008, Cocker had been asked to choose songs for Desert Island Discs, and had said, referring to Dory Previn's Lady With The Braid : “I remember very vividly first hearing this record. I had moved to London. I was living in this squat and I was trying to put a curtain rail up. I was listening to the radio and it’s one of those moments where you have to stop what you’re doing and pay full attention.”

Dory Previn had been very successful writing songs and music for films in the sixties in collaboration with her famous husband André Previn the classical music conductor. The couple had married in 1959.

They wrote five songs for the successful movie Valley of the Dollsand other songs were covered by singers including Frank Sinatra who recorded You're Gonna Hear From Me. So despite the fact that many people know nothing about Dory Previn she had already established herself as a major talent before she went into song-writing for herself rather than for films and other people.

Although successful as a songwriter Dory Previn's personal life was a disaster. having a phobia of flying she didn't accompany her husband on his world tours and by 1965 she had suffered a nervous breakdown and had gone into a mental hospital.

Eventually André Previn and Dory divorced in 1970 after she found out that he had had an affair with actress MIa Farrow who was pregnant by him. Upset by her husband's betrayal and infidelity Dory Previn became very ill again and ended up receiving psychiatric care in a hospital again, including ECT electro-shock treatment.

Dory Previn's hardships in life and terrible experiences make up a lot of the autobiographical content of her songs. In 1970 she signed with Mediarts and her solo album On My Way To Where was released.

It was followed in 1971 by Mythical Kings and Iguanas, and in 1972 after United Artists had taken over Mediarts, Dory Previn's third solo album in that period was released to much critical acclaim, and entitled Reflections in a Mud Puddle.

Dory Previn - The Lady With The Braid

The confessional and autobiographical nature of Dory Previn's songs is definitely a strong part of their appeal but so too are the arrangements and production. Dory Previn has song-crafting down to a very fine art.

Probably for me though, just like what causes my love of many other songwriters' work, it was the lyrics that hooked me.

Mythical Kings and Iguanas is about struggling to escape from the real world by diving into fantasies and mysticism. Dory tells us "Astral walks I tried to take, I sit and throw I-ching,aesthetic bards and tarot cards are the chords to which I cling."

But at the same time she knows that she "never learned to touch for real or feel the things iguanas feel, down, down, down where they play." This is something that makes so much sense to me and why I often consider animals as having saner and more balanced lives than humans. Animals live in the real world and do what they were designed to do and it is a pity so many of us cannot do likewise!

Other songs deal with worries about getting and keeping a relationship and she sings of the "Lemon Haired Ladies" and their seductive power that she is worried she no longer has:

In The Game she battles with the unfairness of life and how it appears that the cards are stacked against you and everything is fixed:

Dory Previn was born in New Jersey in 1925 but sadly died, aged 86, on February 14, 2012. Despite her age she had carried on working over the past decade, and despite having suffered a number of strokes.

In 2002 a royalty-free recording by Dory Previn was made available via the Internet with the title Planet Blue. It is a selection of her recent and previously unreleased songs and subject matter ranging from environmental degradation to the threat of nuclear disaster is covered.

Dory Previn had married again in 1984 when she wed actor Joby Baker, and her second marriage had been a successful one. She lived in Massachusetts with her husband.

A compilation of Dory's early 1970s work, bearing the title The Art of Dory Previn, was released by the EMI label on January 21, 2008.

Dory Previn led a remarkable life with many high points and lows. She has shared it all with us in her long catalogue of songs.

Thanks for posting! Dory was an amazing singer-songwriter and will be remembered for her very great talents.

I had never heard of her. Such a sad life.

Thanks for reading and posting!

An interesting article. Thank you!

Singer-songwriters often do a lot more than singing and songwr...

Singer-songwriters are famous for singing and songwriting but they often have... 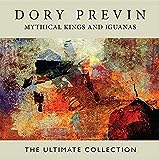 Singer-songwriters often do a lot more than singing and songwriting

Singer-songwriters are famous for singing and songwriting but they often have many other artistic talents such as acting, writing books or being DJs.
14%  0   2 BardofEly
Solo Singers