Tropical fish keeping as a hobby can teach some amazing facts about our finny friends that are almost unbelievable but true.

I used to keep tropical fish at various points in my life and was often very successful at breeding many species. I learned a lot about life in general from watching and looking after fish and some of what I found out would probably surprise you.
I remember one incident when I was a young boy of around the age of 10 and I had several tanks in my bedroom. My mother used to get annoyed with me for dripping water all over the place when I was cleaning them out and also because instead of going to bed and getting a good night's sleep often I would stay up watching my fish.
Sometimes this was very important to me because I was waiting for a pair to spawn and many species eat their eggs or babies unless you can get them out quick enough.

Sounds fishy but it's true

True story of an Upside Down Catfish 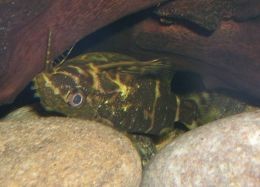 But I digress, the incident I want to share with you is nothing to do with staying up late or breeding tropical fish, but rather it has to do with having faith and also with the miraculous powers of healing that all forms of life have.

I had a large Upside Down Catfish (Synodontis species) that used to spend most of its time hanging about in the corners of the tank. It was terribly greedy though and would stuff food of any type - flake food or live food such as earthworms or tubifex until it had a noticeable bulge in its tummy, and still it would be searching around frantically looking for more.

One day something startled it and it dived down quickly and unfortunately dashed itself into a rock cutting its belly open. All of its innards came out through the hole. You could see the stringy intestines hanging outside it.

I was really upset that this had happened and my Auntie Elsie, who was staying with the family at the time, said she was sure the poor fish would die and it would be a good idea to put it out of its misery.

I didn't agree because I just couldn't bear to kill my pet and I had faith it could get better. It didn't look good though because the catfish went right off its food and lost its normal terrific appetite. It was doing even less than normal in the way of swimming about too. In fact, all the poor fish did now was stay in the corner with its head hanging down.

My aunt kept saying how you could see it was dying but I wouldn't believe her. As the days passed I started to notice something amazing happening. The catfish was absorbing its spilled inner organs back into its belly. Eventually all the intestines that had come out like a human hernia had been somehow pulled back in, and although the fish had lost weight drastically and its normal dark colouring it was clear that it was healing. After about a week the gap in the stomach had closed over and the fish started to swim about and to eat again.

I was so happy that my Upside Down Catfish was going to be OK, and indeed it was. It regained all its greedy appetite for food and I gave it plenty and very soon it was back to normal although it bore a scar in its skin for the rest of its life.

A cichlid suffers from grief

Many years after that, at some point in the nineties, I had a large tropical fish tank in my kitchen in my house in Ely and among the fish I had in it were a pair of some species of mouthbreeder cichlid. What the species was I don't know and neither did the shop I got them from.

Amongst the cichlids, which are a very large group of fish species, there are many types that choose mates they stay faithful too. In other words they are monogamous and mate for life and such species have a strong sense of pair-bonding.

There are many types of cichlid, which use the mouthbrooding method of rearing their fry. This means that the female gathers up the fertilised eggs into her mouth and keeps them there until they hatch. After they are free swimming they can dart back into their mother's mouth for safety. While she is incubating the eggs the mother fish does not eat at all because it would not be safe for her eggs for her to do so.

The type of mouthbreeding cichlid I had were obviously one of the species that mates for life and I saw an example of how a fish can feel emotion because the female of my pair of fish died and after that the male went downhill fast. In this species it is normal behaviour for the male to dig a pit in the sand and in this the female would lay her eggs. This type of cichlid and many other varieties spend a lot of time shifting the gravel about in tanks and because of this are not good to keep if you want an attractive underwater garden.

After my male lost his wife he stopped digging pits in the gravel because he knew he had no mate to do this for any more. He also went off his food and began to conspicuously mope about and just stayed motionless in a corner of the aquarium showing no interest in anything. I knew what I was looking at was a case of extreme depression in a fish who was dying from a broken heart.

There was nothing I could do about it and resigned myself to having to sadly see him pine away. At this point, however, my friends Pixi and Sioned called around to see me. Sioned went in the kitchen and looking inside my tank asked me what was the matter with my big fish. I explained that his wife had died and I thought he would die too now because he was very depressed and had stopped eating.

Sioned, unlike me, was not prepared to give up on the fish and she started tapping on the glass side and talking to him through it. She came to call the next day too and the day after and each time she spent ages in front of the tank trying to get the old fish's attention by tapping the glass and talking to him.

Amazingly this worked and the male cichlid started swimming about again and eating. I could see that his recovery was definitely down to the nursing my friend Sioned had given the fish. She had been giving him the love and attention he needed and he got well again.

Both of these two incidents taught me two invaluable lessons: firstly that whilst there is life there is hope and that Mother Nature can accomplish miraclulous healings, and secondly that fish can have emotions that affect them just as much as human emotions can affect us.

Choosing a Betta Fish for Your Apartment

Bettas make perfect pets for small spaces, such as dorm rooms, classrooms, an...

Pest Snails in the Aquarium

For some people, pest snails are one of the most frustrating fish problems. P... 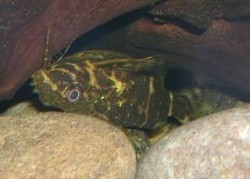 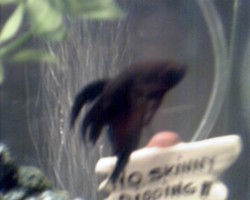 Choosing a Betta Fish for Your Apartment 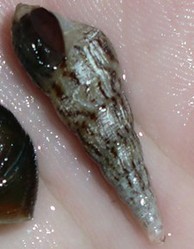 Pest Snails in the Aquarium

For some people, pest snails are one of the most frustrating fish problems. Pest snails multiply quickly, which can make it hard to see your fish through the glass.
Loading ...
Error!