Mick Magic became well known for running the Music and Elsewhere tape label in the 1990s and promoting the work of countless underground and unsigned bands.

Please introduce yourself to my Wizzley readers.

MM: An underground legend that will be remembered long after he is forgotten - Mick Magic, the man behind Magic Moments At Twilight Time. I also ran the Music & Elsewhere label, from which grew the wider United World Underground project, from 1987 till its 'sabbatical' circa 2001.

The underground legend as he was

What was Music & Elsewhere and United World Underground all about?

MM: At the beginning, it was really a case of practicality; if a band is only selling its own output, it's very limiting. If, on the other hand, various bands sell each other's output, it's much easier to attract more support and interest. Of course, if something works, it tends to grow, so it all became a lot more than that ultimately.

Over the years M&E released 600 albums, it's phenomenal the amount of great music (and elsewhere) out there. The sad thing is that a lot of it would have remained mostly obscure and unheard if it hadn't been for the underground set up.

Nowadays they have the Internet, so communication isn't a major problem, but through the heyday of that global underground movement, it was all jiffy bags, stamps and customs forms. The level of communication we all take for granted now simply wouldn't have been possible then without the subterranean networking we were a part of.

One band once wrote me "If you're not on M&E, you're nothing." Whilst I don't agree with that statement (there were hundreds of excellent labels out there!), it was flattering. However, what it REALLY meant to me was the value of that global network, because it wasn't the fact that band was on M&E that made them something, it was the fact it connected them with the wider underground. I know it’s a cliché, but ‘united we stand’ and all that jazz.

What were its greatest achievements would you say?

MM: I think its greatest achievements were probably all of the small achievements! Every new friend we helped make for every participant was an achievement in its own right.

Musically, we gave an audience to some artists that would probably have been overlooked otherwise. Yeah, I think that's it, not so much that M&E/UWU achieved anything in itself, rather it helped created opportunities for others to achieve, which I feel is a much more valid experience.

Please say a bit about personal involvement in underground music?

MM: Warning - it'll take over your life!!! Seriously, the first few connections we made, I was just thinking "Wow, we should be able to sell a few more MMATT tapes now!" But then it grew and grew and I came to see a much greater importance than simply further distribution of one's own creative output, I began to recognise it as an incredible social phenomenon.

We were thousands without a voice, but this 'system' gave us one. I honestly had no idea that so many people in so many different countries thought, at least in significant part, the way I did. It was that sudden joy of being no longer alone, and knowing that so many other people were discovering that too.

People may take the Internet for granted these days, but the full significance of our underground network at that time was huge. It broadened my outlook in so many ways. I mean, I got to know a lot of foreigners, which really helped get that 'little Britain' parochialism out of my system.

I learnt to work together with people from all different backgrounds based on what we had in common, rather than the conventional world view of bickering with other nations over how we differ. Intoxicating stuff, it truly was. I’m not sure its full significance has been understood yet, but I think it will be.

Sadly, come 2001, 15 years of running it all, plus making a living, plus trying to have some semblance of a private life, all rather took its toll, both timewise and financially, so I had to let it go for a while.

Thankfully, new technology presents us with opportunities to remember what we achieved and see if we can't build something anew for the modern era.

What do you think has gone wrong with the music scene today?

MM: You really need to ask!? Groan. I get so tired of manufactured pap (not a misprint)! I know there's always been an element of it in music, but doesn't it seem to have got worse and much more cynical? Make the music you WANT to make! And walk around with your head held high and your pockets empty…

Any projects for the future?

Oh yes, I'm back and re-inspired! I have really missed all the contact and interactivity over the last few years, but truth be told, I was in a rather dark place for a lot of it, the joys of being a depressive.

Though, funnily enough, it was all those depressive things, feelings of not belonging et al, that inspired the whole Magic Moments adventure in the first place. The 'not belonging' bit is something I've found common amongst adopted people, as for the depression... just lucky, I guess!

Actually, in the Summer of 2008, I was lucky, seriously lucky, and that's what re-inspired me. People keep asking what drew me back, so here goes.

It followed a change in UK law some 3-4 years ago that allowed birth mothers the right to trace children they’d had adopted. You can see where this is going, can’t you? BANG!

Talk about life-changing moments. All those questions: Why am I like I am? Why do I look like this? Why do I think this way? Which planet am I from? Suddenly, the answers came flooding.

My birth mother is a lovely lady, we see each other quite regularly now, which has been great. Her whole life has been in the performing arts, first as an actress and dancer (musical too, naturally), nowadays as director of an organisation dedicated to raising the standard of performing arts tuition.

The strangest part to get used to was that she had another son; after 50 years as an only child, I had a brother! It didn’t end there, she was still in touch with my father too. He’s Anglo-Irish and has lived in Spain for some years now, where he had worked as an investigative journalist. Of late, semi-retired but more active than ever, he’s turned to writing books, factual material, mostly crime, some military as well. The bizarre thing was seeing his photo on one of the sleeves, first time I’d ever seen a picture of someone that looked like me.

Apparently, I have more siblings on his side too, but one thing at a time, eh? As you can probably imagine, it had a bit of an impact on my life. So, just when you thought it was safe to go back to the hi-fi…

Anything else you would like to add or promote?

AFC Wimbledon to the Football League!

I am glad you liked it! 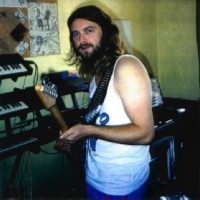 Wizzography for The Bard of Ely whose real name is Steve Andrews. Here you can find out more about him.
20%  2   2 BardofEly
Pop Stars