Where is the Harry Potter Castle?

The question 'Where is the Harry Potter Castle?' is not an easy one to answer. Hogwarts School of Witchcraft and Wizardry scenes were actually filmed in several locations.

'Where is the Harry Potter Castle?' is a question a lot of fans ask, either because they want to visit Hogwarts School of Witchcraft and Wizardry during their next vacation or because they 'just want to know'. In this article I will cover everything that there is to this topic, from a map to the locations to a detailed list of where which parts of the Harry Potter Castle were filmed and everything in between. Grab a mug of hot Butterbeer and enjoy ;-)

How and Where the Harry Potter Movies were Filmed

Hogwarts Location in the Books and Movies

The books and movies are rather vague as to where Hogwarts Castle is actually located, but in 'Harry Potter and The Prisoner of Azkaban' it is mentioned that the Scottish town Dufftown is not far from Hogwarts.

Also the travel time of the Hogwarts express, that brings the students from London to the railway station in Hogsmeade, is another indication that Harry's Castle is far up north. The train departs from London's King's Cross station at 11:00 and arrives after nightfall in Hogsmeade. Bearing in mind that it is daylight until around 20:00 in September, when the school year starts, this gives us a minimum travel time of around 9 hours.

And last, but not least, J.K. Rowlings has stated herself, in an interview she gave back in 2000:

"Hogwarts ... Logically it had to be set in a secluded place,

and pretty soon I settled on Scotland in my mind."

And after we have that bit out of the way, here the

Map of Hogwarts by a Fan

The people behind Harry Potter avoided intentionally to use only one location as Hogwarts Castle. This way they wanted to avoid the impression, that there is one real castle, that can be visited and wanted to uphold the illusion that it exists, but is hidden from 'ordinary muggle eyes' ;-) Now to the locations and places where Harry Potter was filmed and what was filmed where:

Opening scenes and aerial view of the castle: These were based on computer renders, using different sources and inspirations. If you look at the image on the right, you see that one of the inspirations was, most certainly, the 'Church of Our Lady of the Tyn' in Prague (Czech Republic). Just look at those spires! Have also a look at the official trailer below the photo and you see what I mean.

Outside and Quidditch grounds of the first two films: Filmed mainly at Alnwick Castle (Northumberland, Great Britain). This castle in the north of England has served since many years as a film location, not only for two of the Harry Potter movies, but also for the filming of 'Blackadder' and 'Robin Hood'. It is also nicknamed as 'Windsor of the North'.

After of Alnwick Castle, the next important filming location was Oxford. The 'Duke Humfrey’s Library', part of the 'Bodleian Library' became the library of Hogwarts, the 'Divinity School' became the hospital wing and Christ Church College was used for the 'Great Hall', the staircase to the great hall, some of the cloister scenes and the room of trophies.

The room where Prof. Quirrel taught was also filmed in the abbey of Lacock, as was the one of Prof. McGonagall.

The classroom of Prof. Fliwick was filmed in the School in Harrow.

Obviously some of the Hogwarts scenes have been filmed in a studio and don't have any 'real' location at all.

As for Harry Potter Castles in themeparks, there will be soon two!

The original one is called 'The Wizarding World of Harry Potter', is in Orlando, Florida and was opened in June 2010. It main attraction is ' Harry Potter and the Forbidden Journey' which includes a recreation of Hogwarts Castle

The second one, of the same name, which is planned to open somewhen before 2016, is currently under construction in Universal City, California.

'Where is the Harry Potter Castle?' is a question that has many answers, perhaps the best one is – in our imagination and dreams ;-)

Do You like to write? Do You want to earn money with Your writing? 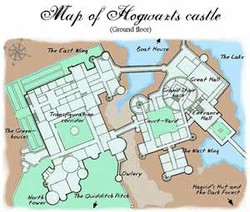