Who Are My People?

I’ve done just enough genealogy to raise more questions than find answers about my heritage. I’m not sure why I have to know where my family came from.

I have been to several Native American Pow Wows in the past. I love looking at the crafts and listening to the speakers and watching the dances. Recently, I was watching a film about a Native American gathering. The speaker talked about how they wanted to preserve their culture and language, how important that was to them. It moved me in a way that is hard to describe.
It got me thinking about how I would like to go to a gathering of my people. But just who are my people? There are two families I’m related to who had family reunions. One family I don’t know at all and the other one stopped having reunions years ago. I hardly ever even get to see my immediate family.

The other question is, how far back do I go?  The whole history of the United States is a very short period of time in the overall scheme of things. Since I’m not Native American, I thought I would look back beyond my ancestors coming to this country. My father’s family came over from England in the 1600s. We have documented right up to the first Pettey in Virginia. There are records of Petteys in England but we don’t have documentation that we are in fact related to them. We don't really know exactly what part of England they came from.

I haven’t heard of any English gatherings. In fact, I think people would really think me odd if I tried to act British. I already speak English, at least my version of it, so that’s not a problem. I could be wrong, but the English don’t seem at first glance, to be in danger of losing either their culture or their language.

Guide to the British Another side of the family, we recently discovered, had another beginning. My great grandmother’s father was born in Dublin, Ireland. Experts* have pointed out that with a name of Welch, he most likely had ancestors who immigrated from Wales.

Now I have something to grab on to. The only thing is, I’ve never seen either an Irish or a Welsh gathering around here either. I could maybe learn to speak Welch, but I can’t even begin to pronounce it, and who would I speak to? At least I can read up on history and customs of those regions.

Wales Has Sheep Too! 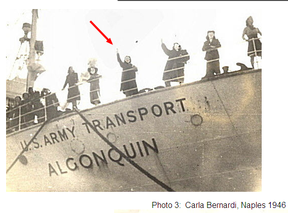 My mother’s side of the family is easier in some ways. My mother was born in Verona, Italy and married my father during WWII. She came over on a ship carrying pregnant war brides. Yep, that’s me in that picture. You can only see Mom because I was not quite born yet.

My mother’s family had moved to Rome but originally came from the Veneto region of Northern Italy. There is a lot of heritage there. I have found out some fascinating information about the old culture and the Goddess Raitia. There’s a dialect that is distinct and plenty of family still there. The only problem with trying to research is, everything is in Italian. I’ve tried to look things up and all the good stuff is not in English.

Then I had a revelation. I’ve always loved Scotland and even thought about moving there. There’s a country with great music, lots of sheep and Border collies. I had just never found any link of our family to Scotland. Then I remembered my dad saying something as he was showing me his official MacDonald kilt. He had joined a bagpipe band. (yes, he played the pipes) and had permission to wear the MacDonald kilt as the Petteys were considered a sept of the MacDonald clan. I was stunned. This means I can go to the Highland Games and hold my head up as a Pettey.

Comments from all my brothers and sisters.

Thank you That picture was taken many years ago at the Pettey reunion in Nacogdoches. It's of my grandfather's brothers and sisters.

I love the feature image of this story, each time I see it on the front page it gives me a warm feeling. There is nothing like family and our historical roots. :)K

Thanks, Mira. I do appreciate it.

Really enjoyed your article, Lana, and some of the books you're showcasing should be really great, too :-)

Thank you. It's nice to know your roots. Sometimes it explains a lot.

My son and I have done extensive research on the family. Until recently, the only thing I knew was the Native Americans on my father's side of the family. Then I found out the rest of my ancestors came from England. Nice article.

Hello Sis to you too! I do take a convoluted path sometimes but as someone said, how do you know where you are if you don't know where you've been.

Searching one's heritage certainly is interesting. Sometimes I feel as if there's a string connecting us from deep inside to all of those from whom we've descended and into the future to those who will continue after we're gone. I believe, as you do, that we are, in the final analysis, connected to everyone.
Hi Sis!

It is an adventure. I just didn't know where this was going to lead me.

Thanks. I probably spend too much time thinking about it. But I am curious.