Wreckless Eric is a singer-songwriter who came to fame in the New Wave and Punk Rock era in the mid-1970s when he was part of the Stiff tour.

Wreckless Eric is one of my favourite singer-songwriters
Wreckless Eric’s real name is Eric Goulden, and perhaps you’ve not heard of him but I can assure you this man is a living legend and an icon of the Punk Rock and New Wave music scene. He is also living proof that if you keep on trying you can get what you want. And that a hit song doesn’t have to mean a great deal of musical skill or knowledge - Eric’s most famous song is a two-chord number!

How I discovered Wreckless Eric

The story starts for me back in 1977 when I was living in a bedsitter with my girlfriend and first heard his debut single Whole Wide World on Radio One, very possibly on the late great John Peel’s show. Anyway, I was so impressed on first listening that I rushed out and bought the record on vinyl and played it over and over on our battered old turntable record player.

I was already hooked by the energy and D-I-Y ethics of the punk movement and I loved the in-your-face image and look. The political statement Punk Rock was making resonated with how I was feeling at the time, and then there was Wreckless Eric!

Wreckless Eric’s song was none of the sneering anger of the Sex Pistols or The Clash nor any of American influenced but on-a-budget decadent artiness of some of the New Wave acts – Whole Wide World was just a simple story of a young man who believed that somewhere out there in the world he could find his true love and that despite whatever trials and tribulations slung at him, somehow he would find her. It was a love quest song sung in a very British and very working class way. It was no rant against the system, as many of Eric’s contemporaries were making, it was no call to anarchy – it was simply a young man looking for love and singing his song and I loved it!

The best of Wreckless Eric

The B-side, Semaphore Signals, was of the same class. It told of a forbidden love, a love that was not approved by the girl’s parents who lived “down there in the green belt,” and who didn’t like Eric at all. It was something I could well relate to as nearly all the parents of the girlfriends I had had all hated me too and did what they could to stop their daughters seeing me.

I read an interview somewhere about the new Stiff label and how Eric had got signed to it. It was something like him giving a tape of some of his songs he’d thrown together to Stiff and saying please give us a deal, and somehow he’d been lucky and they had. It was an inspiring story of success.

Wreckless Eric’s label-mates at the time were Elvis Costello, Ian Dury and Nick Lowe and they were all touring the UK as a “Bunch of Stiffs.” I remember seeing them all at Cardiff’s Top Rank “Implosion New Wave night.” All the top Punk and New Wave acts played there on Tuesdays and I also remember seeing, The Stranglers, the Boomtown Rats, The Jam, The Clash, The Flaming Groovies, Patti Smith, Generation X and many more at the venue.

I had got really into the music that was happening then because the hippy Progressive Rock scene had become far too much “us and them” for me – it was all too much the “rock gods” like Emerson Lake and Palmer with loads of stage gear and expensive instruments showing off complicated pieces on a big stage and a high price on admission to their concerts. Punk was the backlash to all this and I loved it but although I went to all the gigs I never got rid of my long hair and full beard, although I did stick some safety pins, paper clips and badges on my clothes as a token gesture.

On the subject of badges, I remember the Stiff tour was dishing out promotional ones with slogans on like “I’m drinking with Wreckless Eric” and “I’m here with Nick Lowe.”

The years moved onward and I had become a singer-songwriter and recording artist myself and have had to list my influences and musical heroes and Wreckless Eric is always included. He is to my mind a great songwriter and although you may not have heard of him until now, I can inform you that Whole Wide World has become a classic of the era it was recorded in and covered by many other acts such as The Proclaimers and The Monkees. According to Wikipedia it was “included in Mojo magazine’s list of the best punk rock singles of all time,” and I am really not at all surprised.

At the end of 2004, I moved to Tenerife and the year after I met a musician at a local bar who was calling himself Alan the Harp. Alan plays blues harmonica, guitar and is an excellent singer-songwriter and we became good friends. We got chatting about all sorts of stuff and it turned out that Alan actually knows Wreckless Eric. Things like this mean a lot to me – I can see life as being about establishing connections and like a massive cosmic jigsaw. Joining the pieces together is what it’s all about perhaps? But I digress.

The latest news of Wreckless Eric is that he did indeed find his true love eventually and is now happily married to American singer and songwriter Amy Rigby. The two of them live in France and have jointly written and recorded an album together called simply Wreckless Eric and Amy Rigby.

It is very different to Eric’s early and later work but nevertheless has his distinctive stamp and sense of humour on it blended and balanced by Amy’s singing and playing. Together they make a wonderful song-writing team and a modern tale of love and romance. 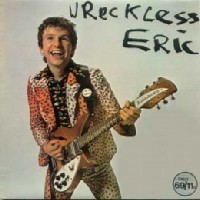 Marc Bolan was famous for fronting the glam-rock band T Rex and for being the singer-songwriter for Tyrannosaurus Tex the act that became T Rex. Unicorn was one of his best albums.
26%  2   3 BardofEly
Bands