Although the village of Aguamansa in the north of Teneife doesn't really get many tourists it is a very interesting place with cloud forests and a trout farm.

A wonderland hidden by clouds
Every cloud has a silver lining they say but the ones in Tenerife have incredible forests in them too, at least where they come down around the mountains they do.
I got the bus to Aguamansa recently and was very glad I did. It is in the La Orotava valley going on up towards Mt. Teide and usually covered in cloud but the place is a pure joy to anyone who loves wildlife. It is a great place to visit if you are one of the many people who enjoy exploring Tenerife by bus.

Where to find out more info about Tenerife

Clouds over the forest

Within a few minutes at the roadside I was discovering all manner of wild flowers that would also be at home in the UK. I found Scarlet Pimpernel, a once common weed in Britain but now endangered, Field Poppy, Fumitory, White Clover, Goosegrass, Sow-thistle and Wild Lettuce.

Goosegrass is a plant all kids love to throw at each other to see it stick to their playmates clothes. It has other uses too and the seeds can be roasted, ground and used as a coffee substitute and the rest of the plant can be cooked like spinach.

I spotted Great Plantain, or White Man's Foot, as some Native American tribes once named it, because it sprung up wherever the white men went. It looks like it is doing the same here because I have seen the plant in the heart of places like Las Americas too.

There was bracken and brambles with juicy berries ripening in the sun. It could have been a hillside back in Wales. I was tempted to munch on some of the wild fruit but little did I know of a much more delicious treat awaiting me.

I ventured a few yards off the road and in a rough grassy area I saw grasshoppers jumping everywhere, brown butterflies from the Satyrid family, a Red Admiral and bushes so laden with golden juicy plums, so ripe they were falling on the floor all around. Needless to say I couldn't say no!

So far it had been sunny, although the light was being filtered through the clouds, which were getting thicker. I wanted to investigate the woodlands further on up the road so set off again.

The cloud was now really coming down and it was like being in a typical British fog. At this point a car with its headlights on pulled over to ask me if I knew where there was a restaurant around there.

I couldn't help. Not only was I new to the area but also visibility was now down to a few yards.

Across the road I could just about make out the figure of a horse in a field. I thought it would make a good photo. It didn't because all that my camera registered was a swirling greyness.

I carried on walking and just down the road I went past a restaurant that the driver must have gone right past. I could now see the signpost for the forest too, well just about.

Very soon I was in the woodland and what an amazing place it is. Apparently this is some of the only remaining forest of this kind in the world, and I can easily believe it.

Tree Heather and Canary Pine are the main trees and the trunks and branches are festooned in weird lichens and mosses. Orb spiders have spun their intricate webs, which glisten with the drops of moisture.

Best books about Lichens and mossess

Find out more about these weird plants

Old Man's Beard lichen hangs down like the Spanish Moss you see in American movies set in swampland. Green moss and pine needles carpet the ground.

Some of the needles get caught in forks of branches and the lichen grows out of them and from bits of broken twig, which has also become trapped there. It all smells of pine resin and other earthy aromas.

The fact that lichens grow so well there shows that the air is clean because these plants will not thrive in areas where there is pollution.

The air was also very wet and my clothes were soaked just from walking in the clouds. It is like being rained on but not from above but from all around you.

Every now and again the cloud would allow the sun to shine through and in clearings I saw more butterflies and dragonflies as well. It surprised me to find so many living in such a wet place but they seem to be cued to take advantage of any sunlight and take to the wing as soon as it appears.

Then I heard thunder and felt some proper raindrops so I thought I had better make my way back to the bus stop. Getting soaked by clouds is one thing but a torrential downpour is not something I relish when trapped outside.

I enjoyed inhaling deeply the moist piney air as I walked briskly but paused to look at a wonderful specimen of an edible Chicken of the Woods fungus growing out of a decaying stump.

Soon I was in the welcoming shelter of the bus stop, which had houseleeks growing on the roof and more spider webs glistening where they hung. Well, the 345 duly arrived and in about 20 minutes I was back in hot, dry sunny Puerto, and it only cost 1.15 Euros with my Bono pass. Bono bus tickets can save you as much as 50% on bus journeys in Tenerife so are well worth buying at bus stations and selected shops.

By now my clothes had dried out and I felt like I had returned from a trip to another world, an enchanted forest worthy of being the setting for another Lord of the Rings movie.

Visiting the remote mountain villages of Tenerife's north are like taking a s... 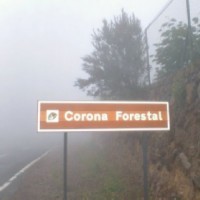 Visiting the remote mountain villages of Tenerife's north are like taking a step back in time. Las Carboneras is one such hamlet.
15%  0   2 BardofEly
Frogs