Robin Williamson came to fame in the late 1960s when he was a founder member of the Incredible String Band. He went on to have an "incredible" solo career.

From Incredible String Band to Celtic Bard
Scotland-born multi-instrumentalist Robin Williamson has done it all. He came to fame as a founder member of the sixties psychedelic folk-rock group The Incredible String Bandand played Woodstock, but moved on from that period of his life to become an accomplished poet, storyteller, author and Celtic bard in every sense of the word.
Robin is a skilled harpist and plays both traditional folk tunes as well as his own songs. He also plays guitar, bass, violin. harmonica, keyboards, bagpipes, whistle, banjo, mandolin, sitar, oud and a whole host of instruments, some of which you may have never even heard of such as the gimbri. The Incredible String Band were one of the first acts to incorporate Asian and African instruments along with ethnic influences into their performances alongside more traditional ones.
In many ways they were the first successful purveyors of world music. If Robin came upon an instrument on his travels he would find out how to play it and the chances are it would end up being in a song or several.

Verses at Ellesmere by Robin Williamson

A classic song by Robin

The Incredible String Band achieved a great deal in their time and had a great influence on the course of music and very many musicians including such greats as Led Zeppelin. "The Incredibles", as their fans often call them, were not afraid to take chances and experiment, and this fitted in very well with the spirit of the times.

They were one of the first acts to incorporate the sitar into their music and the hippies loved them for it. The Incredible String Band albums such as The Hangman's Beautiful Daughter have become regarded as classics.

The Incredible String Band were as alternative as you could get. With their use of open tunings for the guitar and an odd selection of instruments they were pioneers in every sense of the word.

But after the band went their separate ways and had gone through various line-up changes, Robin struck out on his own and forged an incredible career as a solo performer that has had him hailed as a genius by many of his fans.

In a very prolific career he has recorded many albums that contain his own songs, his interpretations of traditional folk songs and tunes, some electronic and New Age style pieces, harp tunes, poetry, spoken word narrations of Celtic stories and even an album of Music For The Newly Born .

Some of these albums came out as cassettes only and were published by his own Pigs Whisker Music and were distributed via his mail-order business, Robin Williamson Productions.

Robin's own songs, which for me personally, is where I think he really excels as a singer and songwriter, are a very varied bag but all are top quality compositions both lyrically and musically. They could loosely be described as folk but with a very Celtic feel to it due to his voice, subject matter and instruments. Robin writes of love, his travels, social commentary, his personal life and reflections on it, and many songs with a very mystical and pagan feel to them.

My favourite albums of them all areTen of Songs and Songs of Love and Parting . The first of these two albums is worth getting for the songLammas alone. Here are some of the lyrics from Lammas :

"Summer of kisses, summer unlasting to walk all never and now

of the ermine darkness

between hills till all tangles rest

in love and alone through the vowing harvest.

Once of a summer it was the fine of scythes

to hear the hour bells chime 13

with a cherish of ghosts through the eel grass ..."

As a performer Robin has played thousands of gigs in all sorts of venues, from being a main act on festival stages, such as the Avalon stage at Glastonbury Festival, to much smaller and intimate settings that include stages set up in art centres, castles, cafés and church halls.

His main instruments have been acoustic guitar and harp but he often plays other smaller instruments like penny whistle and harmonica on some songs. Robin Williamson gigs are always very different and can be full of surprises. He sometimes plays very unusual covers of well-known songs with one of the weirdest being the Robin Williamson version of the Motorhead heavy rock hit Ace of Spades .

Besides playing solo Robin has also toured accompanied by former-Pentangle guitarist John Renbourn and the pair have recorded together too.

Over the last decade or so Robin has been performing with his wife Bina Williamson too. In Incredible String Band days there were two women in the band - Licorice "Likky" McKechnie (Robin's girlfriend at the time) and Rose Simpson- and in many ways Bina has carried on where McKechnie left off in contributing backing vocals and instruments when she appears with Robin.

Besides all his music and performance skills, Robin Williamson is also the author of several books. He wrote two music books with English, Welsh, Scottish and Irish Fiddle Tunes being published in 1976, followed by the Penny Whistle Book the year after.

Robin's epic-length poem Five Denial's On Merlin's Grave was published as a book in 1979. Then in 1981 he collaborated with Dan Sherman on writing a novel entitled The Glory Trap .

Robin Williamson also wrote Holy Howlers (1987), The Craneskin Bag: Celtic Stories and Poems (1989), and Wise and Foolish Tongue: Celtic Stories and Poems (1991), as well as collaborations where he co-authored books with RJ Stewart and John Matthews. The most recent of these being The Bardic Source Book: Inspirational Legacy and Teachings of the Ancient Celts (1998) by Robin Williamson and John Matthews.

Robin Williamson has distinguished in himself as far more than being a singer-songwriter but rather he is an all-round performer, creative genius and modern Renaissance man.

Classic songs and music by the Incredibles

For more info about Robin Williamson 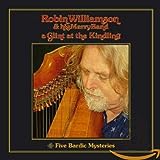