Carmilla: The Other Path in Modern Vampire Lore

The stereotypical vampire should have been a woman. Her prototype would not have been Dracula, but Carmilla. So what on Earth happened to derail her?

Before Bram Stoker ever put pen to paper, there was Joseph Sheridan le Fanu.

Le Fanu has been called the Father of Victorian Ghost Stories. His output was truly amazing; his writing is far more accomplished than his fellow Dubliner. Comparing 'Carmilla' to 'Dracula' boggles the mind. How did the latter ever over-shadow the former?

'Carmilla' is Le Fanu's rebel yell as an Irishman. It had it all - dark Gothic settings and sensual characterizations. He set the foundations for so much which followed, including 'Dracula'. Moreover, his vampire was female and undoubtedly lesbian. Hollywood chose Stoker's story instead.

She runs as a dark seam of references (oblique or otherwise) in the background of so many vampire stories. Ernessa, in the 2011 movie The Moth Diaries is based upon her.

In the HBO show True Blood season three, some of the main characters stayed at the Hotel Carmilla.

Tom Baker's Dr Who ran into her during State of Decay. She's everywhere in anime, whether it's openly as the villain in Vampire Hunter D: Bloodlust; indirectly hinted, as in Helsing; or referenced as musing, like Irene Diaz did in Black Butler volume 10.

Cradle of Filth and Kate Bush are just two of the musical artists to have written songs about her.

We would be here all day if I was to list every mention in all media. Story-tellers and entertainers know about Carmilla. In terms of vampire tales, she's existed almost as a guilty secret, skulking in the shadows as Dracula takes the limelight.

Not that she's been ignored entirely. There have been some attempts to bring her story to the silver screen too, including The Vampire Lovers (1970) and Lesbian Vampire Killers (2009). But audiences were already enamored of their male vampires. They wanted the count, or his more modern counterparts Lestat, Edward, Bill and Eric. The victims had to be female, preferably clad in their night-gowns helpless against the horror tapping at the window.

Carmilla was shocking in 1872. Over a century later, it seems that we're still not quite ready to embrace an aristocratic female vampire, who befriends, seduces and feeds upon innocent young ladies. Especially when said 'victim' is as strong and competent as Laura.

This Italian Gothic Metal band is just one of many artists to have been inspired by Le Fanu's darkly seductive vampire.

Written in Dublin in 1872, this story has become the inspiration for every lesbian vampire story ever since told. 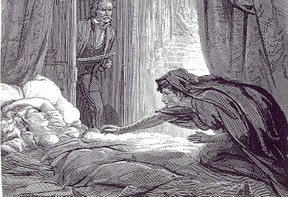 Joseph Sheridan Le Fanu definitely took his cue from Coleridge's Christabel. In many ways, he completed that unfinished tale. The parallels can be drawn from the outset, but then Le Fanu veers off along his own path.

There are other influences too. Certain details retain hints that Le Fanu knew all about the history of Elizabeth Bathory, or at least parts of her lurid legend, like the bathing in blood.

Carmilla is a novella. It's only 72 pages long and much of that consists of the lavish descriptive style, so beloved of Victorian writers. To the modern writer, the pacing can seem a little slow, but I've never found it such. If you let Le Fanu take you into the scenery, then the climactic drama is much more shocking.

The action takes place in Styria, down in the south-eastern corner of Austria. At eighteen years old, Laura lives in an isolated castle with her widowed father and their servants. She's anxious to enter the world. It all seems so far away. Extremely lonely, Laura becomes unduly excited about the prospect of a visit from a woman her own age. Then falls into bitter disappointment, when those plans are dashed.

Her potential friend and companion suddenly took ill. She dies within a matter of days.

In a bid to cheer his daughter up, Laura's unnamed father takes her for a walk along the forest road close to their home. Accompanied by her female tutors, they witness a carriage hurtling out of control pulled by panicked horses. It upturns, but none of the passengers are seriously injured. Except a teenage girl named Carmilla, who is knocked unconscious.

Laura stares in shock. She recognizes the carriage crash victim. Twelve years previously, when Laura had been just six years old, she had experienced what the adults called a nightmare. But she had always been sure that there was much more to it than that. The prone teenager looked just like her visitor that night.

Anxious to complete her journey, Carmilla's mother arranges for her daughter to stay in the castle. The prospect of someone to hang out with banishes all of Laura's doubts. They will only be due a resurgence when Carmilla tells her that she recalls their previous meeting too.

But by then, Laura and Carmilla are firm friends, wrapped up in deep affection. Only this is the deadliest of embraces, and Laura is fading more each day.

As soon as anyone mentions Carmilla, the next comment is that it involves two young women in love. They're not wrong. 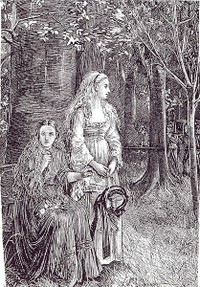 Many readers make the mistake, based on Carmilla's much vaunted reputation, that there will be scenes in this story describing explicit lesbian activity. There is not.

There's much to read between the lines, and some highly suggestive dialogue, but Le Fanu was not writing pornography. I reached the final sentence in no doubt at all that Carmilla and Laura had been lovers. They were in love, which is why Carmilla's guard was let down.

But it's still a Victorian novella. Certain things happen outside the narrative. So subtly done, in fact, that there has even been the occasional lone voice shrieking that they were just friends all along. Yeah, and Liberace was straight too.

You only have to read the language used between them to see the dark romance blossoming and taking over. When Laura moves around the room, Carmilla's 'glittering eyes' followed her with 'a kind of shy smile that (Laura) could not decipher'. It's a wonder that she couldn't, because a couple of minutes previously, Carmilla wasn't beating around the bush.

'"You will think me cruel, very selfish, but love is always selfish; the more ardent the more selfish. How jealous I am you cannot know. You must come with me, loving me, to death; or else hate me, and still come with me, and hating me through death and after. There is no such word as indifference in my apathetic nature."'

I just don't read that as Carmilla saying that she quite likes the occasional chat with Laura over a nice cup of tea.

Nor is Laura entirely oblivious here. When things begin to go wrong, her first thought isn't to run a mile from Carmilla. It's this:

'Dim thoughts of death began to open, and an idea that I was slowly sinking took gentle, and, somehow, not unwelcome possession of me. If it was sad, the tone of mind which this induced was also sweet. Whatever it might be, my soul acquiesced in it.'

All of this about thirty seconds before she's talking about soft hands drawn across her cheek and neck, warm lips kissing her, caresses, her pounding heart and how her 'breathing rose and fell rapidly and full drawn'.

Forgive me if I add my voice to the overwhelming chorus pointing towards a lesbian love affair in Carmilla. We never did learn what was happening to affect Laura's breathing so much, but we can guess and vampirism was only part of my mental image.

None of this happened in the book... But then again, when Hammer Horror envisaged Carmilla, she went after male victims too.

Why Isn't Carmilla as Famous as Dracula?

It was published first. The author already had a best-seller. The writing is superior. So why do we prefer our vampires to look like Dracula? 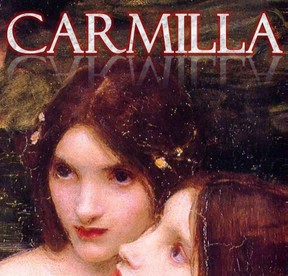 On the surface, it should look like Joseph Sheridan Le Fanu's novella would wipe the boards.

When he wrote Carmilla, he was tapping into a very rich tradition of female vampires. The earliest vampiric figures of all had been women.

Historically, cases like that of Arnold Paole and Peter Plogojowitz might have been the most famous, but they were surrounded by many more which involved the feminine undead.

When Coleridge had written his vampire into poetry, he'd made her female, despite his inspiration being male.

It was Byron and John Polidori who had broken from tradition by making their vampires male. All those 19th century authors following suit were pretty much reinventing Lord Ruthven over and over again. Le Fanu had disregarded what looked like a modern fad, mere decades old, to dive into a zeitgeist which had survived centuries. The human psyche, it seemed, wanted monstrous women with fangs, not men.

When Sheridan Le Fanu published Carmilla, it was extremely well received. It was quickly republished too, in a second collection, such was the appetite for reading it. Bram Stoker was certainly inspired by the storyline. He stole a couple of key devices for Dracula.

However three factors played firmly into Stoker's hands. They would combine to diminish Carmilla and raise Dracula into archetypal status.

Carmilla was not only written twenty-five years too early for the movies, but it contained themes which movie-makers have disdained.  Foremost amongst these is the notion of lesbianism. Most references to her ignore that aspect entirely. If Carmilla does appear, then she's heterosexual.

Only one director has attempted to properly adapt Le Fanu's story. In 1960, Roger Vadim gave us Et Mourir de Plaisir (And to Die of Pleasure). The French movie was translated and released in English as Blood and Roses, but it was ten minutes shorter. The US edit had carefully cut out any reference to Carmilla's lesbianism. Laura was merely a gullible friend and victim.

It's only when you get to the 2009 movie Lesbian Vampire Killers that Carmilla is allowed to be gay. Even then, the story isn't that laid out by Le Fanu. Laura has been air-brushed from the picture and the whole thing is played for laughs. She's not Carmilla. She just bears her name.

In short, it would seem that popular culture still isn't ready for Carmilla and Laura. The world would much prefer Edward and Bella.

You must have posted that as I responded! Yes, she does. It apes how they've been culturally perceived quite well. Which is a great shame.

Also fitting how Carmilla essentially worships Dracula in the game.

Yes, she will be, though Carmilla there has little else in common with Carmilla in the story. The gaming one is subservient to Dracula, worshiping him like a God. It's really weird to see how that worked out.

Is this the Carmilla from Castlevania: Circle of the Moon?

There was undoubtedly a vampiric theme developing in Samuel Taylor Coleridge'... 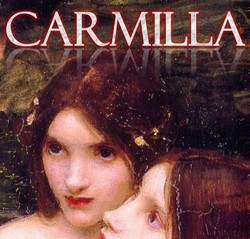 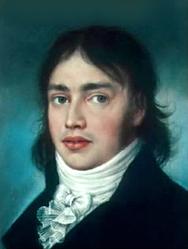 There was undoubtedly a vampiric theme developing in Samuel Taylor Coleridge's 1797 poem 'Christabel'. But more significant was the vampirism inflicted on it!
100%  30   11 JoHarrington
Vampires