Are you looking for a dinosaur rug for a child's bedroom or playroom? We've got a great selection of dinosaur rugs including bright and fun and educational.

A dinosaur rug is a great finishing touch for a dinosaur bedroom. It makes a great place to sit and play with dinosaurs in a playroom too.

Dinosaur rugs are an excellent choice for preschools and kindergarten classrooms too - kids love dinosaurs!

We first came across our favorite dinosaur run in a dinosaur museum. They had a play area with big stuffed dinosaur toys and paleontologist dress-up costumes. And on the floor was a really big dinosaur rug.

Where can you put a Dinosaur Rug?

With letters and dinosaur names

The We Dig Dinosaurs rug pictured above was the rug we first saw at a dinosaur museum.

It has letters around the outside and the names of the dinosaurs appear on the rug: Stegosaurus, Pentaceratops, Velociraptor, Oviraptor, Tyrannosaurus rex, Iguanodon, Diplodocus, Brachiosaurus, Compsognathus and Ankylosaurus. This is brilliant for parents and teachers who might not yet be experts on all the dinosaurs species. We like that popular dinosaurs like T-Rex are included along with some less well-known ones.

The prehistoric scene is really well done, it's brightly colored but realistic and includes a volcano - kids love a volcano! The scaly background around the edge is another nice touch.

The rug itself is good quality and designed to be hard-wearing. It's available in a choice of sizes and shapes. It was the big 10 ft.9 in. x 13 ft.2 in version that we saw at the museum, but smaller options are available, plus oval and round versions of the We Dig Dinosaurs rug.

The Dinosaurland Rug above is a smaller and cheaper option for a child's bedroom. The bright blue will look great as a centerpiece in a brightly colored children's bedroom.

We like the vibrant preshistoric landscape, with big easily recognisable dinosaurs. The dinosaur tracks around the edge are a nice touch.

The rug is 39" by 58" and a non-slip foam backing making it a good choice on a wooden floor.

And our final dinosaur rug is the Blue Dinosaur Fun Area Oriental Rug from KAS. With it's pale blue and beige color scheme this rug will look gorgeous is a earth-toned dinosaur bedroom.

It has a good selection of dinosaurs that look very cool with their spots and stripes! This is a very stylish dinosaur rug which would look great in an area of a living room designated as a play area. Very modern.

The run is available in 3 feet by 5 feet or 5 feet by 7 feet sizes. The is a high quality wool rug backed by a 5 year warranty.

We hope you liked the dinosaur rugs

I could have used one of these when I was about 7 years old.

Children's alarm clocks are not only fun, but an important tool for children. 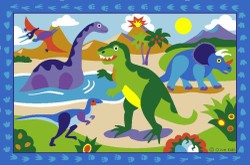 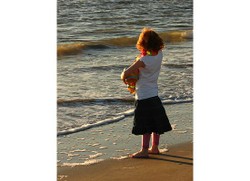 Children's alarm clocks are not only fun, but an important tool for children.
85%  6   9 nickupton
Fun Bedrooms for Kids 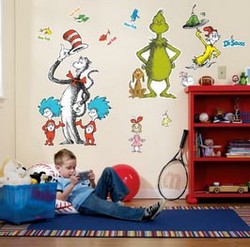