Compost Stew, an alphabet book for children, shows readers how to cook up a healthy recipe for the environment in a most delightful way.

I highly recommend everyone, big and small, have a copy of the Compost Stew book laying on their kitchen counter as a handy reminder to first check all food items about to be tossed into the trash for composting value before tossing away.

In the reading of Compost Stew, you may find as did I that not just Kitchen scraps are good for the composter, but also things like Hair snippings and even a few Seaweed strands too. Who knew? I just might have to pick up a handful of seaweed next time I’m walking the beach with my dog!

I enjoyed the author explaining to kids along the way, too. For instance, phrases such as ”Laundry lint from dryer traps” and “Zinnia heads from flower beds whose blooming days are through” show and tell the children the where and how to find things for the stew we brew for nature.

Not a thing pleases me more than to see a child with a book in hand, especially if the book is interesting as well as instructional for the child. To me, any book that aims to teach children to become good stewards of planet Earth is a great one.

Yes, Compost Stew is a five-star book for kids to learn their ABC’s and to take a beginner’s look at ways to treat Earth and to help save our planet. What a wonderful way for children to be introduced to environmental issues that concern us all.

We truly do love the book, as well as the home brew of compost stew.

My Mother-In-Law’s Tongue plant gets plenty of compost stew to eat and thrives beneath my not-so-green thumb because of its regular feedings.

Because I live near and walk the beach daily, I have access to seaweed with which I feed my houseplants, in a simplified method of seaweed composting. My plants, and my thumbs, seem to be a bit greener because of this way of feeding them every couple of weeks.

Compost Stew: An A to Z Recipe for the Earth

Written by Mary McKenna Siddals and Illustrated by Ashley Wolff

Out of the mouths of babes comes the best reading recommendations for our children. Not a thing says Great book for kids! better than a kid sharing his thoughts after reading the book.

This is also a tip for children's book review writers: Read the book with a child, discuss its content, then write a review—together!

"Feed your coffee grounds to the worms and make beautiful compost. Get a handful of composting worms for an easy, indoor composting solution."

Reading, Reviewing, and Raving about Books for Kids

Moments Define My Passion for Children's Books
I believe books for kids hold the magic of imagination and knowledge from cover to cover, if we but turn the page.

Are you an environmental chef who loves Compost Stew?

Absolutely! At whatever age we, children and adults, begin to be concerned with how to feed our garden, Compost Stew will teach us the way.

It sounds as if an aspiring gardener, of whatever age, could learn a lot with these books.

This was fun and rather interesting. I enjoyed both your article and the comments it elicited :)

I am mad keen on recycling, and, as I am a gardener, compost is a key part of my strategy. I make garden compost in heaps/bins, and make kitchen compost from scraps, which I make in a plastic compost bin. Getting manure is not always easy, so what I do is I combine pelleted chicken manure, which comes in large pots, with compost, so the whole allotment is covered every winter. I also add rock dust to the mixture, which mineralizes the soil. Ideally I then, in Autumn, cover the lot with leaves. To keep them in place I soak them and press them down. You can see the leaves breaking down in Spring.

Sounds to me as though you know the Compost Stew recipe quite tastefully! And it sounds like you have the ingredients for a composting cookbook of your own.

Here is another tip. In winter, when compost bins slow down, you can dig a compost trench. Dig a trench in the earth and slowly fill it with your waste, then as you do cover it over. The decay will rob some nitrogen from the soil for a while, but as nitrogen is constantly recycled it will return as bacteria in the compost die off an decay. This is why this technique is best in winter. The ground where this is practised becomes great for peas and beans.

The key to compost is the development of humus. This is a complex colloid, black in colour, that develops from decaying organic matter. The black colour retains heat in the soil, and the large, complex molecule, which is yet improperly understood, retains water and nutrients, and acts as a glue to bind soil together. You should always ask yourself how black is your soil. I love a good black soil rich, as this means that it is rich in humus

Thank you for enlightening us on human and animal waste as pertains to composting. It sounds as if you're quite informed on the topic.

You can physically compost cooked food, but as Telesto says, it attracts rats. The way to compost cooked materials is to use a wormery, which is sealed and which thus prevents rats from entering or even smelling. There are two nutrients that derive from a wormery, the liquid, which is incredibly nutritious, though it stinks, and the compost itself.

Human waste material can be composted, but it is unwise to put it onto food plants, because although a well-used compost toilet can destroy 99.99% of pathogens and parasites in the six months that it takes to compost, there is one species of ring worm whose egg can survive. The technique is to spread the compost around fruit trees and bushes, and the egg, if it is there, will be eaten in the soil or the worm eaten if it hatches.

Animal bodies should not be added to compost,as foxes and rats will dig them up. I buried a dead hedgehog recently on my allotment, and the fox dug it up twice until I reburied it and put a bin on top.

The human materials that can be easily composted are hair and nail clippings. Nail clippings provide the calcium that is lacking in compost, and they dissolve in the compost acids, with the calcium being retained in the complex molecular structure of humus, which holds on to water and nutrients.

Ideally you will not only use compost but leaf mould, which provides some nutrients, such as calcium. I like to cover my ground with leaves in winter, so that they rot down and become soil. You can decay the leaves first, as leaf mould, it takes a year

Of course you are charming :-) I use compost for food plants and it is my personal preference not to introduce human nor animal bacterial issues.

I do put fingernails in... I sound charming, don't I? But nothing animal, it (apparently) attracts rats. And we have a big enough problem with them in London as it is.

The World is your Oyster, the Pearl is Grandfather Twilight by...

If the world is to be my oyster, the pearl would need be the Grandfather Twil...

Children Can Change the World Before Bedtime Book

If you plan to read books with children and you believe kids can make a diffe... 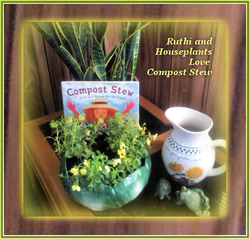 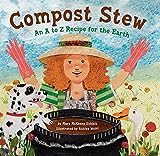 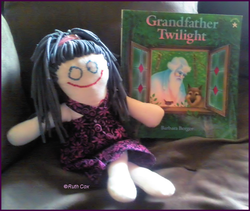 The World is your Oyster, the Pearl is Grandfather Twilight by Barbara Berger

If the world is to be my oyster, the pearl would need be the Grandfather Twilight moon in the bedtime story book for kids by Barbara Berger.
78%  10   7 RuthCox
Children's Books 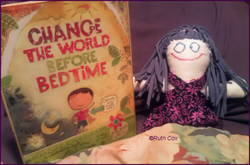 Children Can Change the World Before Bedtime Book

If you plan to read books with children and you believe kids can make a difference in our world too, then CHANGE THE WORLD BEFORE BEDTIME is the book to read with them now!
Loading ...
Error!