Your addiction doesn't need to control you. You need to learn how to be the boss. Brain science tells us how.

The addiction word often brings to mind the sordid world of illegal (or legal) drug addiction. This can be what I refer to in the following article, or it may refer to the internet, pornography, shopping, or just about any singular activity which has the potential to negatively interfere or impact upon work and/or relationship environments. In other words, if this singular activity is, right now, a root cause of employment or relationship difficulties you need to do something about it. Some addiction treatment counselors might advocate 'going cold turkey', meaning that the activity should be immediately stopped and for the rest of your life not ever indulged in again. That's fine if you have the fortitude or motivation. I did that with smoking (after many failed attempts). However, you may instead choose to decide to minimize the damage your addiction is causing or has the potential to cause. This is what this article is about.

You are the boss

Never allow a substance or harmful activity give you orders. This is about as nonsensical as having any inanimate object as your life advisor. Remember that all these substances, materials and actions have only gained an upper hand because you have let that situation arise. You are the one who needs to be in control, and the way to begin this is to reassert your natural mastery in the order of things. You are the master of your own destiny, and you are not here to be enslaved by a mere substance or harmful activity. Do yourself a favor and constantly remind yourself of this fact.

The above, rather crudely, illustrates the neural pathways that brain science was later to prove did exist.  The development of addiction occurs when 'reward' neurotransmitters become overstimulated and cause a downward dysregulation of dopamine, (Koob, 2006) which it turn causes the user to increase dosage in order to create the initial effect of when the substance or behavior was first encountered.

Swiss psychologist and psychiatrist Carl Jung considered  that there was only a limited amount of psychic energy or 'libido' and it could not be renewed from outside resources. When one does try to renew via 'compulsive behavior', there is a 'risk of entering into the spiraling dysregulation of the addiction cycle' (Koob, 2006).

The 'hedonic' is the theory whereby every human has a 'set point' of happiness, to which one returns to despite major highs or lows in one's personal history. Finding or returning to this 'set point' requires time and resource, which,  when related to the control of addiction is an argument for a period of 'time out'. This 'time out' allows the above spiral of dysregulation to be interrupted and the well-worn neural pathways of habitual action some chance of repair to their natural state. In the process, you may discover your 'set point' of happiness, left behind in a fruitless pursuit to renew a libido of only limited capacity. It is somewhat contradictory to say that in the process of denial can be found a hedonic 'set point' and this sense of denial is from where the Calvinism aspect might be derived.

How to survive the spiraling cycle of addiction

The above suggests a strategy:

1) Periodically, take time out ( 3 to 4 weeks should be enough time to repair neural damage)

3) Set high goals - if attained allow yourself some reward

Yes, you can control your addiction. Doing so allows you to indulge periodically over a long period, which is much better than experiencing a jadedness which might push you into yet more dangerous substances or behaviors. Occasionally, try to re-discover that state of happiness which you may have had without the outside artifices supposedly necessary for happiness. Reward yourself with your indulgences - but only when it has been earned. (More Calvinism!)   Don't permit addiction to destroy you. Either control it, or it will control you.

Reference: Koob, G. (2006). The neurobiology of addiction: A hedonic Calvinist view. In W. Miller & K. Caroll (Eds.), Rethinking substance abuse: What the science shows, and what we should do about it (pp. 25-45). New York: Guildford Press.

Siegel's book, Mindsight: The New Science of Personal Transformation offers some fascinating vignettes, and insights,  on brain science and its application.  All brilliantly explained. Recommended. 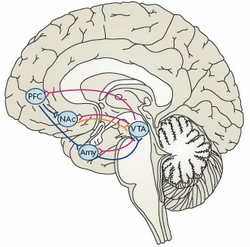 Rethinking Substance Abuse: What the Science Shows, and What W...
65%  6   7 CJRose
Addiction and Recovery