Coope, Boyes and Simpson are a wonderful a capella trio who sing Enlish roots music. They perform traditional folk music as well as modern songs with very clever lyrics.

Last Christmas, my partner, who knows my musical tastes well, bought me two albums by Coope, Boyes and Simpson. Wow! I've hardly listed to anything else since and we've even been to see the trio live. Superb.

Barry Coope, Jim Boyes and Lester Simpson sing a capella harmonies. I adore a capalla singing - I often think instruments get in the way of good music. I'm also a folk music fan, I love the music, the storytelling and the traditional and social commentary. And I like a lot of early music. These guys are just perfect for me!

They perform a mixture of traditional English roots music, music by unusual songwriters, and their own compositions. Stick around and I'll introduce you to some of their music.

Unison in Harmony is a gorgeous song from the album What we Sing is What We Are and includes the title of the album in its lyrics.

My 4 year old son, who loves dinosaurs, really likes this song and joins in. Although he sings 'raise the raptors'. Makes me laugh every time!

Listen to a live version below. The quality isn't very good but you'll know if you like it!

What We Sing is What We Are - Amazon UK

What We Sing is What We Are

I love this song

I'm having trouble picking a favorite from the As If ... album. So I've going to mention a few.

I love Coope, Boyes and Simpson's version of Golden Bird by Levon Helm. Haunting. It's a song that tells a story and creates imagery.

I love the lyrics to We got Fooled Again. "No jobs, no factories, we don't even make a fuss". Genius.

And the Emperor's New Clothes is hilarious. The children's fairy tale get's a modern makeover. Listen out for the regalia line in the sample. Naughty!

My younger son who is nearly three, calls the trio the Fal De De Men after the lament in The Slave's Lament/Goal Song. Very cute.

But I haven't mentioned The Cool of the Day. Possibly my favorite, my older son loves this one and sings along. It's religious and I'm a humanist but I love it anyway.

Warning: Don't listen to A Hill of Little Shoes. It's too sad. A Clive James/Pete Atkin song. I have to hit next as fast as I can when this comes on. Much too sad.

As If - Amazon UK

This promises to be an excellent introduction to the trio and to English folk music in general.

Waiting by the Road (below) is a great example of Coope, Boyes & Simpson singing modern folk. Listen to the lyrics. Great stuff.

Waiting by the Road

Coope, Boyes and Simpson - What do you think? 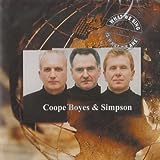