With the popularity of the Tim Burton films Corpse Bride & Broadway hits like The Addams Family, goth weddings are on the rise & the zombie bride is a popular theme for costumes.

Are you planning a wedding for the end of this year? A great idea for a couples costume would be a goth-style bride and groom. Corpse bride-inspired weddings and bridal showers are on the rise. So much fun for Halloween.

Many couples who plan Halloween season weddings have theme weddings in the vein of Corpse Bride, Twilight film inspired or other goth styled. Frankenstei 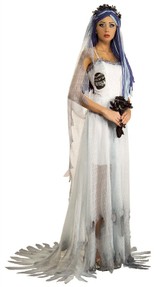 n and the Bride of Frankenstein are timeless. Are you looking for a Day of the Dead bride costume for a parade or festival?

For several of the skeleton bride costumes, ghost brides there are corresponding ghoulish grooms. If there isn't one specifically made to accompany the bride, put your man in a Frankenstein or Mummy costume and he'd be a fine groom just the same!

While these costumes are very trendy, interestingly enough, some of them are also modest. You'll see that the adult versions of some come traditional and a bit more sexy. If you're looking for a costume that doesn't leave you cold and feeling too exposed, but you still want to be on trend with the Halloween scene, this may be the way to go!

Above you see the Corpse Bride Costume

You may want to check out the Sexy Corpse Bride Adult Costume, too.

Did you see Tim Burton's Corpse Bride?? A man who puts a wedding ring on the finger of a woman's skeleton as a joke gets more than he bargained for when she comes back as a ghost and claims that she is now legally his bride in the stop motion animated feature film, based on a 19th Century Russian folktale.

The Bride of Frankenstein : Maybe the first Monster Bride we can think of?

A costume and an inflatable wig!

Love hurts - looks like it killed this Monster Bride! Comes with the dress and arm ties. Wig is sold separately.

Will you organize a Monster and Monster Bride flash mob for the season?

Looking for that Mr. Franken-Right?? He'll love you in this outfit.

Lady Monster Adult Wig (pictured) Cruella De Vil has nothing on her!

Become a part of the original love story of monster meets pretty monster this Halloween. This Bride of Frankenstein Adult Costume includes a black and white wig and a mummy wrap white dress. Pair with Frankenstein Costume (sold separately) for a great couples theme.

For your special date or every day, show your individuality, your quirkiness :)

Set in Victorian England, Tim Burton's Corpse Bride, is for the whole family. To quote composer Danny Elfman's merrily macabre lyrics, the story is a "tale of romance, passion, and a murder most foul."

Which version will you choose? Play it for a party or have it playing in the background as trick-or-treaters drop by? The soundtrack will add to the mood!

Victor Van Dort is off to his arranged marriage to the shy Victoria.

After making a fiasco of his wedding rehearsal and fleeing into the woods, he slips Victoria's wedding ring on what he thinks is a gnarled tree branch. It's actually the finger of the deceased Emily.

She is revived from her cursed deathly state. According to the Netherworld laws, she giddily expects Victor to make good on his vows. 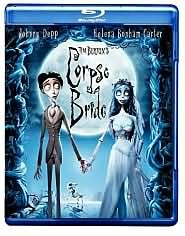 Give out instead of or with candy: Attach to costumes and trick or treat bags for visibility 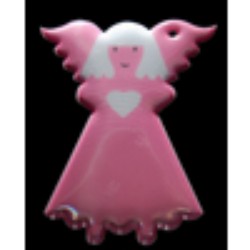 Place reflective items on the back of your child's bike for those days when the sun goes down early and you want them to be more visible to cars. They can also be seen by bicycle lights. Pedestrians are sometimes hit by people on bikes.

Place one on their trick or treat bag or backpack. Can be attached to diaper bags, book bags, coats, dog collars, strollers, etc.

They want them on their jackets or on their bag packs because they're so funky, cute and cool. Best of all, these little cuties save lives in dusk, dawn and dark!

All reflectors are made of a plastic material that will reflect the light from the headlight of an oncoming vehicle creating a bright glow!

Reflectors- They can save lives any day of the year.

Think about how often we cross the street just to get to a restaurant or the grocery store. Your child is carrying out the trash in the evening or walking the dog. Wearing reflectors isn't really something only to be done on Halloween.

Reflectors work on foggy and rainy days as much as in the winter.

Use for the addition to your Corpse Bride Costume or a gothic appeal to another costume.

Be that living doll who freezes and then comes to life with little or no provocation.

Fits both children and adults. 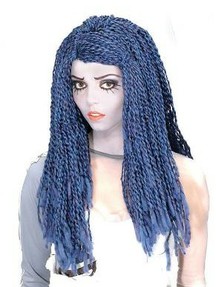 What an interesting collection. I love the Headless Bride prop Blue wigs tv and anime-inspired, popular for costumes, plays and dress upon 08/08/2011

Pink wigs tv and anime-inspired, popular for costumes, plays and dress upon 08/08/2011
Ad 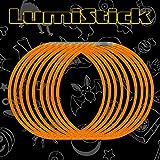