Classy and spooky! We all know that blood-sucking vampires like to look their best. These horror-filled costumes are perfect for Halloween parties everywhere.

The sound of bat wings and a certain mistiness in the air. Nervous innocents rush to grab their garlic and their crosses.

There are vampires out tonight. Hypnotic, seductive, the best looking monsters on the streets; and that red on their lips, is it lipstick? Let's hope that it's lipstick!

This Halloween you could be one of the sexiest, classiest undead creatures to ever prowl the midnight boards.

Just check out these costumes to see which one is for you.

Expensive, but stunning, these are outfits for those who really want to go to town on Halloween night.

In Character is a company with a growing reputation for out of this world, luxury costumes. They have excelled themselves with this vampiric couple from Versailles.

Versailles was the setting for the extravagant palace of Louis the XVI and his Queen Marie Antoinette.  It experienced terror of its own, when the couple were arrested and beheaded during the French Revolution.

But of all the nobility in peril during that bloody era, it seems that two were in their element. These vampiric French nobles are sure to make a splash at your Halloween party; though not in the way that history has led people to expect!

For the French female vampire outfit, you get a hidden extra.  A fully fitted petticoat is what gives that voluminous skirt its shape. The whole costume is made from 100% polyester, apart from a nylon inlay in the skirt's front inset.

The French male vampire costume is made mostly from 100% polyester, with some nylon in the vest. It is dry clean only.  Please note that you do not receive the hat, boot covers and walking cane.  They are sold separately.

You will, of course, have to do your own make-up and add your own fangs!

Every vampire costume needs some fangs. Choose between high end professional ones or plastic party favors.

Please note that while the party favors are only 50c (at the time of writing), they can be a bit of a mouthful.  Yes, that pun was intended.  Please feel free to laugh.

They are 2" wide and close with the pressure of your jaw against them. They're lots of fun! But if you're planning on wearing them all night, then you might find talking, eating and drinking a bit of a challenge.  Plus your jaw will start aching.

The professional ones are slightly more expensive, but will side-step many of those issues.

Classy and sexy, these traditional vampire outfits look like they were made for people who mean business.

Less showy, but still as effective are In Character's Midnight vampire range. Not so easily dated to an historical period, they look like an immortal twosome, who dress as they please.  And it does please!

(Incidentally, though I bill them as 'for couples', there's nothing stopping you purchasing them singly too.  I'm just pairing them together for ease of display.)

Like with most In Character costumes, these are made from 100% polyester with quality tailoring and stitching. They will last you for several years' worth of Halloween events to come. Unlike the Versailles range, these outfits can be washed in your machine.  A little more convenient then!

Taking More Vampires in your Party?

Blood-sucking outfits for all your family and friends here. Even the four legged kind!

Halloween Vampire Costumes for Babies and Toddlers
The blood-suckling world of twilight monsters never looked so adorable. Your infant vampire will look the part this season.

Halloween Vampire Costumes for Kids
Twilight, Dracula, Monster High, the blood-sucker of legend is never far away. These kids' vampire costumes for Halloween make for the best dressed spook in town.

In Character also has a Gothic Vampire collection, which looks amazing.  The Vampiress outfit has a full length dress, with an attached corset which ends in that wonderful collar. The long, lacy trims double as an over-skirt.

The Vampire costume comprises the long coat and the collar with the ruffled lace trim. It also includes the medallion. However, the gloves and pants aren't part of the package; and you'll need to add your own fangs and make-up too.

Both outfits are 100% polyester and machine washable.

Gothic Jewelry for Vampires
Cosplaying a vampire at a party? Or do you desire vampire chic to complete your look? Glamorous jewelry to get your teeth into!

The final In Character vampiric offering is also a Gothic coupling, which has seen the pair switched between 2013 and 2014.

Originally the Gothic adult man's outfit here was part of a set with the other Gothic adult woman's gown. I agree that the current arrangement - the male and female vampire costumes seen here - matches more precisely. Judging by the materials used, it was how it was always meant to be!

The (new) Deluxe Gothic Vampire outfits are part of the company's Elite Collection. They are again at the higher end of the market, but the quality does show.

The Vampira outfit has a full-length satin gown, edged with black lace, which will shimmer in the party lights.  It comes complete with a jeweled choker and lace petticoat. Please note that you will have to provide the Vampire's pants yourself, as they are not sold as part of this Halloween outfit.

For her, there is the Deluxe Hooded Vampira Robe with its lace up tied bodice.  It's 100% polyester and requires hand washing.  Relatively inexpensive, this constitutes a good deal, because the quality remains fabulous.

However watch out for the sizing. The arms and shoulders can come a little tight, if you don't order a size above what you usually wear.

For him, there is the Very Cool Vampire Costume. This isn't me bigging something up, it's actually called that! And plenty of people agree too, as it's the most popular vampire costume on Amazon. That's overall, not just by California Costumes.

Here is another one with mix and match vampire couple costumes, as Count Blood Thirst is often paired with the hooded robe vampira gown already shown. While Countess Blood Thirst here is actually billed as Blood Thirsty Beauty.

It all works though, so pick whichever suits you best. Or, as California Costumes puts it, 'slip your leading lady' into any of the accompanying outfits. Slip your lady... mmmm.

Please note that the accessories don't come with the costume. You will need to supply your own cane, fangs and shoes for the male vampire outfit, and the chalice, necklace, stockings, shoes and wig for the vampiress.

A definite pairing of vampire costumes for couples here by California Costumes. Plus it's a departure from the usual combo of red and black.

You have to admit that these look very stylish, above and beyond the classic vampire look. Both outfits have also received rave reviews, though many comment that it takes a good half an hour to lace up the baroness's arms!

These Halloween vampire costumes arrive as seen, give or take the female wig and boots, and the male pants and shoes. Those you will need to accessorize for yourselves.

California Costumes has come up with another different kind of look here. It's the Platinum Collection, as reflected in the color scheme and the title.  By 'title', I mean King and Queen of the Vampires costumes.

You will want to have the deathly pallor of these undead blood-suckers. Create it with these cosmetics.

Halloween Pumpkin Costumes for Adults
Grinning pumpkin heads are all well and good; until one turns its head to follow you across the room. Have fun with your own pumpkin costume this Halloween!

Yeti Costumes for Adults
From the snow-covered mountain tops to the raucous party next door, the Abominable Snowman has been seen. Roar! I say again, RAWR!

Halloween Skeleton Costumes for Adults
Clickity-clack, what's that? Something skeletal this way comes! Looking for something bone-shakingly spooky for Halloween? Check out the rattle-bones outfits here.

Halloween Ghost Costumes for Adults
There are some hauntingly good looks for your festive party this year. Grab yourself a spooky ghost outfit for Halloween; and practice those spine-chilling wails.
Updated: 09/11/2014, JoHarrington
Thank you! Would you like to post a comment now?
18

Oh! Good luck with that!

I'm dropping big hints with my other half. Hopefully I'll get it.

I don't think I have the endowments to pull that one off! But the Versailles one, I'd totally go for!

I have my eye on the Vampire's at midnight!

I think we all have our eye on that one!

I would love that first dress.

There are some hauntingly good looks for your festive party this year. Grab ...

Get in touch with your wild side! This Halloween, when the Wolfman prowls, l... 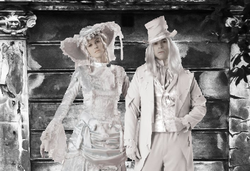 There are some hauntingly good looks for your festive party this year. Grab yourself a spooky ghost outfit for Halloween; and practice those spine-chilling wails.
80%  4   9 JoHarrington
Halloween Costumes for Adults 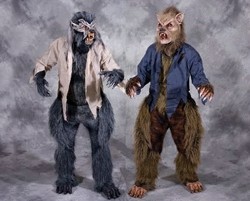 Get in touch with your wild side! This Halloween, when the Wolfman prowls, let it be you inside the costume. The alternative is too grisly!
Loading ...
Error!