My interviews with Jackie Chan, Dario Argento and the Pang brothers didn't end up the way I expected.

I've been a freelance movie journalist since 1993, and during these past 16 years, I've experienced quite a few weird things. I have a few favorite stories I like to entertain people with in bars (like the ones about strange journalists asking strange questions at press conferences), but they are way too long and need an article of their own.

But then I have my own interviews. Interviews made by me with celebrities with, well, limited skills in English. Here are three of my weirdest interviews:

Stockholm, 1996: Jackie Chan was in Sweden, promoting Rumble in the Bronx, and since the Swedish distributor knew I'm a big fan, I was booked to make a long interview with the legendary Chinese actor. The interview went fairly well, besides the fact that I had to concentrate really hard to understand what Chan said, but he was impressed by the fact that I - unlike the other journalists - had seen so many of his movies.

There was one movie Chan mentioned several times. He seemed to be very proud of it. Dungeon Monkey Party. What? Dungeon Monkey Party? I had never heard of that one, but I didn't tell Chan - and he gave me detailed descriptions of how the apparently famous fights were staged.

Stockholm, 1996: Italian horror director Dario Argento was guesting the Stockholm Film Festival, and I was doing interviews for a pilot of a proposed TV show. Now, I'm a big fan of Argento's, at least up until Opera (1986), so I was looking forward to this. However, another journalist who was supposed to interview Argento before me, didn't show up, and people told med Argento was really pissed-off and needed to be calmed down - something that made me nervous. But everything was fine when I arrived and we did the on camera interview, which turned out pretty well.

Except for one detail. I don't remember what I asked the man, but Argento's answer was long. Very long. Never ending-long. And during this looong answer, his English got worse and worse. I had no idea what the hell the guy was talking about, and my thoughts started drifting away. Were there any parties that night? Maybe we should go to a restaurant?

Suddenly I noticed Argento was looking at me. The crew was looking at me. They expected me to comment on what Argento just had said and ask him a new question. And I went blank. I was just sitting there. Staring. Sweating. All my questions were gone. After what felt like an eternity, I came up with a question and saved the situation.

The TV pilot was never sold.

Cannes, 2005: The Pang Brothers, Taiwanese directors Danny and Oxide Pang, were at the market at Cannes with a promo for their upcoming movie Re-Cycle (which premiered the next year and turned out to be a turkey). I managed to get an interview with the Pang Brothers, who are most famous for the original version of The Eye, and I met up with them in a corner in the market area.

Danny and Oxide looked very tired and slightly uninterested in answering my questions. One of them was leafing through a magazine during the interview. But what made things even worse, was the fact that they had problems understanding what I said - while I had a really tough time understanding them. Here's the strangest part of the interview. I think I mentioned the Swedish vampire movie Frostbitten, which I worked on, so I just had to ask them this:

Me: What do you know about Swedish movies?

Me: Yes, movies from Sweden.

Me: Sweden is a country. I am from Sweden.

Me: So, you don't know of any Swedish directors?

Me: He's an American and a writer.

The interview went on like this for a while. It got weirder and weirder. Then I thanked them for letting me talking to them, I scratched my head, and went out for a beer.

The interview was never published.

Oxide?? That's a name? Really! Well anyway, your retelling of interviews was quite entertaining. Thanks for sharing. 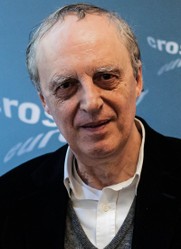