Buy genealogical binders to keep all those papers and photographs tidy, which are otherwise lost to the scrap-heap.

Until every last scrap, in every archive in the world, is digitalized, there will always be papers in genealogy.

Birth certificates, death certificates, marriage lines and baptism cards; leaflets from towns, where your family once lived; letters from elderly, distant cousins; photographs, maps and headstone rubbings; notebooks filled on the go. They all add up.

It's time to get organized! Snap up some handy folders to store your family history.

Drowning Under a Sea of Genealogy Data

It's way too easy to end up with jumbles of papers spilling out of boxes and bookcases. Better to start as you mean to go on. 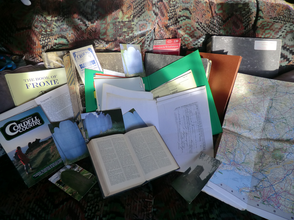 After twenty-three years of tracking my family history, I despair of the sheer volume of stuff that I have accumulated.

It's all necessary; fragments and clues in the great detective story that is genealogy. But it's also scattered in various places around my house.

There was no choice in the matter. It's all too bulky to fit in one area. Until I win the lottery and buy a stately home, I can't imagine being able to create my own archive room. A girl can dream though!

An unwelcome consequence of this is that disorganization does creep in. It's probably sheer laziness, but it's definitely also space. A certificate pertaining to a paternal ancestor from two hundred years ago might nestle alongside a note about my mother's second cousin. It happens.

What I wish is that two decades ago, I had thought to decorate family tree folders to maintain them all in order. I didn't have that idea, nor have I the artistic talent to produce them, but other people have done just that.

Family Tree Ring-Binders for All of your Hard-copy Documents

Get a folder to organise your genealogy notes and charts. It will keep them secure and tidy, plus will be handy for taking to the archives.

Binder for your Genealogy

This has so obviously been designed by someone who actually has done genealogy.

There are much prettier covers on offer, but what does that matter, when they are slotted onto a book-shelf?

What leapt out at me here was the customizable name on the spine. That is the practical touch that will make all of the difference.

Every document relating to that branch of the family history can go in there. It will be instantly recognizable, when you need to recover it.

However, amongst the folders which are aesthetically pretty, this one had a touch of genius about it.

The front cover holds 48 photographs. Ideally they would depict every generation going back into ancestral antiquity. But unfortunately some of them had to wait for cameras to be invented first.

A few more recent images of your living family will fill the gaps. After all, it's the same DNA!

Your Family History Should be on the Internet too!

Invest in a folder to safely keep old family photographs, in order to stop them getting cracked and worn.

There will be photographs amongst your records. Some of these may be extremely old and already displaying signs of wear and tear. The last thing you want to do is throw them haphazardly into a pile of papers.

The majority of mine have been inherited in sad circumstances, as the original owner has passed away. I may come home from a funeral with one life-time's worth of snapshots, as I am the family historian. Once this is repeated a few times, it takes up a lot of room to store them all.

The photo albums pictured above all won points with me, because the name is on the spine. I can't emphasize enough how welcome that will be, when you want to quickly consult one during your research.

Amongst the photograph albums, this one really jumped out at me. I've always had a thing for green and black together, so that may be why.

However, I also like the chunkiness of it. It can hold up to 540 pages with Touch EZD rings, which would make it a substantial family history archive.

It also looks good. There's the stylized tree design on the front, as well as room for a photograph.

A word to the wise - if you are going to start sticking family history photographs into albums, remember to label them first!

I've been there, got the t-shirt and attended the funeral of the only person who knew who all these people were. It's better to sit down with relatives long before that point and ask them to write down who is who. The reverse of the image is a good place for that.

Happy hunting, and even happier tidying up your keepsakes!

Using Ancestry to Trace your Family Tree
I've had a love/hate relationship with Ancestry.com, and its British subsidiary Ancestry.co.uk. But this week I was desperate to get into it again!

How to Use the Internet to Research Your Genealogy
Thousands of websites exist to help you trace your family history on-line. Soon your family tree will be bursting with new leaves.
Updated: 05/04/2014, JoHarrington
Thank you! Would you like to post a comment now?
4

Personally, I think it depends what the document is. You can scan them into the computer and keep them safe there, but if the original is the only copy of an historic document, it would be a shame to chuck it out.

Plus computers can fail. It's better to have them on-line, rather than on your hard-drive, partly for that reason. But the hard-copy could easily be back-up too.

Obviously, if the paper is just a computer print-out to start with, then the impetus for keeping it is gone.

I have been researching my family. I'm the only one in the family who has an interest in it. I had been wondering if there's a need to save hard documents since we do have the computer.

Databases, like Ancestry.com, are really easy to search through too.

I do recommend genealogy. I started when I was 17 and I've been slowly working back ever since. It's really rewarding.

Don't be overwhelmed. <3 I've got some guides for beginners up on Wizzley and I'm always here to answer any questions about it. Good luck on finding your buried roots!

Great advice. Something I want to do, but feel to overwhelmed to start! Maybe this will help :) 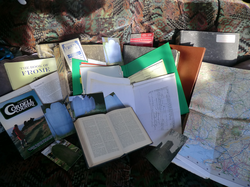