Titanic was the largest and the most expensive ship at at the time she hit the iceberg, on April 14, 1912 at 23:40. Only two hours and forty minutes later, Titanic sank into Atlantic ocean killing most of the passengers. Francis Davis Millet, American painter, was one of those who died in this horrible accident. This is reminder of life, work, and tragic death of this artist from end of 19th and beginning of 20th century!

Francis (Frank) Davis Millet was journalist, war correspondent and artist (painter). He was born in November 3, 1846 in Mattapoisett, Massachusetts. His ancestors arrived to America in 1860s on the ship from Europe. They settled on piece of land bought from native Americans.

Francis Millet became drummer boy at the beginning of American Civil War. He was only 15 years old at the time. Soon he was promoted to position of surgeon assistant. He was assisting his father, surgeon by profession. It is believed that all the blood he was working with, inspired him to paint using vivid red colors in his early artistic work.

He graduated from Harvard University in 1869 with Master of Arts degree. After that he was painting in his studios in Venice and Rome. While working in Italy, Millet probably had intimate relationship with his friend Charles Warren Stoddard. Later, he returned to Boston, to assist in painting murals in Trinity Church in this city. Millet was best known for his mural decorations.

"In the Russo-Turkish War of 1877-78, he was engaged as a war correspondent by the New York Herald, the London Daily News, and the London Graphic. He was decorated by Russia and Romania due to his bravery under fire and services to the wounded."

It is believed blood inspired Francis Millet to use vivid red color in his paintings.

Francis Millet's the Most Famous Paintings

Even though he was journalist, war correspondent, writer and translator, I appreciate the most his art and vivid colors in his paintings.

Between Two Fires is a piece of art painted in 1892 by Millet. He used technique oil on canvas to present two women and a man in a kitchen. Man as a central figure is between two women, compared with two fires. Certain Miss Green was model for both female figures in the painting. It is assumed Angelo Comarossi was model for male figure. Angelo Comarossi was Millet's regular model for male figures. But in this case, it is believed the facial expression of the male was taken from Lindsay Macarthur.

Kate Field was an actress, journalist, author and social reformer. She was born in St. Louis, but she moved to Boston when she was 16 to study at Lasell Academy. Kate was writing for several newspapers such as the Boston Post, Chicago Tribune and the New York Tribune. Field was the promoter of human rights, and she was actively working on promoting rights of African Americans. Millet was one of the famous friends she had, as well as Charles Dickens, Anthony Trollope, Robert and Elizabeth B, Browning and G. Eliot.

Francis Davis Millet served as secretary in American Academy in Rome, Italy, from 1904 to 1912. In early 1912 Mr. Millet took a trip to Rome for Academy business and took with him his good friend Major Archibald Willingham Butt.

On April 10, 1912 Millet and Butt boarded RMS Titanic in the Normandy en route to New York. His friend Daniel Burham boarded Titanic's sister, RMS Olympic in New York en route to Europe. It was planed Titanic and Olympic meet on the half way, in the Atlantic. Burham tried to send a message, to contact his friend on Titanic. That was on April 14, 1912. Wireless operator told Burham that there was no way Millet can receive message. Operator told him Titanic had an accident.

That night, at 2:40 am, Titanic sunk into the frigid water of Atlantic. Some reports of Titanic survivors are indicating that the last acts of Millet and Butt before the last lifeboats were boarded, were to insure the last women left the ship. Later, his body was recovered, and returned to Boston, where it was buried. Major Butt's body was never recovered.

Memorial to honor both Major Butt and Francis (Frank) Davis Millet was placed in the Ellipse of Washington D.C.

Frank and Major Archibald W. Butt were two of many famous people who died in this horrible accident. Read about other Powerful People on Titanic in Article by Jo Harrington.

Let it be part of you collection. Turkish Water Seller tile mural is one of the best murals done by MIllet.

Read About Other Artists from This Period:

I would love to hear from You!

Mira, I am glad you liked it. I use Wizzley to present the idea of his art. I posted link under the article, where you can see whole gallery.
Cheers!

Nice piece on Francis Davis Millet. I would have loved to see more images on the page :-)

One more interesting trivia about Francis Millet: he supposedly invented spray paint, so he is some kind of father of graffiti...
Very interesting read. Thanks!

He really deserves to be mentioned. He was multitalented man, and his paintings are just incredible. Pure art!
Greetings to your friend!

My friend is having connection trouble, so can't comment herself. She told me that she's so glad that someone has finally mentioned Millet. She says that no Titanic article ever seems to mention him, but he was a hugely important person to have sunk!

Thank you, Brenda. I am happy to see you enjoyed article and the paintings.

These paintings are great! I love painting portraits myself. Great article.

You and I agree, Davis Millet is a artistic treasure, I'll imagine you getting the perfect piece :)

Yes, Debbie, you are great writer, and that is even better! I am glad you enjoyed the article, and I am happy to see we share our love for paintings. Thank you for stopping by!

wow I love this.. the art is awesome. I wish I could paint like this. but I have my writing. lOl.. great job very good information here.
debbie 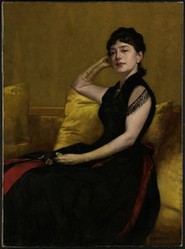