RAWR! Kids! Choose a young monster costume for Trick and Treating this Halloween - scary, furry and above all WARM in those chill October evenings.

We all know that monsters lurk in the darkest, scariest places. Teddy bears have been protecting us from them for generations!

So when it comes to selecting the best costume for Halloween events, then consider the monsters in your closet, or under the bed, or ready to pounce from the shadows. Then roar your way to success in the fright department.

But best of all, to my mind, is that children's monster outfits keep them warm out in the streets, without having to cover half of your dress up with a coat!

Will you buy Elmo or Cookie Monster for your youngster? They ARE monster outfits!

Monsters have long since been helping children learn to talk, spell, count and steal cookies.

At least they have if you include the denizens of Sesame Street and the two monsters who live there! Whether you are Team Elmo or Team Cookie Monster, there is a Sesame Street monster outfit waiting for you.

There are Sesame Street outfits to suit most ages from newborn baby to grown adult. The two pictured above are just one option for the youngest children at Halloween.

You will choose the size when you buy them. Both begin with Sesame Street costumes for babies aged 12 months old. Then continue upwards until age four for Elmo, and six for Cookie Monster. Technically the Elmo costume goes up to age six too, but it had sold out at the time of writing.

Delightfully warm, comfy and cosy, these officially licensed children's monster costumes are made from plush polyester. They look like a lot of fun waiting to happen!

Monster Costumes for all the Family at Halloween!

Halloween Monster Costumes for Adults
There's a monster on the prowl this Halloween night. Let's just hope it's you in one of these wonderful adult fancy dress outfits!

Halloween Monster Costumes for Babies and Toddlers
These little monsters are so cute that you won't want to hide under the quilt! Let your little one be the talk of the party in these infant Halloween outfits.

Monstrous outfits for Trick and Treating kids between 2-12 years old, ordered here according to age.

As you can tell from the link above, there's already a round up of all the monster costumes available for babies and toddlers. I've not repeated them here, unless an outfit continues up into pre-school sizes and beyond.

Therefore if your child is aged two or below, then I recommend you check out that page for more monster Halloween outfit ideas.  Here we'll carry on until the tweens, then halt. As much as us adults like to think of teenagers as our teeny-weeny, little baby munchkins, the real world knows they're not kids. They'll get their own collection anon.

The colorful array of monster dresses for little girls above is only a tiny sample of the full range available. They are all amazing!  Though some are better quality than others, which is reflected in the price tags attached.

From top to bottom clockwise you have:

Check the associated items for more in all of these collections.

I'm always impressed by this company's novelty costumes. They tend to be high quality and beautifully made, and this one is no exception.

Snug, warm and cute as a button!  By which, I mean scary costume for young children at Halloween! Oh yes. I'm getting nervous just looking at it.

InCharacter has a reputation for well made costumes, which will last for many Halloweens to come. Which is just as well, because monsters never go out of fashion!

The lil' monster costume here comes in three sizes - 4T to fit the average four year old; medium, for four to five year olds; and large for those aged five to six.

As a classic Halloween spooky figure, this means that it'll be good to wear for a couple of years. Then may be passed down to younger siblings, or sold on sometime in the future. When both the quality and the timeless popularity is there, these are all options not available for those costumes pandering to fleeting fads.

This child's monster costume has versions in baby/toddler and adult sizes too. In both of those categories there's a variant in pink, but that hasn't yet appeared in the kid's section.

Usually these four were chasing after ghosts, but when an ancient spook summoned a fright, the Ghostbusters took on their first monster.

I want one. I don't care that it's a Ghostbusters Stay Puft costume for children, I still want one. If needful, I'll kneel down or something.  I might be fine, I'm not that tall. Then I'll go on a diet until it fits. THIS IS ABSOLUTELY FABULOUS! It's an inflatable Stay Puft Marshmallow Man costume!  What's not to love?!

Now that the geek in me has that out of my system, I'd better run through the features. You'll get the headpiece and an inflatable jumpsuit, complete with fan to keep your kid cool.

Your kid does not have to worry about being cool. In this monster costume, your child would be cool in EVERY meaning of the word.

While all monsters by their very nature are frightening, so far they've also been quite, you know, cute and cuddly.

Now we get to a genuinely scary monster costume for kids, and another which has spooked generations of movie goers - the lurching, bandage-wrapped mummy!

(For the uninitiated, this terrifying creature is named for mummification, not the lady who gave birth to you. Not knowing the distinction can be very dangerous.)

Rising from a curse filled, long-sealed Egyptian pyramid tomb, the ancient undead Pharaoh is here to wreck revenge upon all who desecrate his sepulcher.

This is billed as a monster costume for boys, but I don't see why girls can't don it too. After all, there were some quite famous female Pharaohs too, though whether they ever rose as mummies, I can't say.

The most popular movie monster of all is that one made by Dr Frankenstein...

Halloween Frankenstein Costumes for Babies and Toddlers
Thunder crashes and lightning strikes - a hit! A creepy laboratory filled with crackling and light! But wait... What a cutie Dr Frankenstein's little monster is this time!

For mythical monster kids in small, medium or large sizes:

Dark and deadly monsters didn't originate with the invention of the silver screen. We've been telling each other scary stories since the beginning of time.

From antiquity, recorded in the Greek Classical era, we have the petrifying persona of Medusa.

By 'petrifying', I mean it quite literally. If she caught your eye, then you'd be turned to stone in an instant; not only unable to move but transformed into a new patio feature.

As the nastiest of the Gorgons (sisters who determined the Fate of any unwise enough to stray into their vicinity), Medusa famously had venomous snakes in place of locks of hair. Even if you escaped her stony stare, you were in danger from those spitting serpents!

This Medusa children's costume doesn't provide the sizes in age. But there is a wide range nonetheless. It's just a case of measuring your erstwhile Greek Gorgon, then comparing the data to the chart and ordering accordingly.

We're nearly at the end of our monster dress up ideas for kids, thus we arrive at the tweens.

Traditionally these are the kids right on the verge of their teens - ten to twelve year olds looking for something playful, but still a little grown up. After all, they aren't babies. These colorful tween monster outfits should fit the bill quite nicely.

Ok, we stretched the age range normally associated with tweens a bit, but they were covered right within it!  Let's see what you get for your money.

Which monster costume was for you?  Happy Trick and Treating all!

Halloween Vampire Costumes for Kids
Twilight, Dracula, Monster High, the blood-sucker of legend is never far away. These kids' vampire costumes for Halloween make for the best dressed spook in town.

Halloween Ghost Costumes for Kids
OoooOOOOooohhhh! Everyone knows that Halloween is the time when ghosties come out to haunt. Look the part with these Trick and Treating children's ghost costumes.

Halloween Frankenstein's Monster Costumes for Kids
Recreate scenes from Dr Frankenstein's laboratory this Halloween! With Frankenstein's monster children's costumes for an instantly recognizable horror outfit for your kids.
Updated: 10/24/2014, JoHarrington
Thank you! Would you like to post a comment now?
3

I thought so too! Much adorableness occurring here. If 'adorableness' is a real word!

These are super cute. I'll have to show my niece and nephew and see what they think of them, but I think they're really adorable.

OoooOOOOooohhhh! Everyone knows that Halloween is the time when ghosties com...

Twilight, Dracula, Monster High, the blood-sucker of legend is never far away... 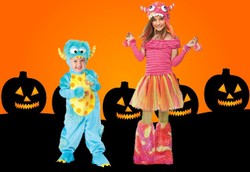 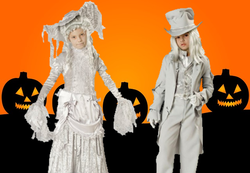 OoooOOOOooohhhh! Everyone knows that Halloween is the time when ghosties come out to haunt. Look the part with these Trick and Treating children's ghost costumes.
33%  4   3 JoHarrington
Halloween Costumes for Kids 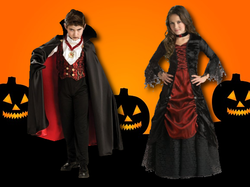 Twilight, Dracula, Monster High, the blood-sucker of legend is never far away. These kids' vampire costumes for Halloween make for the best dressed spook in town.
Loading ...
Error!