Pagan wedding rites are called handfastings for a reason. Tying the cord is when the couple are joined. Buy a cord for a handfasting, which reflects your Celtic heritage.

There is nothing more symbolic in a Wiccan wedding (or any other Pagan marriage ceremony for that matter) than the moment of handfasting.

This is when all eyes are upon the wrists of the happy couple, as the cord wraps round and around. It's when two people are united as a pair, their destinies interwoven.

Naturally any old tatty bit of string would do, but this is your handfasting day. If there was ever an excuse to splash out on something special, then you have found it. Look at these beautiful handfasting cords to check out the alternatives.

When your hand is bound to that of your partner, you could technically be looking down at a piece of unadorned twine, the belt from a bathroom robe, a bit of grimy parcel string from the back of your junk drawer or a plain cord that could otherwise be used to pull shut a curtain.

Or you could go for a beautifully crafted handfasting cord. Something that was designed for the purpose by a Pagan artist, who knew exactly what it signifies.

Call me an incurable romantic, but I know which way I'd jump.

I know that the crafter knows what they're about with these cords.  They've added 'excellent for officiant to wrap with ease' to the selling points. As someone who has officiated at many Wiccan weddings, let me tell you that this is very good to read!

You want that moment to go smoothly. Whether you buy a cord for handfasting that's festooned with pretty things or not, please do opt for something easy to wrap around the hands of those being handfast. Otherwise it just looks clumsy and causes everyone watching to wince in pity.

The Celtic Knot handfasting cords are braided ribbon with scallop ends. The silver or copper charms upon them are smaller than dimes. They'll look very pretty wrapped around the hands of the couple in union, and they each come in an Organza bag for safe-keeping.

Of course, the Celtic Knot pattern itself is highly symbolic for those who keep the old ways. The interweaving wraps together the Earth, the water and the sky; this world, the Otherworld and the Afterworld; the Maiden, the Mother and the Crone; the Warrior, the Father and the Elder.  It brings together all that was, all that is and all that's yet to come.

If you know your Celtic spirituality, then the weaving is the perfect addition to your union.

If it was my handfasting, then this would be the one. The Celtic Triquetra is so dear to me that I have it tattooed upon my back.

The Trinity appears everywhere in Celtic legends, religion and spirituality. It's one of our most deep-seated instincts to band all things together in triplicate. Whether it's the Triple Goddess, or telling ourselves that things always happen in threes, it runs as an undercurrent through our lives.

Its symbolism within the Triquetra (or Triskele) is much the same as that which I've described for the Celtic Knot.

All things run their course intertwined, only to return to the beginning in the endless cycle of life.

Your handfasting is part of a much bigger picture, and binds you within the Mysteries.

The Celtic Knot isn't the only spiritual tradition carried by Pagan Celts. The Irish shamrock was linked to the Mother Goddess long before it was attached to St Patrick.

Wherever She walked, the three-leafed clover sprang up in Her footprints. Fertility blooming across the whole of nature. What better precedent for an Irish Pagan wedding ceremony?

Shamrock has come to symbolize good luck, particularly when it's one with four leaves. For Pagans in Ireland, that is merely another way to say that the Lady has given Her blessing.

Your green handfasting cord would be fairly bubbling with symbolic meaning, if you opted for this one.  Moreover, those non-Pagan watching would undoubtedly get the hint too, if only because the shamrock's meaning is so ubiquitous!

Tree of Life Handfasting Cords for a Pagan Wedding
Tying the knot is very precisely applied in the Pagan world. Buy a handfasting cord for your Wiccan wedding, which unites not only the happy couple, but above and below as well.

Traditional Pagan Wedding Dresses
Wiccans aren't very good at being told what they can and can't wear, especially when it involves their own handfasting. Anything goes! (But especially red wedding dresses.)

Three Forms of Wiccan Handfastings
The union of two witches in marriage doesn't have to mean for life. It could be for much longer than that!

What to Expect at a Pagan Wedding Ceremony
Running around naked and sacrificing babies or virgins are two things that will not happen at a witch wedding. Read on to find out what will!
Updated: 02/28/2014, JoHarrington
Thank you! Would you like to post a comment now?
8

Yes, it is. I know quite a few Christian witches, who incorporate that Trinity very well in their circles.

Of course, the Trinity is also important to Christians, as in Father, Son and Holy Spirit. Patri, Filii et Spiriti Sancti, if my Latin is still holding up after all these years. That said, the Triquetra does look very fancy and that purple color is to die for! After all that, however, I'll stick to the silver gold 9-diamond channel set engagement ring my husband spent his last pennies on when we were engaged and the plain silver gold wedding band that matches his.

I think the trick is to just keep them. Do them even if no-one around you is doing them. Then teach your kids to do them too. That's how any tradition survives.

I just read about the martisor on a Christian Web site. There are Romanians who are conflicted about following both traditions! The martisor is very much pagan, from the time of the Dacians. Before the Romans conquered us, and before we were christianized. And yet, like many other pagan rituals and traditions, it survived -- and this one is very popular. I guess I will have to make time for it :-)

I'm really sad though that the old world is dying so fast. In the nineteenth century we had rituals for everything. Now we don't even remember them, let alone reenact them throughout the day's works -- even holidays keep very little of what used to mark them as such in the past. It's all very sad. I wish there was a way to keep the old traditions while embracing the new modes of life.

You're very welcome. And thank you for the glimpse into Romanian traditions too. I'd be interested in reading, if you were to delve further.

These cords with three colors in them are really nice. We have a tradition called martisor in spring, where the cords have two colors (white and red), for summer and winter, hot and cold, etc. Now the idea of three also comes into the cycle of human life and nature, as you say. I wonder where we might have it here in Romania in some popular tradition . . . I keep meaning to read more about our tradition, and there's never enough time. Thanks for this article! I enjoyed it :)

Oh! I'll go and have a look then. My favourite is the colour where green and black meet.

It is a little weird that purple is my favorite color (to me). It used to be blue or green, alternating, since I was little. And before that it was yellow or specifically NOT PINK when I was really little, because I liked being a tom boy XD

I'll take a pic and send it to you when I get the chance. Or it might be visible in pics of me from the second half of the trip. Now I'm all interested in hearing what you have to say about it :D

That's the one that I chose! When shall we get handfast? :D

I do love Conwy, so I'm glad that you got to spend some quality time there. You'll have to send me a picture of precisely what you bought, so I can tell you what it means. Though if you haven't taken it off, you'd think that I'd have noticed it when we're on webcam, wouldn't you? -.- I'll look out for it.

You know, I picked up a little necklace with Celtic cross work on it because I think it is pretty and because I really loved Wales (I have only ever set foot in two places and instantly fell in love with the place, and the energy it radiated, and those were San Francisco, and Wales. C: My favorite area of Wales that I've so far been in was probably Conwy.)

Anyways, it actually never occurred to me that it was a religious symbol until I read what you wrote about Celtic cross work here. I'd just taken it as a symbol of the Celtic people I guess if that makes sense (I'm now going duuuh!)

The religious context may explain some of what I thought were funnier customer interactions I've had at work recently (where I sell herbal medicinal remedies). Because I couldn't figure out why they'd assume I'd know anything related to what they were asking about. Because, it could just come with the trade that there is a good chance I might've known, and then I was also wearing a necklace with Celtic cross work on it. >.>

I am not contemplating if I should feel strange about wearing it constantly, because I've actually not taken it off since I first put it on LOL

Tree of Life Handfasting Cords for a Pagan Wedding

Tying the knot is very precisely applied in the Pagan world. Buy a handfastin...

For centuries, Welsh women have got the message when presented with a hand-ca... 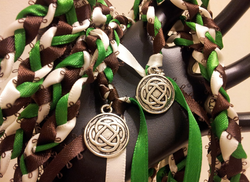 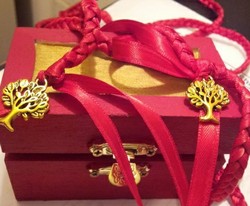 Tree of Life Handfasting Cords for a Pagan Wedding

Tying the knot is very precisely applied in the Pagan world. Buy a handfasting cord for your Wiccan wedding, which unites not only the happy couple, but above and below as well.
100%  43   26 JoHarrington
Pagan Ceremonies

For centuries, Welsh women have got the message when presented with a hand-carved wooden spoon. It means he's very interested indeed.
Loading ...
Error!