You want to know if the shirt you are planning on buying was made in an unsafe sweatshop; there’s an app for that called Buycott.

The death of 1,100 workers in the collapse of a garment factory in Bangladesh in April 2013 heightened awareness of the appalling working conditions in some developing nations. Consumers in the developed world were shocked at the exploitation of people making the cheap goods they snap up at chain stores. Most large retailers operate through middlemen and so distance themselves from responsibility for unethical behaviour in their supply chain. A new smart phone application called Buycott uncovers the trading connections and helps consumers make choices in line with their values. It is so popular that it is now on Apple’s list of top free apps. The developers have been a bit overwhelmed by the response and servers have crashed because they weren’t set up to “handle 10+ new users every second.”

Help for the Socially Conscious Shopper

Marketing campaigns never tell us much about the origins or contents of the products we are urged to buy; we only learn about the wonderful ways in which our lives will be improved once we make the purchase. 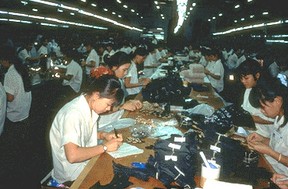 Often, consumers don’t even know which company produces the goods they are buying. Now they can trace who’s behind the soap, cereal, fashion line, and many other items they prefer.

Buycott was developed by Los Angeles-based programmer Ivan Pardo who spent 16 months researching the family trees of corporations for the app’s database.

Scan the bar code on a box of Splenda and your smart phone screen delivers the information that it’s made by McNeil Nutritionals, which is owned by Johnson and Johnson.

One of the features of the app is that users can create their own campaigns to support or avoid certain companies. Developer Ivan Pardo told The Globe and Mail (May 2013) that users are “able to scan a product and check ownership against campaigns they’ve joined. If the app finds a conflict, it will alert you.” 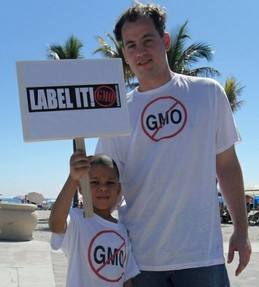 One such campaign involved the call for labelling food that contains genetically modified organisms. The “Demand GMO Labelling” listed the companies that donated $150,000 or more to the effort to defeat a proposal to identify food containing genetically modified ingredients.

Writing for Salon (June 2013) Andrew Leonard noted that “By using the handy-dandy barcode reader in Buycott, I learned today that Nabisco had donated $1,950,500 to the effort to defeat California’s GMO labelling initiative.”

The list of other companies opposing GMO labelling includes most of the consumer product giants: Heinz, Coca-Cola, Nestle, Kellogg’s, Kraft, Unilever, and the huge agriculture corporation Monsanto. So, there’s little choice left for people who want to buy GMO-free food; but, nobody said socially responsible shopping was easy.

It isn’t just lefties, environmentalists, civil rights activists, and their fellow travellers who have make use of this app. There is a (now outdated) campaign to “Boycott Contributors to Obama 2012 Re-election.”

And, then there’s the “Avoid Koch Industries.” To non-Americans that may not sound very political, but it is. Charles and David Koch are Kansas-based billionaires who have contributed vast amounts of money to conservative political candidates and lobbying groups. Deeply involved in the oil industry, the Koch brothers have spent tens of millions of dollars funding climate change deniers. 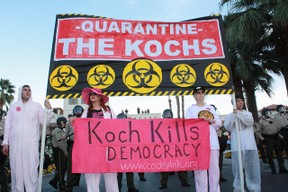 In an August 2010 article in The New Yorker Jane Mayer wrote that “The Kochs are longtime libertarians who believe in drastically lower personal and corporate taxes, minimal social services for the needy, and much less oversight of industry - especially environmental regulation.”

The Koch brothers funded the 2012 candidacy of Herman Cain who sought the Republican Party nomination for president until he flamed out over allegations of sexual misconduct.

However, a sense of the political leanings of Buycott users can be seen from the fact that almost 60,000 people belong to the anti-Koch group while the anti-Obama one gathered only 546 followers.

As someone who doesn't have an i-thingy I suppose I'm not really qualified to write this article. But, I see the app as a useful additional tool to the many available that help us cut the ties to corporate domination.

The cases you present are really interesting as are the videos you included in your article. It is also interesting to see technology suited to buycott corporate interests but, as catana said, there also many other ways to do so. 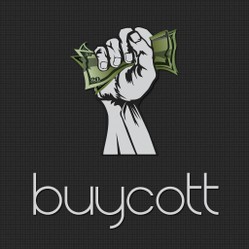 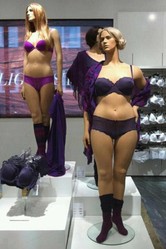 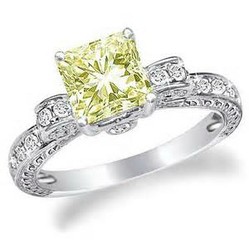