Ideas for Images to Use in Your Zazzle Store

If you have a Zazzle store, you are likely to have periods when you run out of inspiration for images for products. Here are some ideas and resources for your store.

If you have a store on Zazzle, the print on demand site, you will quickly realise, that like most internet marketing, making money there is a numbers game. True the images that you put on products have to be of high quality and original, but to compete with the millions of products there, you also have to upload a lot of them. No matter how resourceful you are, there is always the danger that you will run out of inspiration for new images to upload.

I first joined Zazzle with the idea of putting the photographs of my pet frogs and geckos to use. However, for reasons that I still fail to understand, my frogs just didn't seem to be that popular. People really prefer pictures of cute kittens and puppies to amphibians! But I was hooked on using the site, and I decided that I simply needed to expand my horizons and try different topics.

To Succeed on Zazzle You Need Hundreds of Images!

Running Out of Inspiration is Common

Finding ideas for the hundreds of images you need to fill your store with enticing products is not easy.  I was very proud of my unusual cold-blooded pets, but there are only so many photographs you can get from 4 different species.

I soon realised that if I was going to find enough pictures to make an impression amongst the millions of products already on the site, I would need to find different sources of images.

Why do People Not Appreciate Reptiles?

The Power of Layers 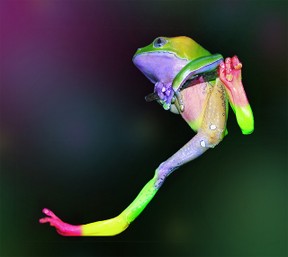 I was lucky in that I already had Photoshop installed, a leftover from the days when I used it for work.  I quickly discovered another side to the program, which I had so far only used for editing photos.  By overlaying an image with a new layer, on which I daubed various digital paints, and testing out different functions in the layers menu, I could produce bizarrely coloured photographs. One of my first effects was my psychedelic frog.

Unfortunately this was no more popular than the "normal" giant waxy monkey frog that I had previously uploaded.  What is it with people?  Either they are not interested in frogs at all, or all they want is the famous red eyed tree frog.  Ok I admit the RETF is very cute and iconic, but don't people want something different?  I've never kept it, precisely because it was so famous.  Do you know that my tree frog, Phyllomedusa bicolor produces psychoactive substances that are used in shamanic hunting rituals in its native Amazon forest?

I also discovered the "Hue" adjustment slider in the Photoshop menu.  This is very useful in altering the colours of various everyday objects.  A blue "flower" produced from the photograph of half a grapefruit, was my first Zazzle sale!

Incidentally, I've never used it, but I believe Gimp can do most of the things that photoshop does.  And it is free!

My Pop "Art" on iPhone Cases

Making Fruit and Flowers More Interesting with Some Photoshop

Make an Abstract Image From a Few Colourful Circles 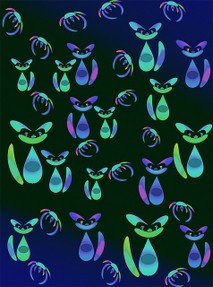 The various filters that come with Photoshop also provide many opportunities for creating interesting images.  I've never considered myself particularly artistic, but now I enjoy what I would call "digital doodling".  The "polar co-ordinates" filter is particularly fun, it is quite amazing what you can achieve with a few coloured circles.

One day while "doodling" I realised part of an image looked a bit like a cat's head.  I quickly found some other parts that would work as a body and a tail, a little bit of copying, pasting, and resizing, and I produced the "funny cats" picture on the left.  Some strange flying creatures moved in with the cats, I interpret these as an alien species of flying crabs.

In the meantime, I noticed these amazing images of animals, that seemed to be drawn out of glowing lines.  I think I first spotted them on pinterest.  A short investigation revealed that they were created with a filter called fractalius.  You actually have to buy this, assuming you are a law-abiding citizen.  The whole point of using Zazzle was to make money rather than spend it, but I just couldn't resist.

I have not yet sold any fractalius pictures on Zazzle, but recently somebody bought my flamingo on CafePress.  I got back 10% of my fractalius "investment" from that purchase.

I especially like using fractalius on public domain images from sites like pixabay.  Although these images are free to use, they are available to any seller on Zazzle.  Adding my own effects ensures that I don't end up with the same images as another store.

Don't Have Photoshop Yet?

There are Several Free Fractal Generators

I quite got into making "abstract art" for my Zazzle store, even though I don't think it sells as well as other images.  However, different effects with Photoshop were somewhat restrictive after a while.  I'd always been fascinated by fractals, and I decided to investigate how they were made.

It turns out that there are freeware fractal generators out there.  I keep working with Apophysis, with not quite satisfactory effects.  Either I am not patient enough moving those pesky little triangles, or there are still secrets to using the program that I haven't learned yet.

I do, however, love using Sterling2.  Again this is "digital doodling", try different combinations of formulas and renders, zoom in on the image, and see what happens.  The one negative of using the program, is that there doesn't seem to be many tutorials for it.  I've recently recorded how I use Sterling to generate fractals.

Fractal art has caught my eye. When I eventually get to Zazzle, I'll have to have some of that. Thanks for writing this article!

Patterns are great, liked the images. Photoshop can be really useful.

Your designs are stunning, anitalite! And being a "pro-seller" after only a few months is actually quite a feat. I'm off to check out your tutorials. Thanks for posting the link.

Thanks Peggy and Sheri! Sheri, I have a couple of video tutorials demonstrating how I use sterling2 and apophysis (which I've finally found some ways to make work) on HubPages. I don't know if they are very good, they are my first video posts, but if you find the programs overwhelming (which I think everybody does at first), maybe they will help you. I think I've linked to the sterling2 hub above.

There are a lot of apophysis tutorials, although I haven't found the ones on youtube very helpful, the written ones are really good, but they are harder to follow I think.

I love these ideas you describe here. When I am up to it I will get back to trying to work with layers and fractals. I was quite overwhelmed by the fractals programme but I so like your designs that you are inspiring me to try again.

Great tips for expanding your normal photos. I'd never thought of doing this.

Yep Hollie, well a lot of the fractals are floral, so I also put that in and flowers, but I think flowers are quite competitive. I have so far sold a fractal sticker, so all is not lost!

One piece of advice I've seen given to sellers of "abstract", is to have a variety of things in the store, so people are attracted by other products, but they see the fractals, and if they are not particularly attached to the idea of having a "cute owl" on their product, then maybe they will actually like the fractal enough to buy it. We shall see!

Honestly, I think we're disadvantaged being in the UK, because

I find it so difficult to describe and tag fractals and digital art. I mean, I know they say describe the shape and colours, try to match what the searcher is looking for, but how many would say; geometric shapes emerging from the centre and spiraling out. They just wouldn't would they? So, I think when it comes to fractals, most are just using synonyms of the term and then maybe colors. Perhaps more articles and blogs are the way forward for some of your lovely designs to be found- Once purchased, they'll gain more exposure. Though in all honesty, I have no idea what the answer might be.

Thanks for your advice Dusty. I think you are right about me needing to make more template products. I make them customisable, so people can add a name to an iPhone case if they want to, but the casual Zazzle user might not realise they have that option.

Having said that looking at cases listed by popularity, which I assume reflects their sales, most of them are not templates either. But I suppose I should try it.

What is somewhat annoying is that I sold my first item in September, and then had a few sales after that. Christmas was pretty good (for a beginner) as well, which is not unexpected, but then it all really dried up. Obviously I don't expect to make as many sales as I did in December, but .......

I actually suspect that fractals and abstracts are not that popular, people are more likely to search for "owl" or "cute cat" rather than 'fractal".

You may think that people just don't like what you have when your real problem may be lack of promoting the items. If no one sees what you've made then they will never buy it, no matter how cute and adorable it is.
Having lots of images to sell is not nearly as important as doing a good job presenting them, making unique and customizable products and promoting your work - like on this page. But none of what I see here has a template of any kind, and many of Zazzle's customers are looking for items to personalize. I'm just offering friendly advice.
I like your fractals - I have no idea how to make those.

Use Polyvore to Display Your Products to Advantage

You are selling your designs on Zazzle, Etsy or other online shops. Help shop... 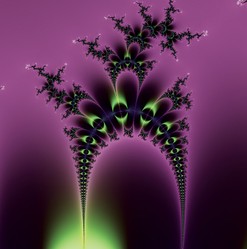 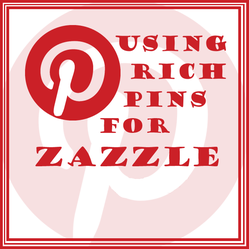 The new RICH PINS offered by Zazzle helps you market products much more successfully. Now you don't need a blog or website to do well.
100%  17   12 Sheri_Oz
Zazzle Sellers and Tips 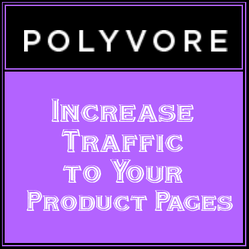 Use Polyvore to Display Your Products to Advantage

You are selling your designs on Zazzle, Etsy or other online shops. Help shoppers find you more easily by using the display features of Polyvore.
Loading ...
Error!