The Imaginext Samurai and Ninja range of toys is one of the latest editions to the range. Contract the Samurai battle combat with the more subtle Ninja style.

The Imaginext Samurai and Ninja range of toys is new from Fisher Price. It taps into the interest that lots of kids have in Ninjas and dragons.

This is a very cool range for kids aged 3 to around 8. The Imaginext Samurai Castle is very cool and has lots of interesting things for kids to trigger.

This range makes a great Christmas gift for little boys particularly. This will keep them entertained for hours!

The castle itself has a very obvious eastern look to it and is packed with things to do that will keep little kids happy. Kids will be able to pick up the castle and move it from room to room.

The castle has a fun secret entrance that it opened by turning the Samurai statue, and there's a secret revolving door too. The giant mouth opens too and there's a cannon that fires projectiles. The Imaginext range is brilliant for including lots of actions that kids can trigger. And they are easy to do as well - often by placing the figures and turning them.

A neat feature is a zip line that the figures can slide along - between the main castle and the tower. And there's an area where you can place a Ninja and Samurai warrior and move a lever to make them battle.

You get a Ninja and a Samurai figures with the castle and lots of accessories for them including armor and weapons.

You can see the Imaginext Samurai Castle in action in the demo video below.

This range is all about the different approach taken by the Samurai who are ready to go into battle, and the Ninja who prefer to be stealthy and avoid major battles if possible.

This set includes a Ninja action figure and a Samurai action figure. They each have weapons and armor and a flag.

The figures are compatible with the Imaginext Samurai castle.

Oh yes, there are dragons too! This Imaginext Samurai Dragon Wagon is used by the Samurai and comes with a Samurai figure.

Don't you just love the name Dragon Wagon! This golden dragon is kitted out with armor and weapons, and someone for the Samurai to ride. Pull the dragon's tail down and his neck will launch forward to attack or scare off enemies.

Pop the Samural on top and turn him to reveal the hidden cannons! Press a button to fire them.

The set also includes armor and swords for the Samurai warrior.

The Imaginext Ninja Glider is very cool. There's usually some kind of flying vehicle in any Imaginext range, and this one is certainly imaginative!

The wings open out on this glider and one Ninja figure acts as pilot while the other can hitch a ride by grabbing a pulley at the back. The set comes with two Ninja figures and their weapons.

The glider has two dragon rockets to fire at enemies.

The Ninjas also get a dragon in this range. This black and green dragon has wings which move when you push a button and the head lunges too.

You also get a Ninja figure and his weapons.

Both the Ninja and Samurai have a mounted warrior in this range. The armored horses match their riders.

There's a black Ninja horse comes with a Ninja figure, his armor and some impressive weapons.

And there's a white Samurai horse which comes with a Samurai archer and his bow and arrow.

You can watch the Imaginext Samurai Half Staff video below to get the story of the Samurai and Ninjas and get some ideas to act out with the toys. 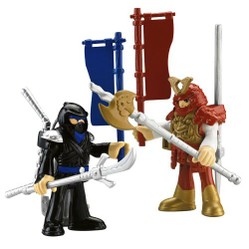 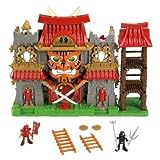