The new Lego Friends range has created a lot of controversy. Are these cool Lego sets for girls, or stereotype enforcing toys to be avoided?

The new Lego Friends range has received a lot of negative press attention. This new range of Lego is aimed specifically at girls.

It features Lego sets including a Cafe, Fashion Design Studio and Dog Show. Rather than the traditional minifigures, the Lego Friends sets feature molded girl figures. The girls look like tweens - older than or the same age as their target audience of 5-12 year old girls.

The Lego Friends range is accused of featuring primarily stereotypical girls professions rather than a balanced range of careers and being too pink and fluffy.

Let's take a look at the range and see what we think. 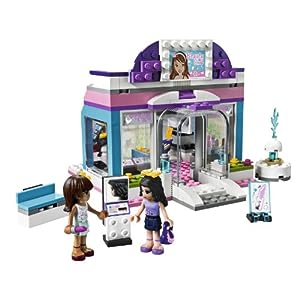 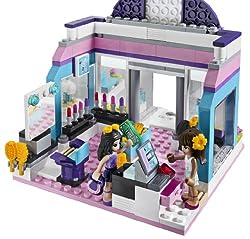 So here's one of the Lego Friends sets that's drawing criticism. It's a beauty parlor and there's definitely pink involved!

This set is aimed at girls age 6-12 and there's a good bit of Lego model building involved in setting up the salon.

You also get two Lego Friends figures and lots of beauty related accessories.

Stereotyping? Well I think you need to look at more of the range before drawing any conclusions. 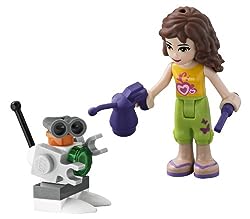 The Lego Friends Olivia's Inventor's Workshop is another set in the Lego Friends range. Nothing stereotypical about this one except maybe a touch of pink.

This is a very cool set full of science kit, tools, a chalk board with math equations on and a very neat robot.

Oh I would have loved this set as a girl! But you could argue that this is a small set compared with the beauty shop. So let's look at some more sets so you can get a feel for the whole range.

Do we Need Lego for Girls?

So do we need Lego sets specifically for girls? Can't they just play with Star Wars Lego and Lego City like the boys?

Well yes, they can and they should. When I was a tween (not that the term existed then!) I would have loved the upcoming Lord of the Rings Lego range. I would have been so happy to get that and be able to reenact scenes from my favorite books. No one would have bought it for me though, because it's a boys toy. Grr.

One of the problems is that most physical and online toy stores are separated out into girls toys and boys toys. When people are buying gifts they tend to head to the gender appropriate section. And toys are usually marketed to either boys or girls.

I think it's good to see Lego making a clear statement that Lego is for girls as well as boys.

Also you have to be realistic about what most young girls are interested in. I have two nieces and they are inexplicably drawn to pink and lilac even though their parents have not encouraged this at all.

It's all very well saying that girls should play with auto mechanic sets and city trader sets. But would they actually want to!

What do you think of the Lego Friends range?

It is SHIT it a terrible show all you lovers I'm so sorry but its the n word all over it.

Hmmm.. I guess that as a toy, it doesn't offend me. :-)
But I do see your point. It seems to water down the whole spirit of Lego to have these girly sets.

I personally like the Lego Friends although I prefer them now they are less stereotyped. The beauty shop was a bit disappointing but they've made more interesting sets now. It is just an interesting addition to the Lego range and may encourage parents and grandparents who wouldn't otherwise have thought of buying Lego for girls to buy a fun and educational toy for their children! I don't like the TV series that features the Friends, it's better for kids to make their own characters and stories, and in places the series may actually undermine girls confidence and ambition.

Its cute, but would I buy for my girls? Probably, I just love all the pink stuff and yet I played with the regular lego and would love them to do that too. Probably get both!! I am in the middle but will go with 'Love it!' because it is cute, if stereotypical.

There's part of me that doesn't quite get why girls wouldn't want to play with Lego Star Wars and Batman sets more than beauty sets and cafes. But I'm a geek and an IT professional.

I'd rather girls were bought these Lego sets than no Lego at all. Building Lego models and following the instructions is actually a great start for a technical career path.

I don't think Lego on its own can steer girls away from pink and purple. (OK I admit it, I like purple, and purpley-pink.)

The Lego Friends Inventor step is a small step in the direction of introducing girls to less stereotypical careers. And being a vet is a pretty impressive career for girls to aspire to (my female vet friend is doing very nicely!) Hopefully we'll see more sets along those lines in the future.

Lego that Girls will Enjoy - Not Just Lego Friends
Are you looking for Lego that girls will enjoy? Yes, lots of girls love Lego. We've found lots of cool Lego sets featuring girl characters. And yes, there's Lego Friends too.

What Lego Friends Sets Would You Like to See?

I don't have a problem with Lego sets that are girl friendly, but I do think "beauty salon" types of sets are in poor taste for young girls. Girls have a hard enough time resisting the pressure to focus on their physical appearance as the symbol of whether or not they are "okay" as a person. Marketing to girls seems to get stuck on glamour rather than teaching girls to value the beauty that is within them.
I'd like to see more occupational types of sets. Even sets that celebrate friendships and family life are okay -- just not Barbie doll wannabe Lego, please! 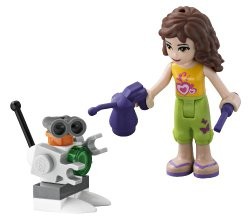