Described by The Guardian as “debonair, adventurous journalist, commando, author, and playwright” Michael Burn was a man of many talents

Michael (Micky) Burn was born in 1912 in London to a family that was well-connected to royalty and the upper class. As a member of Britain’s exalted elites he received a top-quality education at Winchester College and Oxford University. But he only spent a year at Oxford, avoiding lectures, tutorials, and any of the work that usually goes along with getting a degree. But if writing essays was not to his taste, writing for a living was.

The Great Depression changed a lot

Many young people dabbled in radical politics during the misery of the Great Depression; Micky Burn was among them.

The old ideas had produced the hardship of the 1930s and were unable to cure the new problems. Obviously, a different approach was needed and it seemed to Burn and many others of his generation that Adolf Hitler had found one that worked. 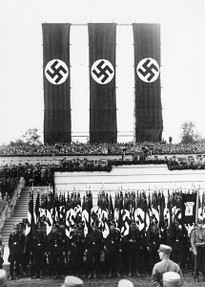 He visited Germany in 1935 at Hitler’s invitation and attended a Nuremberg Rally (left). He met the Führer and was impressed. He wrote home that “It is so wonderful what Hitler has brought this country back to.” But, the scales of self-deception fell from his eyes when it became clear to him that Hitler was not an agent of benign social reform but an agent of destruction.

In 2008, he told The Times “I am ashamed I was taken in for a short time by National Socialism. What made me sympathize was that there were two million unemployed in England. I had seen it in the coalfields and it sickened me. I thought anyone who cures that was a good person...”

Back in England, Micky Burn was hired by The Times and began a long career in writing. Seeing that war was inevitable, Burn joined the army and, eventually, volunteered for the commandos, a unit of elite soldiers created by Winston Churchill.

A daring and almost suicidal attack

In 1941, the German navy took delivery of the Tirpitz, the biggest battleship in its fleet. Aside from its home base, there was only one dry dock big enough to carry out repairs and maintenance to the vessel, and that was in St. Nazaire, north-western France.

The British decided to destroy the dock and cooked up a plan to ram an old destroyer, HMS Campbelltown, loaded with a massive time bomb, into the dock gates. Burn and the two dozen men under his command were to attack gun emplacements.

As he scrambled ashore, Capt. Burn was wounded but carried on to his objectives. He was captured and interrogated. While he was being questioned, the windows of the building he was in were shattered as the explosives aboard the old destroyer went up; the dock gates were completely demolished. 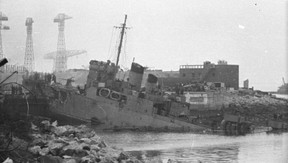 The image at left shows HMS Campbelltown wedged on the dock gates at St. Nazaire, with German souvenir hunters posing on her bow. When she exploded bits of these men were found hundreds of metres away. They were among the more than 360 German soldiers who were killed in the raid.

The operation cost 169 British commandos and sailors their lives; a further 215 men were captured. Micky Burn was awarded the Military Cross and five others received the Victoria Cross.

The Tirpitz was denied its Atlantic base and remained bottled up in a Norwegian fjord until it was sunk by Royal Air Force bombs in 1944.

The Greatest Raid of All

Jeremy Clarkson tells the story of the St. Nazaire attack

Locked up in Colditz Castle

Captain Burn was marched off to spend the rest of the war as a prisoner, eventually in Colditz Castle in Germany. The castle was a special holding place for prisoners thought to be an escape risk.

In Colditz, Micky Burn’s political sympathies took a significant lurch to the left. He found much to admire in communism and, according to an obituary in The Independent, “he had driven some of his senior officers, notably Wing Commander Douglas Bader, crazy with his Marxist theories.”

While a “guest of the German Reich” Micky Burn received a Red Cross food parcel from an unknown donor. It turned out the sender was a Dutch woman, Ella van Heemstra, who had met Burn in England and had seen film of his capture in St. Nazaire.

After his release at the end of the war, he learned that Ms. Van Heemstra was staying alive by eating tulip bulbs and that her daughter was dangerously ill with disease brought on by malnutrition. He sent her hundreds of cartons of cigarettes, which were valuable currency in post-war ravaged Europe. Ms. Van Heemstra sold the smokes and used the money raised to buy the penicillin that saved her daughter’s life. That child grew up to become Audrey Hepburn.

Turned Towards the Sun

Trailer for a documentary about Micky Burn

After the war, Micky Burn returned to The Times and was sent to cover Eastern Europe from his post in Vienna.

That’s where he met his wife, Mary. Although Micky Burn was bisexual, the marriage was a happy one and lasted from 1947 until Mary’s death in 1974. An obituary in The Guardian noted “His sexuality caused him great anguish but he was able to write about it with a light touch. Mary knew of his homosexuality, considering it ‘a part of a general male retardation’ he reported…”

The Life of a Writer

From journalism to fiction 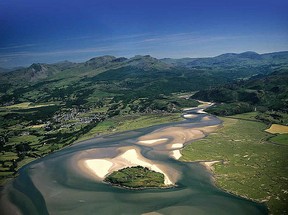 By the early 1950s, Burn had had enough of the world of the foreign correspondent. He and Mary settled down to a quiet life in rural north Wales in a modest home overlooking the Dwyryd Estuary (right). He wrote plays and, as noted by The Independent, “nine books of non-fiction, four novels, six books of poetry as well as his autobiography, Turned Towards The Sun (2003).”

Also in Wales he took a stab at entrepreneurship as reported by The Telegraph: “In the 1960s he ran on communist principles a mussel-farming co-operative in north Wales, a venture that proved financially disastrous as he insisted on turning all the profits over to his workers.”

The Guardian describes his autobiography, which is now out of print, as a reflection of his personality, “intelligent, modest, painfully honest, dryly witty, courageous, highly principled, and unfailingly urbane.”

“Captain Micky Burn: Soldier who Led the Commandos in the ‘Operation Chariot’ Raid on Saint Nazaire in 1942.” Phil Davison, The Independent, September 7, 2010. 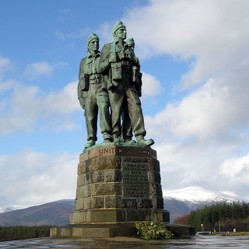