Nautical paperweights are a great desk accessory, whether you want to add a personal touch to your space on the job, or your home office. They also make nice display pieces.

My mom collected paperweights, and I still have many from her collection. What I need is a few more nautical paperweights to add to those I have.

Some of nautical paperweights I've been searching through to find my next acquisition are shown here. I've come across some attractive and unique ones. Maybe some are ones you'll be proud to display on your desk or anywhere in your home for decorative accents.

Nautical decor is a blast to use to decorate rooms in your home or office! These nautical paperweights will add a nice touch of the sea anywhere they are placed. They can even be used as decorative accents on a shelf or side table.

Mermaids - The Stuff of Sailors' Dreams

Mermaids Continue to Capture Our Imagination

Mermaids have appeared as artistic themes for centuries.  Mermaid statues are often built at harbors and other places frequented by sailors.  One of the most famous ones is the statue of The Little Mermaid in Copenhagen.  It memorializes the Hans Christen Anderson fairy tale by the same name.

These half woman, half fish creatures often fueled the dreams of ancient seamen.

Through the ages, there have been claims that they actually exist, though none of the claims has been substantiated. Still they remain part of our fantasy, and today are a popular subject of cosplay.

Due to their continuing appeal,,mermaid paperweights are widely available, with cast iron being one of the most popular materials for these lovely creatures.

In Acrilic or Iron

Anchors Are A Universal Nautical Symbol

They are Recognized Everywhere

They Have a Lot of Meaning

Why do so many people count the classic anchor as their favorite nautical symbol?  Perhaps it's because it's so universally recognized as an essential part of life at sea.  It's been that way for generations.  But it also represents steadfastness, faithfulness, and safety.

Whatever the reason, that classic configuration, like the one shown in the above photo continues to have wide appeal. That particular design is called the Admiralty Pattern.

However, the Admiralty Pattern anchor wasn't the first thing used to keep a boat from going adrift.  Nor is it the only design used today.

Today a number of designs are used.  Some of them are variations of the classic Admiralty Pattern.  Others bear little resemblance to it.  One style looks like a giant upside down mushroom!

Nevertheless, if you want something nautical for your desk, chances are you'll gravitate towards some representation of the classic anchor.

Anchors to Weigh Down Your Paperwork

Include Sailboats, Lighthouses, and more

There are many choices in themes for a nautical decor.  if you just want an accent here or there, then small items, like a paperweight or business card holder is easy add.  Here are some of the types of things you might consider when looking to add a bit of nautical flavor:

My mother had a collection of paperweights, mostly ones made of glass. I still have some of them. The one shown in the above photo was one of hers, and I believe it's over 80 years old. They make a lovely display.  Some are in my china cabinet, and others are set out on one of the selves that is built in to our den.

Paperweight collections are still popular with some people.

Are you one of them?  (A poll follows)

Do You Collect Paperweights?

Or Do You Know Someone Who Does?

Other Pages about Nautical Decor

Lighthouse Nautical Bath Decor
Bathroom Decorating ideas with a lighthouse theme. They've represented safety to generations of mariners. Bring these beacons of hope into your home

Nautical Yard Decor: Sailboats
Add a spirit of nautical adventure to your life with outdoor sailboat decor, whether you're a regatta spectator or as adventurous as Joshua Slocum.

Nautical Kitchen Accessories
Suggestions for kitchen accessories especially for those cooks with a nautical bent. Bonus: A little bit of nautical trivia to impress your seagoing buddies.
Updated: 03/29/2017, CruiseReady
Thank you! Would you like to post a comment now?
8

Yes, we all love Mom's paperweights. I've passed a couple on to my daughter already, and she is proud to have them.

CruiseReady, Thank you! The paperweight from your Mother is lovely! Your collection must be quite a treat for family and friends during holiday celebrations.
The knots, spyglass, and wheel themes sound particularly cooperative with classic and contemporary settings.

Awww, thank you so much. And sorry you can't be in S Florida right now. Weather is so nice there. (and here in the central part of the state, too)

OMG! Is that too-cute adorabl-isious (I made that up) blown glass turtle paperweight to die for? I love blown glass and if I had my way, I would be wall-to-wall with it! I miss South Florida SO much . . .!

I am tempted to get one of the anchor ones myself!

I like the seashell paperweight that you have here the best. My grandmother used to collect paperweights.

This is a really lovely collection of collectible paperweights. Any of these would look really good out on display and make great gifts for someone who loves this nautical theme.

Collecting paperweights is a nice hobby. I have to say I love the one with the shells that is part of your mother collection, the mermaid ones are nice as well!

LOL Yes, that woiuld be for the desk of a giant, I guess.

Lighthouse Jigsaw Puzzles for everyone from tots to grannies. Find out why pu... 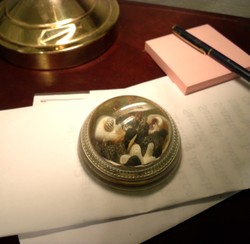 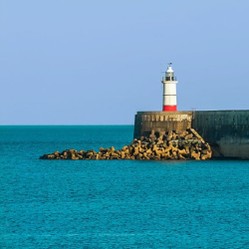 Lighthouse Jigsaw Puzzles for everyone from tots to grannies. Find out why puzzles are good for you and learn some cool lighthouse facts, including which is the tallest in the U.S.
69%  8   6 CruiseReady
Pillows and Throws

Sea birds are a beautiful element in a nautical or coastal decor, and throw pillows are one of the easiest ways of all to incorporate their natural beauty into your own decor.
Loading ...
Error!