My honest review of the Omega VRT350HD including pros and cons, best prices, features and more. This juicer is not for everyone... 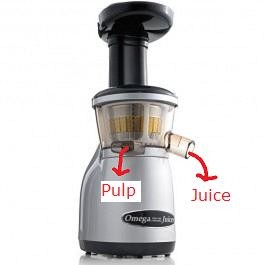 To start off with, you'll notice that this Omega juicer is an upright model, which makes it look a bit like a centrifugal juicer. However, it has two exit valves, one for the pulp and one for the juice, unlike a centrifugal juicer. Because of the upright design this Omega VRT350 takes up very little space and is small and stylish enough to leave out on the countertop if you prefer to do so.

Of course, the biggest reason why the Omega is so popular is simply because it makes such great juice. Juices taste good and due to the juicing process enzymes are intact and there's very little oxidation - so that the juice produced is incredibly dense in nutritional value.

And of course, it's also a very efficient juicer - the pulp remaining behind is very dry. Which means that almost all the juice has been extracted - with the cost of organic produce, an efficient juicer that doesn't waste food is very important.

Here is what the manufacturers have to say about the Omega's juicing process: (source: http://www.omegajuicers.com/juicers/vert350-juicer.html)

The Omega Vert VRT350 Juicer is a revolutionary product that features the high efficiency of a masticating style juicer in a vertical design. The Vert is designed to be compact, contemporary and productive. Most juicers process at a speed of 1,650 to 16,000 RPM, destroying many healthy enzymes and causing juice to degrade shortly after being extracted. The Vert VRT350 Low Speed Juicing System processes at 80 RPM, preventing oxidation and allowing juice to be stored for up to 72 hours without degradation.

Here's a quick list of the most important features of the Omega VRT350HD:

As mentioned above, the Omega VRT350 has a pulp controlling screen, so that you can choose how pulpy your drink is. This is extremely useful if different people in your household prefer different levels of pulp in their drink, or if you want a pulpy drink sometimes but a less pulpy one at other times. 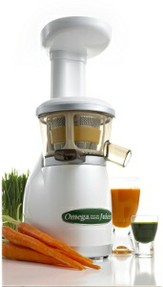 There are very few juicers capable of producing wheatgrass juice, and the Omega is one of them. However, people who drink mainly green juices say they prefer the J8006. If you plan on making mostly fruit and vegetable juices, with only the occasional wheatgrass juice, then the Omega VRT350 is better suited for your needs. However, if you plan to mainly juice wheatgrass, then you could check out my Omega J8006 review.

Another nice thing about the VRT350 is its self-feeding mechanism. Many masticating juicers require you to constantly push down the feed - with this machine I've found that I hardly every have to use the plunger. 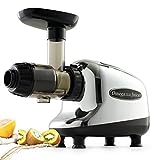