Plastic pollution of the oceans and the Great Pacific Garbage Patch

Plastic is a serious threat to marine life and the environment. It is killing an alarming number of sea-birds, turtles, whales and other sea creatures and entering the food chain.

Indeed, plastic pollution is a very serious threat to sea creatures.
Plastic is something we all use and so very many things are made of it or packaged in the material, but unfortunately a vast amount of it is getting thrown away in an irresponsible way and is becoming an ever greater danger to the environment. Plastic bags blow about and litter the countryside, plastic bottles and other objects wash up on the tides having become part of the flotsam, landfill sites contain increasing amounts of plastic.
But perhaps something a lot of people don't realise is how dangerous to wildlife the plastic that pollutes the sea is. Marine turtles, many of which are already endangered, mistake plastic bags bobbing about on the waves as jellyfish, and if they swallow them they can die because the plastic cannot be digested and can block the poor animals' digestive systems. A similar thing happens if sea birds mistake plastic items for food and feed this junk to their chicks.
I have actually seen examples of this at a gull colony on the Island of Flatholm in the Bristol Channel off the coast of South Wales. Gulls scavenge rubbish tips on the mainland and bring food back for the baby birds. I saw plastic toy fried eggs, bits of broken plastic dolls and other toys as some of the stuff the parent birds wrongly identified.
If the chicks swallow this rubbish it can kill them just like the turtles. Rare and already endangered marine birds like many of the albatross species can fall victims to this. 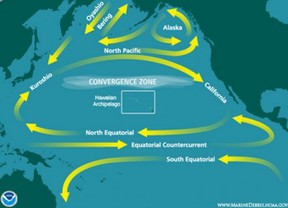 There exists an area in the oceans known as the Great Pacific Garbage Patch, the Eastern Garbage Patch and the Pacific Trash Vortex that has been created by the accumulation of plastic and other debris carried on the currents and held there in the North Pacific Gyre. It is so big that it is said to be nearly twice the size of the state of Texas.

As some of the plastic disintegrates over time and smaller particles of plastic become smaller still they eventually become small enough to be eaten by marine life and thus, in turn, are eaten by larger animals and so it enters the food chain.

Meanwhile worldwide very tiny granules of plastic are becoming a constituent of sand.

Another problem floating plastic in the sea can cause is it can be used as a base for some invasive species to attach to and then get carried to other parts of the world on the tides.

So how does all this plastic get in the sea to begin with? People carelessly throw plastic litter on beaches. Others throw plastic refuse out of boats and ships. More plastic debris washes down the rivers and into the sea. Wikipedia says that 80% is from land-based sources and the remaining 20% is plastic thrown away at sea.

In 2009, adventurer and environmental campaigner David de Rothschild sailed a raft called the Plastiki built from plastic bottles on an epic voyage to raise awareness of the problem of pollution from plastic and to suggest that we need to recycle the material. His journey went from San Franciso to Sydney in Australia and went past the Great Pacific Garbage Patch.

Since then David has published a brilliant book that details his journey and which is entitled: Plastiki: Across the Pacific On Plastic: An Adventure To Save Our Oceans. It includes memories of his crew members and also essays by guest writers on the subject of marine pollution.

I believe that as many people as possible do need to be told about this fantastic mess that endangers life. We all need to think about what happens to the plastic we throw away. I know it really saddens me to think it could end up killing a turtle or a baby gull or albatross.

Plastki: Across the Pacific on Plastic

Thanks for posting! Yes, it is easy enough to make recyling as a habit and that is what it is like for me.

My daughters and I are avid recyclers. We clean and separate all our paper, plastic, glass, tins and metals and the like. Thankfully we have a great recycling program in our city. It's so easy to do and becomes habit once you realize the need. Hopefully it will continue to catch on and take root.

There are five of these gyres so that is not the only one and they are all getting worse every day! It is very worrying and no easy answers. I was involved in taking school children here to a local beach to see how much plastic we could find. The science teacher was shocked by how much there was when I explained the problem to her and showed her. It is a worldwide problem. 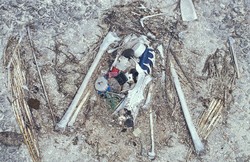 Plastiki: Across the Pacific on Plastic: An Adventure to Save ...
75%  16   5 AngelaJohnson
Environmental Pollution