Directed by the guy who later made "Tentacles," the second of the Italian "Exorcist" rip-offs that came out in 1974 is the most well-known and certainly the most popular one. But that doesn't have to mean it's particularly good, does it? No, it doesn't. But that didn't stup Warner Bros. from filing a law suit. 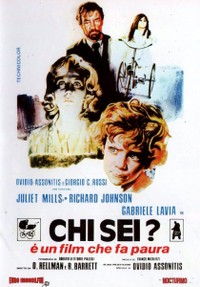 Just recently, I wrote about the 1974 Italian “Exorcist” cash-in “The Antichrist” (my review is HERE). There were of course several more movies back in the ‘70s that jumped on the bandwagon to make a quick buck from the Devil possession craze. We have the American blaxploitation version “Abby” (also 1974), which actually was pulled from theaters since Warners thought it was a blatant rip-off of their blockbuster -- personally, I found “Abby” pretty boring. In 1975, some smart-ass added new scenes featuring exorcism to Mario Bava’s 1972 classic “Lisa and the Devil”, and released it as “House of Exorcism”.

What I guess is the most well-known copy cat movie also reared its head in 1974: the Italian pea soup spitter “Chi sei?”, which means “Who are you?”, but got the title “Beyond the Door” in the States, while the Brits called it “The Devil Within Her”. I watched it for the very first time just recently. 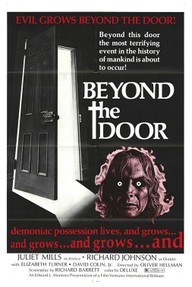 I usually prefer Italian horror to American. Italian genre movies usually had something special, and even if some of them really are quite boring, I still enjoy them more than bad and/or boring American horrors -- the worst of the Spaghetti Horrors are still more fun than recent fare like, say, “A Haunting in Connecticut”.

But this isn’t the case with “Beyond the Door,” co-directed by Ovidio G. Assontis (“Tentacles”), posing as “O. Hellman”, and starring Juliet Mills, Gabriele Lavia of “Deep Red” fame, and Richard Johnson, who was in the great, original “The Haunting” (1963) and Lucio Fulci’s “Zombie”, aka “Zombi 2” aka “Zombie Flesh Eaters”. Boy, is this sucker bad. And boring.

The version I saw was the British one, said to be 15 minutes longer than the American cut. The movie opens with hundreds of lit candles in a dark room and a Devilish voice-over that apparently belongs to Old Nick himself, who says that nobody believes in him. Then we cut to a certain Dimitri (Johnson), who drives his car off a cliff. The car freezes mid-air and we’re introduced to young Jessica Barrett (Mills), married to Robert (Lavia) and mother of two young children; the daughter is exceptionally foul-mouthed. Don’t ask me why. Maybe she’s in league with Satan. 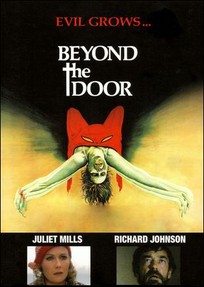 Jessica is pregnant with the couple’s third child, but something is wrong. The fetus is growing faster than normal. Jessica seems to be three months pregnant after just a couple of weeks. weird. And the poor woman starts behaving a little odd. She often loses her temper.

Robert notices that a man is following him and his family -- Dimitri; the bearded fellow from the prologue. About halv-way through the movie, Robert approaches Dimitri and learns that the old guy once was Jessica’s lover. Dimitri also says that Jessica must give birth to the child, it’s very, very important that nothing happens to it.

Meanwhile, Jessica turns into Linda Blair. Uh, I mean, she turns into your typical, pasty-faced, monster-voiced victim of a possession and spits pea soup and levitates, and even spins her head. All this because her unborn child is the Antichrist -- and Dimitri is in league with this evil entity. This because our friend the Devil saved Dimitri’s life when he drove off that cliff.

The Devil turns out to be a prankster, turns on Dimitri and kills him. Apparently, the Horned One did all this just for fun. The baby is stillborn and everything goes back to normal. Jessica’s son gets a new toy car, looking just like Dimitri’s, and the little kid throws it into the sea from a boat. Ah, what a poetic ending! 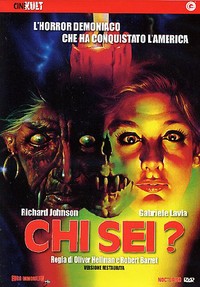 Jeez. This is bad. If my summary of the story sounds a little vague, it’s because the movie didn’t keep my interest up. My thoughts kept on drifting away. The movie is incredibly lame and boring.

“Beyond the Door” was shot on location in San Francisco, while interiors were filmed in a studio in Italy. Assonitis does his best to make this look like and American movie. It’s very glossy and lush, and he almost succeeds -- and this is probably the problem with this movie. It tries too hard being something it isn’t. It ended up somewhere between your average Italian and American horror movies. The movie also features a highly inappropriate music score; instead of mood setting melodies, we get some cheesy funk!

“Beyond the Door” may be a piece of crap, but this fact didn’t stop Warner Bros. from filing a lawsuit. The lawsuit failed, though.

The only interesting aspect of “Beyond the Door” is that there’s no exorcist or any priests in it!

There was a “Beyond the Door II” released in 1979. This is however not a sequel at all, but a retitling of Mario Bava’s very last and very good thriller “Shock” from 1977. There was a third installment in 1989, but once again, the American distributor had just retitled an unrelated movie. 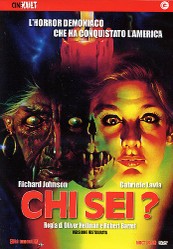