I decided to pick up this product and have it for dinner tonight. Read to find out what I thought of it.

Product Description: Boxed dinner kit from the Velveeta Skillets brand containing pasta, seasoning, cheese and salsa that is added to browned hamburger. I purchased this product this morning at $3.37 while doing some grocery shopping at one of our local stores and prepared it for dinner this evening.

My daughter had to be at the ice rink this evening and her younger sister had an afternoon doctor's appointment. So, since I knew things would be a little hectic for my wife and me, I decided to pick up something simple for dinner.

I remembered we had a pack of hamburger in the freezer and my original plan was to just get a box of Hamburger Helper. However, I saw this variety of the Velveeta Skillets brand and, since it looked interesting and I've had a good experience with the brand in the past, I decided to pay the extra $1.50 and give it a try. Unfortunately, while it wasn't terrible, I also think it fell a bit short of living up to my expectations.

I'll start out by saying, much like other products from this brand (and other, similar brands), this was very easy to make. There were three basic instructions (brown the hamburger, add pasta, water and seasoning then, after it cooks for a bit, add the cheese and salsa) that even I was able to follow.

It also wound up making quite a bit. My wife and I were both able to have seconds and, since the girls had their dinner earlier on, I even have leftovers for lunch tomorrow.

My biggest problem with this product is it ultimately proved not to be anything overly special. As I said before, it wasn't terrible. In fact, I thought it had a decent-enough flavor considering the reasonable price. But, there wasn't anything about it that really set it apart from other boxed dinners.

In fact, if I hadn't read the outside of the box and prepared the dinner myself, I honestly would have thought this was the lasagna Velveeta Skillet rather than the Nacho Supreme. The salsa I added to the pan just never stood out for me and, ultimately, I could just taste the normal seasoning and the cheese. In other words, there was nothing about it that would make me think it had anything to do with nachos.

Overall, I have to say the dinner kit was decent enough to justify the low price. However, since it did remind me a bit too much of another variety, I do feel the need to deduct points from its final score.

StevenHelmer, Thank you for all the practical information, pretty picture and product line.
Is it possible, with a reputable brand name such as Velveeta Skillets, that this was a one-off, that the packaged contents were made on Monday or Friday? 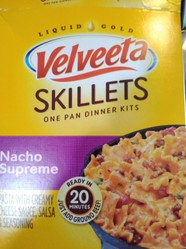 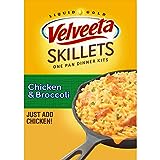