Save the Chickens: Online Chicken Games

Can you save the chickens? Put your computer to good use: engage some dueling chickens.

We all love chickens. Many of us enjoy them between slices of bread while some of us keep a few in the back yard in the hopes that a reality TV producer will discover us. Whatever the reason for our chicken-loving, we can all agree that an hour or two spent playing online chicken games is never a waste of time.

There is an alternative...

Instead of torturing online penguins, play with some chickens. These adorable birds crave your attention and your clicks.

A veritable plethora of online chicken games populate all corners of the Internet: all you have to do is point your browser at one of them and sit back as these adorable semi-flightless birds nuzzle their way into your heart. You've got nothing to loose: all these a games are free to play. The only cost comes in the form of intense emotional attachment and lost income from playing at work.

Chick Adee pits two identical baby chicks against each other in a creepy peck-fest. Use your keyboard to control each chicklet: the traditional WASD key combinations are always easy to master, especially if you've been playing video games since 1979:

Move your dueling chicks into the center of the arena and use the G and H keys to attack. The G key pecks and the H key kicks.

This game turns out to be a tremendous exercise in dexterity. One player controls both chicks from the same keyboard. It's a battle worthy of Colonel Sanders, before arthritis reduced him to a corporate figurehead.

As far as we could determine, which was about 5 minutes of hands-on research, there is a score, a winner, a loser, and no time limit.

Save for the one chick that had his head kicked off by the other identical chick, it all ended well. The chick with a head earned a point for de-heading the other chick. There's no cartoon blood, but be prepared for intense squawking by the winner chick. Click the R button in the game window to reset the combatants and replace the missing head. We couldn't determine if it was a new head or the same head.

Players can pummel their chickens ad-infinitum or until the cows come home.There may be a maximum score, but we lost interest and wandered off in search of condiments.

Do you play online chicken games?

It's tough being a chicken. You can help. Put your computer to productive use... 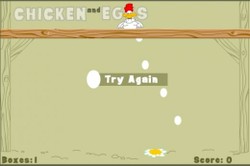 It's tough being a chicken. You can help. Put your computer to productive use by preserving the eggs of a hard-working hen.
52%  3   6 girlgames
Puzzle Games