Eminem is back with a new movie called 'Southpaw'.

Eminem, the world's “numero uno” white rapper is rumored to be making a boxing movie initially but aptly titled “Southpaw”. Eminem, whose real name is Marshall Bruce Mathers III is no stranger to the movies. He after all appeared in a well-received movie about a rapper called “8 Mile” in 2002. He turned in a really good performance, acting-wise. Although he didn't win any awards for his acting on the film, he did win an Oscar Award for the music he wrote for the film. His “Lose Yourself” won Best Original Song.

“8 Mile”, Eminem's film debut was a movie about a rapper which basically meant he played himself although the film wasn’t particularly about his life. So it was probably too easy and comfortable for him to make. “Southpaw” is a different story. Unless it's about a rapper-boxer or a boxer-rapper, the rap icon's acting abilities are going to be put to the full test. He has shown depth and drama in “8 Mile” so it will be interesting to see if he can work the same magic inside the boxing ring.

What makes this movie even more interesting is that Antoine Fuqua is also rumored to be the man given the honors to man the cameras. Antoine Fuqua is most known for his police drama, Training Day which gave Denzel Washington his second Oscar Award. Just  imagining Fuqua and Eminem together makes you anticipate and be excited about “Southpaw”. The two look like they are meant for each other. Expect Fuqua to extract the best from Eminem. Fuqua’s other notable films include Tears of the Sun, King Arthur, Shooter, and Brooklyn’s Finest.

“Southpaw” is one of those movies that can either turn out to be very good or really bad. Antoine Fuqua rarely makes a bad picture. Eminem never made a bad movie because he only made one good movie.

At the end of the day, what really matters most, at least for Eminem fans, is the fact that they will get to see their idol again on film. This is a movie that has all the ingredients for success. We have an immensely popular hip hop artist and rapper who is making his second splash into film after turning in a memorable performance in his lone movie appearance several years ago. The movie is going to be directed by the director of Training Day. It's a movie about a boxer and history tells us that boxing movies rarely fall flat on their backs. In fact, they've been snatching awards lately. Think Cinderella Man and The Fighter.

With that said, this is going to be a movie that will surely stir a lot of hype and anticipation. I, for one, is not an Eminem fan. I'm not into hip hop or rap but I wouldn't mind watching Eminem on the big screen. Also, I like Antoine Fuqua's body of work, most especially Training Day, of course. Everything about that movie was flawless. And last but not the least; I'm a huge boxing fan.

So, I’ll be looking forward for this film with nothing but great anticipation.

I like eminem a lot great review thanks for covering him

@SquidRich: I'm not a fan of the guy either or the kind of music he makes but he did show some good acting chops when he starred in 8 Mile so it would be really interesting to see how good he will be in his second movie outing...:)

I'm not the biggest Eminem fan, but this movie looks interesting :) 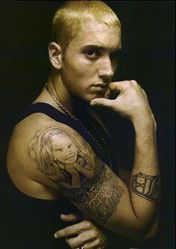