Star Wars is an excellent choice for a Halloween costume. The characters are recognizable, popular, can really attract notice.

Halloween is a fun time to dress in a costume, and popular topics are always a good choice. With the third trilogy of the three trilogies of Star Wars comes renewed interest in a popular group of characters. Some, such as Darth Vader and Yoda have died in earlier parts of the movie series, but the characters remain popular, and Yoda has already appeared after his death. And, there will certainly be new characters to fascinate us. So, as Halloween comes up or for any costume party regardless of the reason, consider a Star Wars theme costume.

The sinister Darth Vader is just right for Halloween, with his face hidden in his black helmet and a long black cape flowing behind him as he walks.  There is something scary about a costume that requires a cape.  And, the light saber can be used to light up the way as a child goes out to trick or treat escorted by you dressed as Darth Vader.

To take your Darth Vader costume to the next level add a breathing sound effect.  Darth Vader is heard approaching long before he appears, and if you are dressing as Darth Vader you should include the sound effect of the breathing.  It is an essential part of the character.

My favorite character is Yoda.  Yoda is a green character from a distant planet, and is very popular.  Yoda is characterized by his green color and his ears that have a distinctive appearance.  Yoda is the master of the group of Jedi knights and uses a green light saber.

In the early part of Star Wars Padme Amidala leads her people as their queen, marries Anikin Skywalker, and is mother to Luke Skywalker and Princess Leia.  The costume can be simple or elaborate, since she had several appearances depending on whether she was in a formal setting as a leader of her people or in a more casual setting.

The costume can be the royal outfit complete with wig of Queen Amidala, or an all white outfit suited better for more active activities.

Princess Leia often wore white, and the outfit is completed with white boots.  Princess Lela would be a good companion costume for a couple if the other were Hans Solo, since there was an eventual love interest between them.

Hans Solo was a person who became entangled in the battles of Star Wars.  In the beginning he was piloting the Millennium Falcon as a smuggler who was hired along with his ship.  He eventually developed an attraction to Princess Leia.  His costume is a white shirt and black vest, with blue pants and boots.  His is the simple costume, but can be recognized by a fan of Star Wars.

Jedi knights use a variety of different color light sabers, where the color is unique to each Jedi.  Now, multiple light sabers in a nice color assortment can be found in a single pack.  This allows several people to add a simple costume and become group of Jedi knights. 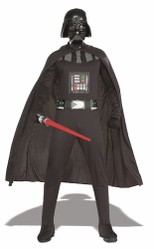