Addiction made this step in recovery a difficult one for me...

I thank God my sponsor is a patient person. I don't think I could have made it through this step without her patience. As we were looking at this step my stomach began to churn, my hands began to shake, and my mind began to race.

That word! Why did they have to use that word? Why couldn't they use nicely or politely or quietly or faithfully or calmly? Any thing but HUMBLY!!!! I mean one of the reasons I wanted to stop using drugs is so I would have to endure humiliation anymore.

After voicing this concern with my sponsor, she told me to look up the word humble in several places, writing down each definition. Then, to do the same thing with humiliation. I had to have at least three different places for each. They had to be cited after the definitions. Then, when I was finished with that I had to write about one experience I had with each of these words.

I would like to let you know that I found out there was a world of difference between humility and humiliation. Humility is knowing your strengths and weakness and not trying to be more than you are. Humility is being able to admit when you are wrong. Humility is admitting you don't know something. Humility is not having to be right all the time!

Addiction made admitting less than perfection a fearful thing.

I was raised around people who were critical and cruel. I am sure they didn't mean to be, but they were drinkers and that is just the way drinkers (and users) are. They cannot help it.

I learned very early to be stupid in a funny way, because I was not smart enough to be smart. If you could make them laugh with your stupidity, they didn't become cruel about your idiocy.

I learned very early to either be perfect at something or don't attempt it because mistakes were not tolerated. If you made a mistake you were publicly humiliated about it. Everyone would know about it before you could finish explaining what happened.

I had found a way to use these unethical things to save my ass more than once. I had become pretty good at using quite a few of them in order to keep people from finding out the truth about me and what I was doing. Did I really want them removed? How was I going to save my ass when I screwed up? Did this program expect me to become suddenly perfect?

Maybe I could ask for some of the less necessary ones to be removed. That way, I could see how this was going to work before I plunged in all the way...

"What are you so frightened of? You have already admitted them to me and to your HP. How much harder could it be?" My sponsor asked.

"How am I going to keep other people from riding my ass about my screw ups?" I asked her.

"You don't. You apologize and leave the rest to your HP." She said.

"So, this is some more of that trust stuff?" I asked.

"Yes. This is teaching you to trust your HP a little bit more." She laughed, "I told you it was progress, not perfection."

It is a journey to combining the split lives we have led...

Recovery taught me the difference between asking and begging.

This part is easy. I mean all you have to do is make a list of the shortcomings you want removed and ask Him to remove them, right?

I only wrote two?!?! Damn! Okay, I will add some more first.

I only wrote five?!?! This is going to take forever!

Get up to use the restroom. Okay, now to edit...

Get up to get another snack. Okay, now to edit...

I am just going to put all this stuff on the list and let it go at that. I will just leave this list this way and forget it until I read it to my sponsor. This is just too hard to do...

Sometimes, we need a little something extra...

My experiences with the other steps...

Step Five in recovery
I had to show all my demons to someone. I had to release the demon I really was for another to see. 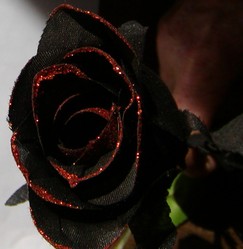