A review of one of the latest Steven Seagal movies, directed by Fred Olen Ray.

The most interesting thing about this movie is that it’s written, produced and directed by legendary B-movie director Fred Olen Ray. Ray has made movies in a lot of genres since the 1980s, and is probably most known for his horror and science fiction movies, like ”Hollywood Chainsaw Hookers,” ”Scalps,” ”Biohazard” and ”Deep Space”. Back in the ’90s, Hollywood produced a lot of so-called ”hardware movies” for the video market. Fred Ray directed some of those – and with ”Sniper: Special Ops,” he’s returned to that genre.

”Sniper: Special Ops” is yet another Sit down actioner. I must say I wonder what the negotiations sounded like when they hired Steven Seagal for this movie. ”Sure, I can do it. I can be the executive producer. I can play the lead. Just give me a chair, and remember – I don’t wanna talk to anybody during filming! And speaking of filming … I prefer not being in front of the camera.”

The DVD sleeve says ”Seagal” and ”Van Dam” above the title. First of all: no, they haven’t misspelled Van Damme, as in Jean-Claude Van Samme. Van Dam refers to professional wrestler Rob Van Dam. I must say I was surprised when it turned out that neither Seagal nor Van Dam plays the hero. Nope. The story’s hero and the movie’s real lead actor is Tim Abell; a former US Ranger and a pretty good actor.

This movie uses the same sets that were built for Clint Eastwood’s ”American Sniper.” Steven Seagal plays Jake Chandler, the world’s best sniper. He’s one of Sergeant Vic Mosby’s (Abell) men. Mosby and his guys are in Afghanistan, where they’re going to rescue a kidnapped American Congressman. They do so, but while getting out of the Taliban village, one of the soldiers is wounded. Jake stays to help the injured soldier.

Mosby and his men – Rob Van Dam is one of them – get a new mission; they need to find and retrieve a truck filled with ammunition. They find the truck, but decide to go back to the village to rescue Jake and that wounded soldier. Oh, and there’s also a female reporter who tags along.

”Sniper: Special Ops” has nothing to do with the 1993 movie ”Sniper” and its sequels. And it’s not much of an action movie. This is a dialogue driven drama, with a couple of brief action sequences in the beginning, the middle and the end. They talk a lot in this movie – which looks like it was filmed in a quarry.

And: Steven Seagal, who never takes off his sunglasses, is hardly in the movie at all. Altogether, he appears for 10-15 minutes. And during most of these minutes, he’s sitting down. On a chair.

All of Seagals scenes have been shot separately. He’s acting solo. He spends most of his scenes in a tiny room along with that wounded soldier – but they were never there at the same time. If Seagal’s character needs to interact with somebody else, Ray had to use stand-ins. We see a shoulder or a hand in the foreground. Seagal, looking more uninterested than ever, probably shot all of his scenes in a day or two. He doesn’t fight in this movie; no martial arts moves at all, he doesn’t run, he hardly walks. He shoots a handful of Talibans with his sniper rifle, but that’sall.

… And yes, he whispers all of his lines and it’s sometimes hard to hear what the hell the guy is saying.

Rob Van Dam is more or less an extra with very few lines.

Fred Olen Ray’s son Christopher also worked on this one. 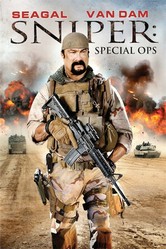