Everyone just loves the Smurfs. Who can resist these cute and very adorable little blue characters? They just brighten everyone's day.

Every person who sees the Smurf characters would find these little blue creatures so adorable and so cute. They don't only bring enjoyment to little kids but also to older people. Stores as well as many Smurf product reviews online indicate that not only little kids do love to collect them but also adults.  Their clothes have also become popular as more and more people love to wear the same style in parties and other holiday events. A Smurf party is also one of the most requested theme events by many children and even adults.

The Smurf characters were created on October 23, 1958 in a Belgian comic strip by a French cartoonist, Pierre "Peyo" Culliford. It started its original TV series on NBC in 1981. The Smurfs are child-sized little blue characters. They live in the safe King Gerard's forest where there were no hunters or poachers allowed as per the order of the king. They live happily in their little village with their mushroom houses. Their worst enemy is the sorcerer Gargamel who had a pet cat named Azrael. Azrael adds to the sufferings of the Smurfs as he is always looking for a very delicious and tasty blue snack.  The Smurfs show was very popular. The new movie that came out last July 2011 made it even more popular to the younger generation.

Papa Smurf is the leader of the Smurf community. When things go bad in the whole community, the Smurfs turn to him for advice. Aside from Grandpa and Nanny, he is the oldest in the community. He is killed in the making of potions and some magical spells. He is characterized wearing red clothes, red hat and with his popular bushy white beard.

Smurfette used to be under the influence of Gargamel. Gargamel created her in order to invade the Smurfs. However, she was later transformed by Papa Smurf from the evil Smurfette to a very lovable one. She is the only female character in the Smurfs until this time.

Aside from Papa Smurf and Smurfette, there are also many more Smurfs who live in the Smurf community. They also have their own adventures and misadventures in the Smurf world which makes their everyday lives more exciting. Clumsy for example, always trips over things which results to accidents. Jokey loves playing jokes with everybody. His way of joking is by giving away presents to everyone, presents that explode.

Brainy Smurf is someone who thinks he knows about almost everything in this world. He is the "Mr. Know It All" of the whole community. He wears glasses and this attitude of his annoys everyone. Grouchy on the other hand, complains about almost everything in the Smurf world. Other characters are Baby, Barber, Dreamy, Painter, Tailor, Scaredy, Tracker Smurf, Vanity Smurf, Wandering Smurf and many more. Later on, the Smurflings were introduced. Among them were Nat who loves nature, who usually has a leaf or something on his hat. Slouchy who always slouches while Sassette is always outgoing and confident and there was also Snappy.

Gargamel is the evil sorcerer who is the nemesis of the Smurfs. He loves making potions and its not depicted that he has any real magical powers. His main goal in life is to capture as many Smurfs as he can so he can create more potions in order to turn base matter into gold. It is his goal to destroy the Smurfs totally and one way to realize this plan was to create the evil Smurfette who was later on turned by Papa Smurf into a good one.

Gargamel and his pet cat, Azrael

The Smurf family lived in their little mushroom houses. They lived a simple and happy life until the evil Gargamel made their lives in danger. However, his evil plans were not always successful. This very cute and colorful cottage would be a wonderful addition to your Smurf characters and accessories collection.

Christmas is now so near and the year 2011 is almost ending. Many people are already making their own lists of their Christmas gifts and are also becoming so busy with their shopping. One very useful gift that you can give to your family and friends, most especially those kids or even adults who love the Smurf family is a Smurf 2012 calendar. This will be a very useful guide to their everyday activities and would add color to their walls or office and study tables.

Another Smurf movie is in the works to be released in August 2013. Why do people don't get tired of them is not the question. The happy and clumsy nature of the Smurfs remind us of how we are sometimes too. Though we take life so seriously, there are times that we also have to see the brighter and funnier sides of it. We may face life's too many trials everyday, what's important is that we try to fight and do our best to succeed and be happy with everything we do. This maybe another reason why we love the Smurfs. They remind us that we need to have a litle clumsiness and fun in life sometimes too. May you have a happy Smurfy day! 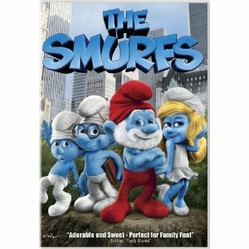