Checking out gift ideas for fans of True Blood's Sam? The internet has exactly what you need in stock, come on in and let us serve it up!

There may be a wild streak shifting in there, but Sam Merlotte is Mr Dependable. No matter what's thrown at Sookie, you know that her boss will drop everything to make things right.

Fans of Sam Merlotte know a good man when they see one. If the world was a good, just and righteous place, then the waitress would be his lady. Even Sookie knows that. But then there's the whole 'dating your employer' thing, and the fact that she tends to go for men who lust after her blood above all.

While there's a chance that she'll see reason, we have Team Sam gifts for those cheering him on.

In 2012, Rittenhouse finally got around to releasing a True Blood Trading Card Collection. With 96 base cards and several rare goodies thrown in, this became a quick draw for collectors and True Blood fans alike.

The rarest elements are the Shadowbox cards. Only four characters ever featured in one of these, and they were inserted into just 1.72 packs. Fortunately Sam Merlotte was chosen, along with Sookie, Bill and Eric. The 3D True Blood Sam trading card is for true collectors only.

All About True Blood's Shifter Sam

By the time True Blood began, Merlotte's Bar and Grill had been established in Bon Temps for years. Its owner Sam was a respectable member of the community, and Sookie Stackhouse was a waitress there.

Sam had a definite crush on her, but never did anything about it. It took the arrival of Bill Compton for the shifter to finally make his move. By then, it was a bit too late.

Nevertheless, Sam and Sookie have tested their waters with the occasional snog. Unfortunately for him, their relationship has never strayed too far from a great friendship.

Which isn't to say that there haven't been other love interests. Team Sam might be better off pushing for Tara or Luna, than waste any more time on the whims of telepathic waitresses.

But throughout it all, Sam has proved that he's loyal and steadfast. A true woman's best friend.

Enjoy again the great moment when Sookie finds out that Sam is a shapeshifter. NB: Strong language in one instant.

Anybody who's on this page has probably already made their choice, and it's the sensible way to go.  Vampires ultimately only want blood and werewolves have all that pack politics to contend with, not to mention the propensity to get a little rough.

But Sam is human. Ok, there's that whole turning into a dog thing going on - or whatever other animal he wishes to become - yet nothing here is shifting the fundamental fact that he's human.

Team Sam is all about not crossing species in this love match.  Especially when the human option is so yummy!

Sookie and Sam get philosophical in a hospital waiting room. NB Strong language throughout.

These funky Sam Merlotte merchandise have been created by Team Sam for Team Sam. They are the perfect presents for those who see the worth in their favorite shape-shifter.

That last one...!  Bless him!  Shifting into a dog might not be as rock-n-roll as a werepanther or a vampire, but it's certainly cute.  Plus it's much safer to have him around the house than some of the creatures knocking at your door.

Team Bill: True Blood Gifts
After gifts for fans of Vampire Bill? Or maybe it's you who deserves a little Bill Compton loveliness in your life? Check out what's on offer!

Team Eric: True Blood Gifts
Looking for gifts for fans of Eric Northman? Or perhaps you want to treat yourself to a juicy bit of Team Eric merchandise? Come on in!

Team Alcide: True Blood Gifts
On the hunt for gifts for fans of True Blood's Alcide? Come see what treats we have in store for you!
Updated: 06/18/2013, JoHarrington
Thank you! Would you like to post a comment now?
9

I can't argue with that! And I've seen him season 6 episode 1 now - awww! Poor love.

Very pretty man in a rugged kind of way

It's quite easy to keep shifting allegiance as time goes on too. I want ALL of them to succeed, which, of course, isn't quite the done thing! Poor Sam does deserve to get the lady though.

And I thoroughly recommend True Blood. The sixth season begins in the US tonight. Us in Britain will have to wait a little longer though. *sad face*

Haven't yet looked into True Blood, but it's looking interesting as I read your articles. And the kinds of goods that are made for fans of a series, some creative ideas lurking there. 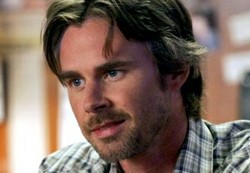 Hosting a vampire themed party to watch True Blood? There are loads of costumes and supplies to bring Bon Temps to your home.
95%  14   8 JoHarrington
HBO

A spoiler-free review of the first season of True Blood. Explore a world where vampires have integrated with society in 21st century USA.
Loading ...
Error!