Tungsten carbide has become increasingly popular, highly regarded for its nearly indestructible nature and its durable, low-maintenance finish, and is also valued for being more affordable than other precious but weaker metals.

Tungsten jewelry now comes in a variety of styles, including those designed for niche groups like the Freemasons, with laser engraved square and compass designs for a subtle, functional piece of jewelry that will last for generations.

What is Tungsten Carbide?

Tungsten carbide is an alloy formed by combining tungsten with...wait for it...carbon. This gives the metal its renowned durability, while still being resilient enough to endure powerful impacts. In fact, it's one of the strongest materials out there, needing a diamond or other super-strong substances to cut it. Tungsten registers around a 9 on the Mohs scale, which is a measure of hardness; diamonds are a 10. This makes tungsten jewelry nearly impervious to scratching, meaning you won't have to remove a ring to do any kind of work that might damage other pieces of jewelry.

Because many people use "tungsten" as a shorthand, the term is often confused with tungsten carbide, but there isn't really any jewelry made of pure tungsten. Tungsten by itself is too brittle, requiring the carbon to make it strong enough to last. The jewelry marketed under either of these titles is very likely the same sort of material, either of which will include the carbon content to increase durability.

Because of the durability, tungsten is now used for a variety of jewelry, with laser engraving able to produce beautiful designs, such as the Masonic square and compass cut into the rings displayed below. The high scratch resistance of the metal ensures that the symbol will endure, remaining legible for...a long, long time. 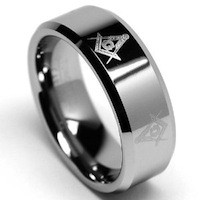 Tungsten carbide has become popular for a number of reasons, outshining its shinier metallic cousins with a number of functional advantages:

Click to view more options and buy online from Amazon!

A few things to know before buying tungsten rings

The disadvantages of tungsten carbide rings and other jewelry is rather slim, but of course they're worth mentioning:

Tough as tungsten, black as onyx

Tungsten is naturally a grey color, but a number of manufacturers offer a black or dark grey finish to their jewelry to give it the same appearance as onyx or other deep as night materials. This is generally accomplished by applying a titanium coating to the surface.

While titanium is very strong, it's not quite as strong as the tungsten underneath it, so it is possible that it will become scratched. Some manufacturers offer a free refurbishment service if this is the case, though of course some might prefer the weathered appearance of a heavily-used piece of jewelry.

Words of wisdom on tungsten

Because tungsten is becoming increasingly popular, it's important to look for jewelers that back their products with quality service, and use quality materials. Remember to avoid cobalt content, as it can cause allergic reactions, defeating the purpose of hypoallergenic jewelry.

Aside from that, a tungsten ring should last for generations, with little or no maintenance, and for those who prefer durability to flashiness, this is a great way to go. So pick one up, and enjoy it for generations.

Tungsten Spinner Ring
Near-indestructible tungsten carbide rings last forever, look great, stay shiny, and they can have spinners too!
Updated: 05/03/2012, eslevy17
Thank you! Would you like to post a comment now?
1

The most cherished gift your Valentine will ever receive is a ring. Women rep... 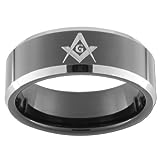 Some of these rings come with semiprecious or precious stones, like black and white diamonds, sapphire, marcasite, topaz, aquamarine, and citrine. They make great Christmas gifts.
90%  14   7 katiem2
Rings 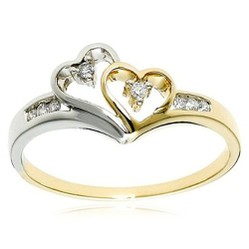 The most cherished gift your Valentine will ever receive is a ring. Women report rings to be their most favorite gift hands down. It's the gift they may not ask for but want most.
Loading ...
Error!