The Gamecocks are a powerhouse of the SEC, one of the hardest conferences in college football. Its no surprise USC tickets go so fast.

The University of South Carolina Gamecocks have a long tradition of exceptional football that rivals any. They play in the Southeast Conference with teams such as the Alabama Crimson Tide, the Arkansas Razorbacks, the Auburn Tigers, the Florida Gators, the Georgia Bulldogs, the Kentucky Wildcats, the LSU Tigers, the Mississippi State Bulldogs, the Missouri Bulldogs, Ole Miss Rebels, the South Carolina Gamecocks, the Tennessee Volunteers, the Texas A&M Aggies, and the Vanderbilt Commodores.

The first team the University of South Carolina had was not sanctioned by the University and had to buy their own uniforms and train fare. Their supporters wore garnet and black, a tradition that continues today. They lost their first game due to inexperience and lack of practice. The team won it’s first game in the third season in 1895, beating Columbia A.A. The following year the team got it’s first head coach, W.H. “Dixie” Whaley. In 1896, the first game against Clemson was played. Clemson would go on to become an arch rival of the Gamecocks. From 1902-03, coach C. R. Williams led the Gamecocks to an impressive 14-3 record.

In 1906, the University banned participation in football after faculty complaints about the rowdy chants the students would yell during games. They were so harassed by petitions from students and alumni that they quickly removed the ban, allowing for a short 1907 season.

From 1928-1934, coach Billy Laval led the Gamecocks to seven consecutive winning seasons and a 39-26-6 overall record. Under Rex Enright, the Gamecocks produced another undefeated Southern Conference season, going 4-0-1 in 1941.

Paul Dietzel coached from 1966-1974, retiring with a 42-53-1 overall record. He is credited with writing the fight song that is still used today.

Jim Carlen was coach from 1975-1981, and is largely recognized as bringing the Gamecocks into the national spotlight. Carlen led the Gamecocks to three bowl games, producing a 45-36-1 record during his career.

Joe Morrison took over as head coach in 1983. Known as “The Man In Black”, he took the Gamecocks to a 39-28-2 overall record, three bowl games, and three seasons with 8 or more wins. Due to his image, Morrison remains a popular figure in Gamecocks history.

Lou Holtz was hired as South Carolina's head coach in 1999. He inherited a relatively young SEC program, and finished 0-11 the first year. He quickly improved the Gamecocks fortunes, however, finishing his career at 33-37 in 2004.

Steve Spurrier was brought on in 2005 to replace the departing Holtz, leading the Gamecocks to a 7-5 record and Independence Bowl appearance in his first year. As a result, Spurrier was named the 2005 SEC Coach of the Year. In 2010 he lead the Gamecocks to their first SEC Eastern division championship by defeating his old team, the Florida Gators in their own stadium. With that kind of record it's no wonder why USC tickets are so prized.

Florida State Football tickets
The Seminoles are a very exciting team to watch. Get your tickets today! 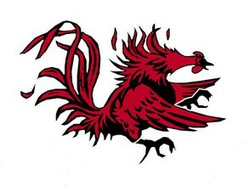 This article is about the Virginia Tech Hokies. It includes school and team info and stats.
24%  1   3 Chrisbyron1
American Football