Blood on their Petticoats

This is a fascinating historical fiction book with a very appropriate title and cover picture. Well researched and hard to put down.

Introducing this excellent book which is painstakingly researched and passionately written
The novel shows the sharp contrast between the central characters early, privileged life and the shock to the system when encountering the terrible conditions in the hospital. It is based on the actual conditions at the time of the Crimean war
The writing is very descriptive both about the conditions the profiles of the characters and their emotions. Some of the desciptions are not for the faint hearted and Geri Humphries has the knack of making us feel as though we are observing it all first hand.

The central character has had a more fortunate childhood materially than a lot of people at that time and is aware of it. We are clearly shown the relationship between her and her parents and servants.

She has heard a lot about the work of Florence Nightingale in the Crimean War and wishes to be involved, helping people in the most tragic of circumstances.  There is a lot of opposition from her middle class family, as nursing was not seen as a respectable occupation but her determination overcomes that. Humphries show the differences between attitudes towards women in that time compared to now.

It is possible to empathize with Isobel's determination and passionate feelings about helping people in the war and her Father's very real concerns for her safety. The contrast between her early life and new situation is difficult for her to deal with but she does so stoically and in a resolute way.

She is shocked when she sees the hospital for the fist time, there are upsetting scenes about people dying in filthy, blood-stained wards and the sheer volume of work needed to improve the unsanitary conditions.We can feel Isobel's frustration as the author leads us expertly  more deeply into the plot.  She finds her strong sense of justice is challenged frequently and the main character feels she has learnt a lot from the experience.

She makes strong friendships with the other nurses and there is also a bit of romance in the story, despite the characters having so little time.

This is a wonderfully written book making a compelling read, made all the more poignant because it is based on fact.

Get this book on Amazon

As the author, I would like to thank whoever gave Blood on their Petticoats the above review. Unlike some who have commented, you seem to understand the very essence of my story. The novel is now available from Smashwords for $1.99. https://www.smashwords.com/books/view... 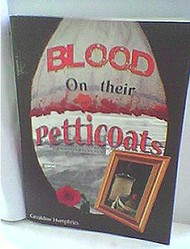