If you enjoy campaign keepsakes, an Etch-A-Sketch toy will be a good one to hold onto from the 2012 U.S. elections.

Mitt Romney has become known for gaffes. No matter your political leaning, this is a fact that cannot be ignored.

If elections were decided by trying too hard, Mitt would win every one by a landslide.

Still, his 2012 campaign's biggest gaffe did not even come from Romney's mouth. It was one of his campaign's advisers who compared Romney's take on Fall 2012 (should he garner the GOP nomination) to using an Etch-A-Sketch. Reveling in a win in the Illinois primary, Eric Fehrnstrom said about national campaign strategy versus primary strategy, "(The fall campaign is) almost like an Etch-A-Sketch -- you can kind of shake it up and we start all over again." He was attempting to speak about how a national campaign's start is a sort of "reboot", but oh, how he failed!

"(Y)ou can kind of shake it up and we start all over again." -- Eric Fehrnstrom (top Mitt Romney campaign adviser)

What a quote! It is one of those times where the message someone wanted to convey collides with the reality of what came out of their mouth -- and reality wins!

As a result, Etch-A-Sketch makers Ohio Art Co. are winning, too. (Romney's challengers Rick Santorum and Newt Gingrich have tried, but have not gotten as much traction from the gaffe as they might like, despite carrying the toy up to recent podiums.)

Sales of the Etch-A-Sketch have boomed in the wake of this gaffe, and may well continue to be up throughout 2012. People holding up Etch-A-Sketches at campaign rallies is the new protest sign for 2012. (It appeals to folks who like a little humor with their protest, perhaps.)

If you are so inclined, you can buy your own new Etch-A-Sketch to commemorate this year's election season in a funny, cheeky way. In case you are indeed so inclined, I have taken the liberty of noting some Etch-A-Sketch models you might well consider below.

I call it the "Protest" Etch-A-Sketch. It is really the much beloved toy from childhood known as the "Classic Etch-A-Sketch Magic Screen".

Millions of Americans recall growing up with these great catchers of imagination. A few have even drawn interesting art upon them!

What image or message would you draw on yours to commemorate or protest this year's U.S. presidential campaign goings on? What goes on your keepsake Etch-A-Sketch is up to you!

Exercise your freedom of speech and draw the candidates a message you need them to see! Something like, "I'm not wearing any pants!" (I don't know. I am not a professional protest message writer!)

You never know when you might feel the need to show your feelings related to the 2012 campaign.

That is why the Pocket Etch-A-Sketch is on your side.

Draw a tiny protest sign you can (carefully) show amidst a campaign rally.

Just be careful not to "shake away" your important protest message!

Because you never know when you might need an ink pen with a quite small Etch-A-Sketch attached to it.

Imagine the on-the-spot campaign platform reworking that could be done with this device!

Or, you could just use it as a play thing. I Regi B., will neither dictate nor criticize what is to be done with your Etch-A-Sketch pen.

YouTube Videos Show Romney Getting It from all Sides on this One!

Obviously, I have tried to make light of this whole Romney Etch-A-Sketch thing. Whether or not you are "pro-Etch-A-Sketch", do make light, too. Humor is what gets us through the trials and tribulations of life, like those presented by an election year. :-D 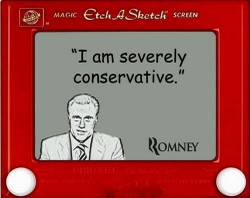 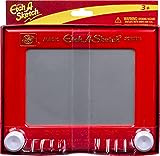