Crocodile drug is horrible new drug on the market. It mutilates its user, and often it kills the addict after very first injection of this heroin alternative.

Many new drugs were released to the market for hopeless addicts, who are in constant search for cheap solutions for their hunger for drugs. Heroin is very expensive, especially the pure one. Amongst various new substances, Crocodile (Krokodil, Zombie) drug is the most dangerous one, it seems. Its effects on one's health are horrible, and beyond imagination, but the cost is very low, and it is more powerful than heroin by few times.

My personal experience with crocodile, and it wasn't animal I could run from!

A month ago, I was working in ER and the female patient came in asking for help. She was holding her left arm flexed in front of her body asking me to check it. It was winter time, and the snow was really thick. So, I assumed she fell and broke her arm. I assumed she was 35 years old, or something like that. I never was good at guessing one's age, but this time I was sure she was in her 30s.

She seemed really sick, and in pain too. I asked her to come in, and to take off the jacket and shirt, to see that arm. N. did it slowly. It seemed really painful. When she took her shirt of, I was shocked to see in what condition her forearm was. Whole forearm was green and blue, dry, with deep fissures, and one centimeter deep ulcer on the surface. The ulcer was penetrating muscle tissue, and almost reaching the bone. It was 4 centimeters in diameter, obviously still active and spreading.

Patient wasn't able to move the wrist, and the hand was out of the function too. Nerves were damaged, and the wound was infected. Around the elbow, I noticed purple strings, warm, and very painful on pressure. It was phlebitis, an infection of the veins.

N. had high temperature, she was covered in sweat, pale, breathing deep and frequently. I knew she had severe infection, possibly sepsis. But what was the cause? It must be some previous deep damage of the forearm. This way she would bring bacteria deeper in tissue, which would later lead to this.

My first two questions were: "When did this happen?" and "What did you do?"

Did you know there is such drug on the market?

This can happen to any of us. Our close friends, children, family is in danger!

No, I didn't! I was surprised after reading about this drug.

This is just scarey!

No, I haven't heard about it.

WOW this ever changing world of high is something I, as a parent, intend to stay abreast of. I had no idea! Thanks

First intake of this poison is often the last one!

This epidemic started in June 2002, when few strange cases of gangrene, phlebitis, and deaths occurred among addict population in Siberia, Eastern Russia. The Zombie drug, as they call it in western world, or Crocodile in Europe, Krokodil in Russia, or desomorphine in medicine, is Killer drug in all languages. This is in other words poison, known for its low cost, and more powerful effects than heroin. Once used, and it turns you in addict. But also, it cripples you, mutilates you, and kills you very fast.

It is drug for poor. So, there in no place to wonder how is it possible someone uses this. When you have need, and you are addict in crisis, and the only thing you lack is money, you will try anything to  put your body at peace.

Looking from perspective of a man in 2012, this was Blitzkrieg done by this drug. It can be found in almost every country in Europe and Asia. It took epidemic scale in Russia and Germany. And now, I know it came to my country too.

Knowing the Devil: Explaining the Structure of Crocodile Drug

It is derivative of codeine, known as desomorphine.

Codeine is medical substance used for treating mild to severe pain, cough, and diarrhea. It is derivative of opium, and it is cheap medicine. You are not required to have prescription in most countries to buy codeine in pharmacy. In the medical institution where I work, this substance is used mostly for treating severe respiratory infections, which are painful, and cough is resistant to most of other drugs.

Desomorphine is known to science for long time, and it is highly unlikely to cause such symptoms my patient had. It is because homemade "Krokodil" is mixture of desomorphine, red phosphorus, iodine, light fluid, and some other dangerous substances. All of these ingredients are cheap, and addicts can get them easily. Some boiling is needed, of course.

After process of boiling, dense and orange crocodile drug is the result. Desomorphine made this way is highly impure, and contaminated with all sorts of corrosive and toxic byproducts.

After just reading what substances one needs to prepare this zombie drug, everyone can understand  why is it so popular, but also, why is it so deadly and devastating to your body.

My Patient Was a Victim of "Zombie Drug"

She admitted to me she was drug addict, and she wanted to buy the heroin. But someone gave her this thing. She used other expression, but I am trying to be polite, here.

I remember of reading somewhere about new heroin alternative, that is cheap, but devastating. I never paid some great attention to this, but I kept it inside of my head, for just in case...

Here she was, an addict, Crocodile victim, 20 years old girl that looked like she was 35. She is going to loose her forearm, she is going to be on powerful medications for long time, and she almost didn't  make trough the severe infection she had.

Be smart! Be your own boss! Don't let some drug to own you!

The Origin of the Name and Prognosis

This addictive substance was given the name Crocodile (Krokodil in Russian; Russia was first to talk about the new drug) as descriptive name for the skin condition that announces the rotting of the tissue. First sign are seen on the skin. Drug turns skin scaly, just like it is case with crocodile skin.

Term "zombie drug" is from the look of the person after few months of substance abuse. Gangrene is final stadium, and the only cure is radical amputation.

Aside from skin, this drug affects inner organs as well. Liver, brain and kidneys are affected the most. Damage on these organs is cause of death in most cases. Only few addicts live more than 2 years, and the psychiatric treatment is unlikely to end with remission.

What Is Addiction and How to Fight It?

In this new, exciting article, Katie writes about addiction, how to avoid co-dependency, and what to do if someone close to you is an addict? There are lots of types of addictions: from those addictions to chocolate and video-games, to those addictions to drugs: just like to one of those similar to Crocodile drug.

Katie, in her article, goes through the most common co-dependecies and advise us how to deal with them. She writes from her own experience, adding strong personal touch to the story. Something you don't want to miss:

Avoid Co-Dependency The War on Addiction
Regardless of the addiction it is extremely hard to live with someone who is addicted to anything. The role of co-dependent is an easy role to fall into, learn how to avoid it now.

An Other New Age Drug! Something You Need to Know about!

See Some Disturbing Photos of Crocodile Addicts
I didn't add images to this article for reason...

Rabies: The Oldest Disease, Yet Without Cure
Article on an other interesting disease. Read about Rabies, and find out interesting new informations on Rabies.

That is sure thing, David. People must know what they could be dealing with.

Thank you for the warning. This information must be more widely known.

I am happy to see people is finding out about this drug more and more, and about its horrible side effects. Knowledge is power!

Thanks for bringing this to everyone's attention. I had no clue!

@sheilamarie:
That is right, they really do feel invincible. That is why it is so hard to explain things to them. Sad thing is, that most of us learn things trough making mistakes. Sometimes there is nothing after the mistake.

@ Katie:
Always appreciated your comments, Katie. Knowledge is our weapon, I guess.

I appreciate the information you have shared. This is very scary, especially as many young people try things without thinking through the consequences. They can feel invincible.

This shocking and yet I know this is an area where greed motivates those who create such methods and other drugs to do so. Its due to awareness like this we can be informed and proactive in the fight against drugs in our schools and community. Thanks great article.

I sounded like science fiction to me, when I heard about it for the first time. But I am afraid it is not.
Thank you for your comment, zteve! I really would like the world knows about this drug. It is too late if someone chooses to try it not knowing what it is.

I had never heard of this before and I find it really shocking. Thanks for bringing it to public attention. 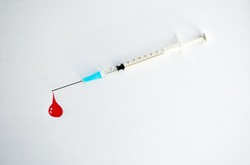