DC Universe and Lego have produced new Lego figures of all the comic superheroes that we know and love. The new range are 4 times bigger that the popular minifigures.

Such is the competition in the Toy market that Hasbro Transformers are now in brick format (as KREO) and the most popular ever Lego Batman is now almost transformer like in appearance. DC comics and Lego have produced these new figures that are 8 inches tall and are based on superheroes that appear in the DC comic book range (Marvel comic heroes will also appear as Lego have that franchise too).

These are the two most popular figures in the new Ultra range and each of them stands a full 8 inches tall which is a big increase factor on their minifigure versions of only 2 inches high. They are reasonably priced too at under $15 each. Some mini Lego figures are dearer that that especially newer ranges like Lego Friends, Star Wars and Batman.

The toys are marketed under the Lego Ultrabuild title (flexible building system) and feature Superheroes from popular comics. The come with extras; for instance, with Batman there are as 2 swords (which can be slotted together) and if you combine him with another Ultrabuild model his size can be increased. The Joker, with his blaster weapon (included) in the kit, spreads chaos through Batman's Gotham City and is the ideal complimentary toy if you purchase Batman. While the kids will be happy with one figure to play with, they will be especially delighted with a baddie as well.

Several other DC Universe Lego characters will become available as time goes by and the most recent one is Green Lantern Lego. All of the DC comic Lego figures in the Ultrabuild series are flexible and have the ability to be twisted and contorted into numerous poses. This is achieved by a fully interlocked ball and socket mechanism which gives the figure its mobility feature. The Green Lantern figure comes with his morning star weapon as an attachment but the bonus is that he can be combined with Batman to make a bigger figure.

Newer figures due in Lego Ultrabuild

By combining the parts of any of these Lego men (you will need more than one superhero) you can transform your favorite character up to new heights. Each hero on average comes with 40 pieces. By stripping one figure and then using the parts you can create a super powerful Joker who will dwarf Batman.

Batman Lego is the best selling toy from the building brick manufacturer. Hardly surprising really that DC comics and Lego have combined to promote the Caped Crusader (I prefer CC to the Dark Knight). Thanks again, Katie, for visiting my articles.

Batman Universe lego figures are sure to be a huge hit, love both batman and legos, so you can't go wrong. 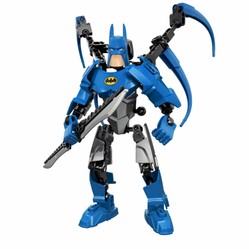